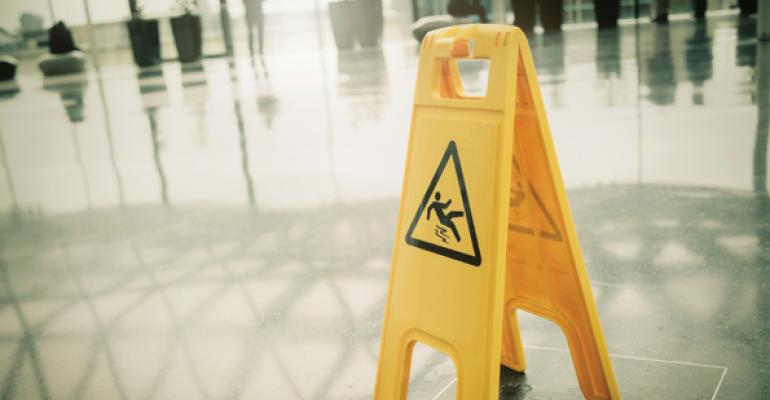 What better place than Florida, the retirement capital of the world, to see how registered reps can screw up selling something like life insurance.

Take the case of the Poughkeepsie, N.Y. brokerage firm, Prime Capital Services Inc. and its financial planning affiliate, Asset & Financial Planning Ltd. The companies are among defendants charged by Florida’s Office of Financial Regulation on July 10 with deducting asset management fees from clients’ variable annuity accounts instead of from their brokerage firm accounts.

The state claims the deduction of management fees from the annuity was seen by the insurance company as a withdrawal, and thus negatively impacted client benefit riders, which guaranteed annual bonuses and premium protection regardless of stock market losses. “The firms and their associated persons owed a duty to their customers to ensure they were aware of this matter,” the state charges in its suit seeking restitution for clients in Sarasota County circuit court. 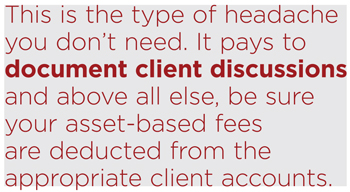 The defendants responded to an earlier state administrative complaint related to this issue, blaming the insurance company—Jackson National Life—for failing to notify them of a change in procedures.

Meanwhile Jackson National Life says this is a regulatory matter between the state and Prime Capital.

This is the type of headache you don’t need. It pays to document client discussions and above all else, be sure your asset-based fees are deducted from the appropriate client accounts.

Also be careful when assisting clients with fixed income or equity-indexed annuities. Make sure the customer understands how the product works and the insurance guarantee.

A savvy couple from Palm Beach, Fla., who wish to remain anonymous, told Rep. magazine that when their high-yield bank certificate of deposit matured, they were unhappy with the low rates then available and wanted to find something higher. They were directed to the bank’s broker—some 25 feet from the bank teller windows.

Even though interest rates of the best FDIC-insured bank certificate of deposits were running less than 2 percent, that broker promised the annuity would yield at least 3 percent. They also could withdraw some money, if necessary, and not lose principal!

The broker told the couple the coverage by the FDIC was no more of a guarantee than coverage by that annuity’s insurer. This was a big mistake.

Tax-deferred annuities are protected automatically by your state’s Life and Health Insurance Guaranty Association, assuming the insurance company is licensed in that state. Coverage varies, but annuities often are protected to $250,000.

“State insurance guaranty funds have two major deficiencies when compared with FDIC,” notes Advantage Compendium, a St. Louis-based consulting firm in a 2011 report. “First, federal insurance trumps a state guaranty when it comes to creditor risk. Second, if a bank fails, money from FDIC covered accounts is available almost immediately….If a bank isn’t found to take the account, the U.S. Treasury sends out a check the following day to the account holder that pays up to FDIC limits. This is true even if the FDIC insurance fund is depleted, because the FDIC has access to the U.S. Treasury.”

In the worst case with an insurance company it can take years to become whole if a carrier fails, the report acknowledges.

In addition to misleading the couple on the guarantees behind the annuity, the broker had neglected to mention that there was a schedule of surrender charges over the first seven years of the policy. According to actuary timetables, the potential buyer here had a life expectancy of four years.

Joseph Borg, former president of the North American Securities Administrators Association, says there are a lot of problems with selling fixed annuities to seniors. He advises registered reps to never put an elderly client into an annuity with a back-end surrender charge that is longer than his or her life expectancy.

Florida is not the only place financial advisors can get into hot water. An Iowa Supreme Court ruled in July that a life insurance agent owes a duty of care—not just to the client but also to an intended beneficiary of a life insurance policy.

The problem arose when a Farm Bureau Life Insurance Co. client died without filing necessary paperwork that would make his wife sole beneficiary, as opposed to sharing a payout with the grown daughter from a previous marriage. He told both his wife and insurance agent that was his wish. The insurance agent verbally assured the woman the money was hers. When she went to collect, the insurance company refused to pay the entire amount, instead insisting the paperwork was never changed and that the daughter has a claim to a portion of the proceeds.

She sued, but a lower court argued that without written authorization, the agent was powerless to make any change. That decision was overturned in the State Supreme Court after his wife successfully argued that after being told she was the sole beneficiary, she had no reason to ask anyone to take further action, and that the insurance agent owes a duty of care to intended beneficiaries.

The lesson here: Be sure to probe clients about who they want as intended beneficiaries before and after they buy life insurance, be proactive in helping them fill out the necessary paperwork, and above all be sure all parties–yourself included—understand the mechanics of what you are selling.

Otherwise you too could end up in court.