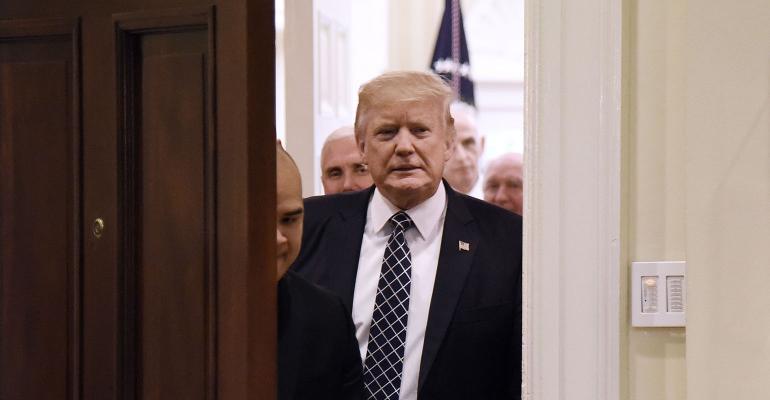 Your Client's Money in Trump’s First 100 Days: A Highlight Reel

From financial regulation to student loans to taxes, here’s what just happened, good and bad, and what to watch in the days to come.

(Bloomberg) --The long-term impact of a new presidential administration's early acts is almost impossible to assess. That hasn't stopped some from making weighty pronouncements on Donald Trump's first 100 days, including Donald Trump. And it won't stop us.

With that, Personal Finance offers these tentative thoughts on the Trump team's words and deeds so far and their implications for investors and consumers, with more definitive reports to come.

Financial regulation is under the new administration's microscope, and consumers will see some restrictions lifted from their financial services providers. President Trump has called the Dodd-Frank Wall Street Reform and Consumer Protection Act of 2010, enacted in the wake of the 2008 financial crisis to strengthen oversight, "a disaster" and suggested that it restricted lending to small businesses, among other things. An easing of restraints could free up some capital for banks and other lenders, though it isn't clear how much of that would flow to borrowers.

On May 4, Treasury Secretary Steven Mnuchin is due to report back to the president on a broad review of financial regulations. That report will likely contain some choice words, and curbs to come, on the Consumer Financial Protection Bureau, an independent agency created by the Dodd-Frank Act. The CFPB has been a strong consumer champion or an overreaching blunt instrument in need of congressional oversight, depending on your politics. It certainly has had an impact. From 2011 to this Feb. 28, the agency says, it has collected $11.8 billion in restitution for more than 29 million consumers, handled more than 1.1 million complaints, and imposed about $600 million in civil penalties.

The fiduciary rule, another protection for consumers, is also under review. The rule requires financial advisers handling a client's retirement assets to act in that clients's best interests, and not, say, recommend a mutual fund or annuity because of the big commission they would earn. The White House Council of Economic Advisers under President Barack Obama estimated that retirement savers have been losing $17 billion a year as a result of conflicted advice; opponents of the fiduciary rule dispute the figure. Implementation of the rule, scheduled for April 10, was delayed by 6o days so the Secretary of Labor could examine it. Important parts of the rule will go into effect on June 9.

For the millions of private-sector workers who don't have access to employer-sponsored plans, Obama had issued rules to encourage cities and counties to create automatic Individual Retirement Account programs. On April 13, Trump issued a resolution nullifying those rules. Republican lawmakers and financial industry lobbyists oppose similar state-run auto-IRA programs, saying they are a drag on employers and evade strict rules on retirement plans.

Obama-era policy moves on student loan fees and service were rolled back. Those had added protections for student loan borrowers who were delinquent on privately held, government-backed loans and also aimed to streamline service for borrowers. There was a public outcry after Secretary of Education Betsy DeVos eliminated an Obama mandate for a grace period before lenders could assess fees on delinquent borrowers. The private student loan companies then said they wouldn't automatically charge the fee, which could be equivalent to 16 percent of the loan, if debtors made good in two months or less.

The one-page tax reform plan released on April 26 would cut the number of personal income tax rates from seven to three, at 10, 25, and 35 percent. That sounds good to a lot of taxpayers, but it isn't clear yet what the income thresholds for those rates would be.

Also appealing is a proposed doubling of the standard deduction, which would translate into more than $24,000 of a married couple's earnings going untaxed if they file jointly. For wealthier Americans, the plan would eliminate the alternative minimum tax, a parallel tax system that generally applies to taxpayers making more than $200,000 a year who claim a lot of deductions, as well as the estate tax and the Medicare surtax affecting higher-earning individuals.

Alarmingly to some, the tax proposal would end the deductibility of state and local income taxes on federal returns. The mortgage interest deduction, a longtime sacred cow, would remain, as would deductions for charitable contributions.

In the wake of a bill to repeal and replace Obamacare, pulled for lack of support in late March, a revised proposal is in the works. With high health-care costs one of the biggest concerns for workers of all ages and incomes, the outcome of that debate could wind up having the most profound impact on consumer finances.

There's one possible impact of the president's first 100 days that's a clear plus for investors. Since Inauguration Day, Jan. 20, the Standard & Poor's 500-stock index is up 5.1 percent, and the Dow Jones Industrial Average is up 5.8 percent.