► During his eight-year tenure as vice president, the Obama administration pursued numerous regulatory efforts in the financial services sector, including the Dodd-Frank Act and the Department of Labor’s fiduciary rule, which would have applied a fiduciary standard to financial advice given in retirement accounts. (The rule was later struck down in court in March 2018.)

► He proposes to raise the country’s corporate tax rate from 21% to 28% (which would still be lower than the 35% before President Trump’s 2017 tax legislation), and would raise taxes on the country’s top rate from 37% to 39.6%, according to Politico.

► He has raised $972,385 in contributions from the “Securities and Investment” industry, according to OpenSecrets.org (the most of any Democratic candidate).

► She has pledged to restore the Department of Labor’s vacated fiduciary rule, “so that brokers can’t cheat workers out of their retirement savings.”

► She sent a letter to DOL Secretary Eugene Scalia expressing concern that the Department would simply copy the SEC’s Regulation Best Interest rule when revising its own fiduciary rule. She called this a mistake, writing that the SEC’s rules “not only allow broker/dealers to give clients advice that is not in their best interest, but significantly water down the longstanding fiduciary standard that has protected the clients of investment advisors for decades.”

► She criticized the SEC’s Reg BI rule, saying at the time that the rule would “make it easier for Wall Street to cheat families out of their hard-earned savings.”

► She has raised $220,396 in contributions from the “Securities and Investment” industry, according to OpenSecrets.org.

► He criticized the appointment of Jay Clayton as SEC Chairman in a March 2017 tweet, writing that “Trump has picked a Wall Street lawyer to regulate Wall Street.”

► He expressed support for the Obama administration’s DOL fiduciary rule during his 2016 campaign for the Democratic presidential nomination.

► He proposes a capital gains tax on the top 1% of all earners, and plan to revert the corporate tax rate to 35% by reversing the Trump tax cuts.

► In response to a question during a Dec. 19, 2019 debate in Los Angeles, Buttigieg critiqued Elizabeth Warren’s wealth tax proposal, saying Americans were being offered a “false choice” between going extreme and maintaining the status quo and arguing that when politicians make promises, they must “make sure they’re promises that we can keep without the kind of taxation that economists tell us could hurt the economy.”

► Has raised $959,874 in contributions from the “Securities and Investment” industry, according to OpenSecrets.org, second only to Joseph Biden.

► She has proposed boosting the corporate tax rate to 25%, arguing it could raise approximately $400 billion in additional taxation, and suggested that people with a net worth of more than $1 million would have a tax rate of at least 30%, according to Politico.

► She expressed a desire for the SEC and DOL to create uniform fiduciary standards for brokers and advisors in a 2013 letter co-signed with nine other Democratic senators. That letter urged the DOL to let the SEC release its own fiduciary regulation before moving forward.

► She’s raised $510,998 in contributions from the “Securities and Investment” industry, according to OpenSecrets.org.

► He was placed on the short list for Treasury Secretary by the Obama administration, and was also considered for the same role in a potential Hillary Clinton presidency.

► He has raised $102,554 in contributions from the “Securities and Investment” industry, according to OpenSecrets.org, the most he’s generated from any industry.

► According to Politico, Gabbard wants to prevent companies from deferring taxes on offshore profits. While she has not released a wealth tax plan, Gabbard voted against President Trump’s 2017 tax legislation.

► She’s raised $45,668 in contributions from the “Securities and Investment” industry, according to OpenSecrets.org.

► He criticized Elizabeth Warren’s “wealth tax” proposal, saying the implementation of the tax would be problematic in an interview with Vanity Fair reporter Peter Hamby. Yang argued that some taxpayers would go as far as to divorce from their spouses in order to get below the stated income levels.

► Yang’s tax proposal includes a “Value-Added Tax” with 10% standard rate, which he would use in part to pay for his proposal to offer a Universal Basic Income of $1,000 a month to every American adult.

► He has raised $131,566 in contributions from the “Securities and Investment” industry, according to OpenSecrets.org.

► Bloomberg opposes a wealth tax, saying that it just “doesn’t work” during a campaign event, according to Fox Business.

► In his tax plan released this weekend, Bloomberg advocated raising the top income rate from 37% to 39.6%, which was the set rate prior to the 2017 tax legislation, according to Politico. He would also change the estate tax to increase the tax levied on assets after death, but his plan does not include a wealth tax. Bloomberg’s campaign estimates the new taxes will cumulatively raise around $5 trillion in revenue.

► Bloomberg is self-funding his campaign. 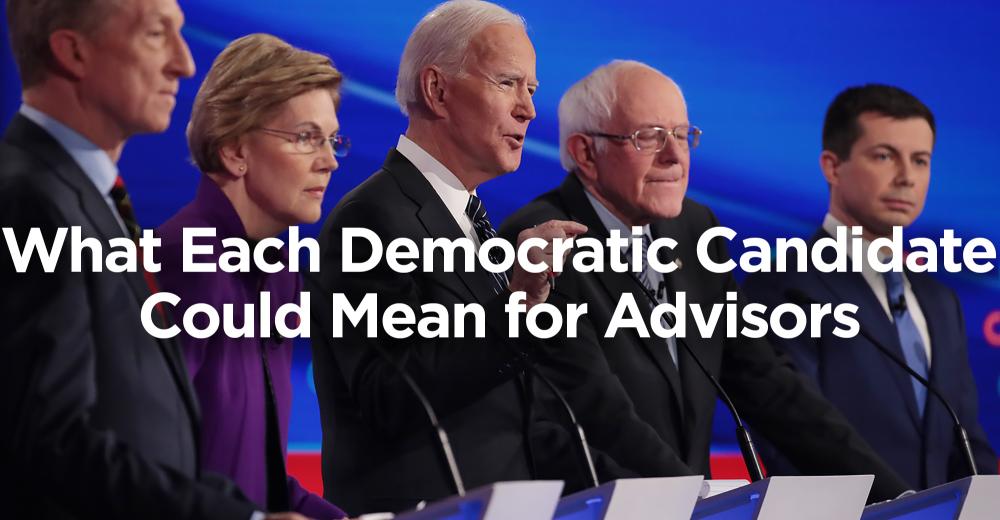 Next Up
The Shape of Things to Come
Start Slideshow ›