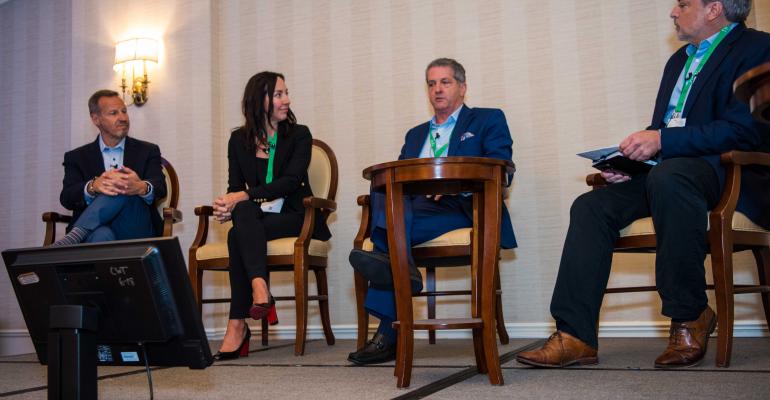 As the advisory business model continues to grow in importance, broker/dealers are increasingly becoming RIA support platforms, competing with firms that have been doing so for many years.

The old bifurcation in the wealth management industry of commission-based brokers versus fee-only registered investment advisors no longer exists, according to a panel of three firm executives at the 2021 WealthManagement.com Industry Awards on Thursday at the New York Athletic Club in Manhattan. Most advisors are now dually registered, or hybrid, the execs said, but the fee-based model is where the industry is headed.

“It’s clear, based on the amount of private equity coming into the industry and the valuations of what we’ve seen on the advisory side, that’s where you’ve got to focus your time,” said Shannon Spotswood, president of RFG Advisory, a hybrid platform for independent advisors.

Many broker/dealers recognize that trend and have built out their own support platforms for RIAs. LPL, for instance, recently unveiled its pure-play custodial service for fee-only RIAs.

“[LPL is] our most fierce competitor,” said Jeff Concepcion, CEO of Stratos Wealth Partners, a hybrid support platform that uses LPL for brokerage business. “To some degree, they’re doing a lot of things today that a year or two ago they weren’t, but we’ve been doing since inception.

“That said, my feeling is, there’s plenty to go around. We’ll win where we’re supposed to win, and where we won’t, it wasn’t meant to be.”

Spotswood said that her firm is differentiating their offering from other broker/dealers based on the culture they’ve built inside the firm and “attracting that like-minded advisor.”

RFG has gone through a massive transformation; when the firm started six years ago, 70% plus of its assets were brokerage; now 80% of assets are in advisory accounts. Spotswood said her advisors, which skew younger, are hungry for coaching, with a desire to optimize the onboarding, client experience, sequencing of the growth of this relationship and how to forge a conversation around generational wealth transfer.

Jamie Price, CEO of Advisor Group, said his firm has a large office of supervisory jurisdiction network. “I don’t see them as competition in a sense,” he said.

But his firm has been the beneficiary of massive consolidation in the independent broker/dealer space, pointing to the fact that 10 years ago, there were some 7,000 IBDs; today, the number is less than 3,000.

“I do think, over time, scale matters,” Price said. “This year we’ll invest just in incremental technology almost $20 million, not to mention another $60 million in one-time spend on other things inside the company.”

The RIA business, he adds, is still a niche business, and he does expect consolidation in that space due to advisors aging out. Advisor Group does have an RIA-only offering through its Ladenburg acquisition, and the firm is building that out. But he believes the hybrid business model provides the best outcome for the end client.

“What’s morphed today as you become more of a wealth manager, you’re using commission product not for the revenue sale, you’re using it for appropriateness inside of a portfolio,” Price said. “My brother manages my account at Morgan Stanley, and if he put my bond ladder in a fee-based account, I’d probably fire him.”

In 2016, insurance company AIG sold its Advisor Group broker/dealers to Lightyear Capital and PSP Investments. Back then, 30% of the firm’s advisors weren’t even licensed as investment advisors.

“We went on a real tear to get people licensed, and we got the number down to about 15% of our people,” Price said.

And since then, the firm has grown fee-based assets on its corporate RIA from $60 billion to $120 billion, excluding acquisitions.

Despite the growth of advisory, all three executives agreed that the hybrid model was important in that it gives advisors a choice in how they want to conduct business.