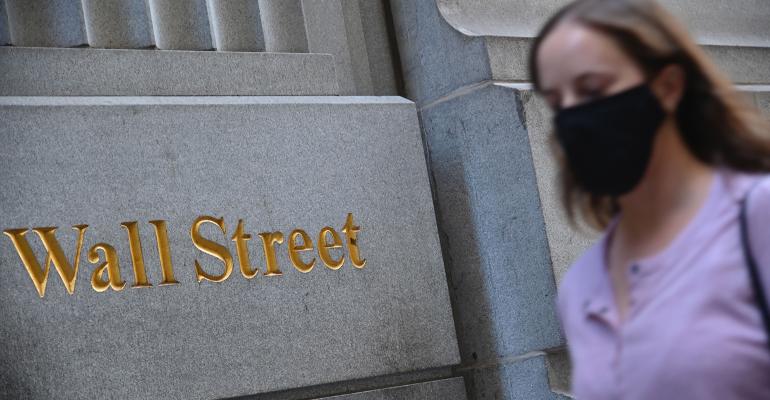 Wall Street Is Back — Just Not the Way Executives Had Hoped

Banking executives aren’t giving up on the idea of a widespread return to the office.

(Bloomberg) -- Masks are back at Citigroup, and Bank of America workers still have to keep their distance in conference rooms. At JPMorgan, investment bankers and traders can no longer blow off steam at the nearby Monkey Bar -- the tony restaurant in midtown Manhattan that closed during the pandemic.

Wall Street is back, just not the way industry executives had hoped.

For months, top bankers had been pointing to the week after Monday’s U.S. Labor Day holiday as a marker for corporate America’s long-awaited return to normal. But the delta variant upended that plan, and many large companies have delayed their comeback entirely.

Wall Street, on the other hand, is still limping ahead -- largely vaccinated and mostly masked. Banking executives aren’t giving up on the idea of a widespread return to the office even as their peers at other major corporations, from Apple Inc. to Amazon.com Inc. to Ford Motor Co., have said workers don’t have to come back until next year, and even then it won’t be every day.

“The early optimism that there would be a quick return to normalcy after the summer seemingly has been derailed by Delta,” Jefferies Financial Group Inc. Chief Executive Officer Rich Handler and President Brian Friedman wrote in a memo to staff this month. “While we greatly hope some of you will be working in the office in September with the goal of being at some reasonable critical mass in October, we will continue to closely monitor all the data and transparently share our thoughts with you as this develops.”

Fewer than 30% of financial-services workers in Manhattan have returned to the office, according to an August survey by the Partnership for New York City. For the city as a whole, employers have scaled back their expectations for a post-summer return: They now see 41% of office workers returning by the end of this month; in May that figure was higher than 60%.

Even so, legions of Citigroup Inc. and Bank of America Corp. employees will return to their desks this month, joining peers at JPMorgan Chase & Co. and Goldman Sachs Group Inc. who have been back for weeks.

Investment bankers are also getting back in the skies and out on the road, meeting with clients amid record deal flow. Traders, too, are looking to return, especially after the summer doldrums set in in recent weeks. Getting back to the trading floor could help on slower days, as water-cooler chat generates investing ideas.

There are exceptions. Software engineers and other technology workers have largely been given special dispensation to keep working from home -- a perk offered by many of the technology giants that have been trying to recruit bank staffers away in recent months.

“They are very conscious that the technology teams there want to have more flexibility because the tech sector has more flexibility right now,” Bhushan Sethi, co-leader of PwC’s global people and organization division, said on a call with journalists last month. “Firms are looking at their operating models and their workforce to say, ‘What’s the right policy? How do I manage retention risk?’”

Wall Street’s five largest banks may be sticking by their plans to open buildings to more staffers, but several of their smaller rivals have decided to balk.

Like Jefferies, Perella Weinberg Partners and Credit Suisse Group AG have pushed back their U.S. return-to-office dates. Wells Fargo & Co. did so not once but twice in recent weeks.

“We are postponing the start of our return to office until Oct. 18,” Wells Fargo Chief Operating Officer Scott Powell said in a memo to staff Sept. 1. “We continue to monitor and respond to the dynamic external environment.”

Enthusiasm about coming to the office tends to differ by age group, according to Becky Frankiewicz, president of North America for the staffing firm Manpowergroup Inc.

Many millennials are raising children and are worried about their kids contracting Covid-19, Frankiewicz said in an interview on Bloomberg Radio. Generation Z, on the other hand, is probably most excited to come back into the office, because “they’re fresh out of college, they’re looking to make their friends, it’s where they find their dating pool.”

Also enthusiastic about returning are baby boomers and members of Generation X, she said. “And think about who’s running the world’s companies right now. It is the Gen X and Boomers. So we see really varied interest about coming back into the workplace.”

--With assistance from Hannah Levitt and Katherine Doherty.