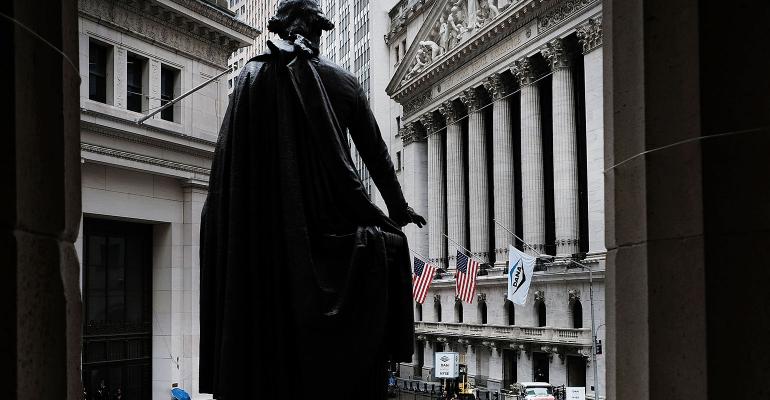 The Treasury said its plan was designed to spur lending and job growth by making regulation “more efficient” and less burdensome.

By Robert Schmidt and Elizabeth Dexheimer

(Bloomberg) --The Trump administration laid out its highly anticipated plan for overhauling bank rules, calling on the government to ease, though not eliminate, many of the strictures that were imposed on Wall Street after the financial crisis.

The changes, outlined in a report released Monday evening by the Treasury Department, urge federal agencies to re-write scores of regulations that bankers have frequently complained about in the seven years since the passage of the Dodd-Frank Act. They include adjusting the annual stress tests that assess whether lenders can endure economic downturns, loosening some trading rules and paring back the powers of the watchdog that polices consumer finance.

The Treasury said its plan was designed to spur lending and job growth by making regulation “more efficient” and less burdensome. Unlike the bill passed last week by House Republicans, the report consistently calls for most Obama-era rules to be dialed back, not scrapped.

“Properly structuring regulation of the U.S. financial system is critical to achieve the administration’s goal of sustained economic growth and to create opportunities for all Americans,” Treasury Secretary Steven Mnuchin said in a statement.

The Treasury review, which President Donald Trump requested in an executive order in February, opens a new front in the administration’s deregulatory push. While Mnuchin said the administration backs congressional efforts to roll back Dodd-Frank, the study focuses heavily on changes that can be made without legislation.

“There’s an enormous amount we can do working with the regulators,” Mnuchin said Tuesday in an interview with Fox Business Channel. “We’re very focused on what we can do by executive action.”

The House bill passed June 8 isn’t expected to go through the Senate without major revisions because of the need for Democratic support.

Democrats, who say Dodd-Frank is vital for keeping Wall Street in check after its risky trading helped bring the U.S. economy to near collapse in 2008, were quick to criticize the Treasury report as a big bank-inspired wish list.

“Too many hardworking Americans still haven’t fully recovered from the financial crisis, and Washington should be focused on protecting them by holding Wall Street accountable, not doing its bidding,” Senator Sherrod Brown, the top Democrat on the Senate Banking Committee, said in a statement.

Representatives of the banking industry generally applauded the report and said they hoped it would spur action.

“We urge regulators and Congress to take up these recommendations expeditiously, and to consider additional changes so banks can continue to play their important role in accelerating economic growth,” Rob Nichols, president of the American Bankers Association, said in a statement.

It is not clear how quickly regulators can act on many of the recommendations in the Treasury’s 150-page report.

Key positions at the Federal Reserve, the Consumer Financial Protection Bureau and the Federal Deposit Insurance Corp. are either unfilled or held by Obama appointees. Also, the byzantine process for approving regulations doesn’t lend itself to quick fixes. Rules must be written, offered for public comment for several months and then deliberated internally before a final vote.

Some of the most unpopular regulations that the report asks to re-do, such as the Volcker Rule ban on banks’ proprietary trading, were put together by five different agencies. Each one would need to sign off on revisions following those onerous steps.

Much of the report covers complex areas like how much of a capital cushion lenders should have or how to calculate the amount of leverage a bank takes on. The Treasury is also highly critical of international capital standards that the largest banks are required to follow.

On the Volcker Rule, Treasury outlined several ways that regulators and Congress should consider weakening it. Banks with less than $10 billion in assets should be exempted altogether, the report argued. It also said all lenders should have more leeway to trade and that restrictions on banks’ investing in private-equity and hedge funds should be loosened.

The review takes particular issue with the CFPB, a centerpiece of the Dodd-Frank law, calling the agency “unaccountable” with “unduly broad regulatory powers.” To rein in the bureau, the Treasury report calls for the president to be able to fire its director for any reason, not just for cause as is now the case. It also recommends the agency to be funded annually by Congress instead of being able to set its own budget.

To “curb excesses and abuses in investigations and enforcement actions,” the report said the CFPB should make a number of changes to how it probes wrongdoing, including bringing cases in federal courts rather than administratively.

On the annual stress tests now required of banks, the report says that they should instead be performed every two years. In addition, lenders that “maintain a sufficiently high level of capital” should be exempt from the exams, the Treasury said. Living wills, the plans lenders must submit to regulators to show they can be broken up without threatening the financial system, would also be required every two years instead of annually.

The report calls on Congress to boost the threshold for when a bank gets extra oversight from the Fed though no level is specified. It is currently $50 billion in assets.

The Treasury’s study criticized agencies for making overlapping requests to banks and said the “fragmented” regulatory system should be streamlined. The Financial Stability Oversight Council, a group of regulators tasked with monitoring risks to the banking system, should have more power to determine which agency writes and implements a particular rule, the Treasury said.

The Treasury review was spearheaded by Craig Phillips, a former BlackRock Inc. executive who was major fundraiser for Hillary Clinton’s presidential campaign. He is currently a senior aide to Mnuchin.

The banking report is one of several the department will release in the coming months to fulfill Trump’s executive order, which demanded a reevaluation of financial rules.