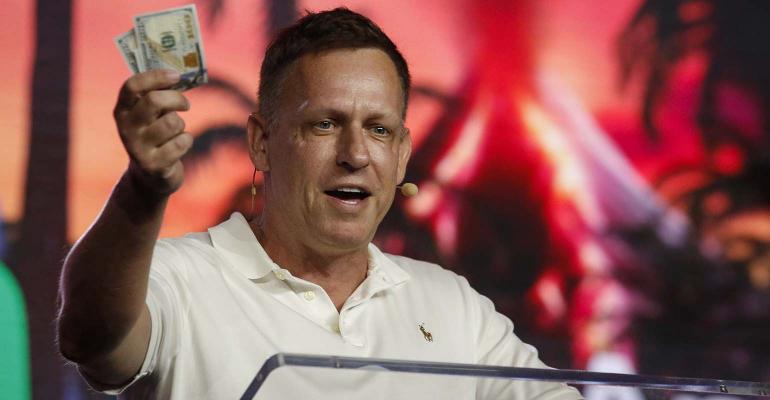 The Tricky Politics of Anti-ESG Investing

A new asset-management company backed by Peter Thiel claims to be pushing back against an “ideological cartel.” That’s a leap.

(Bloomberg Opinion) -- Recently, it may feel as if your 401K is just a mathematical distillation of every wrong decision you’ve ever made. Even worse, though, what if your investments are nothing less than the means by which a shallow and divisive agenda is foisted on millions of unsuspecting Americans by an “ideological cartel”?

That choice phrase comes from Vivek Ramaswamy, a former biotech executive, author and now cofounder of a new investment firm seeded by, among others, the billionaire Peter Thiel. Strive Asset Management seeks to take on the Big Three — BlackRock Inc., State Street Corp. and Vanguard Group Inc. — accusing them of coordinating a campaign to push political objectives that are at odds with their clients’ best interests. In essence, BlackRock CEO Larry Fink et al. decide that they want to prioritize tackling climate change or systemic racism or whatnot and then use the trillions of passive dollars they invest to force companies to prioritize that, too. Strive will do the opposite, pushing instead “excellence capitalism” — that is, nudging companies to ditch the political stuff and focus on delivering good products and services.

Ramaswamy laid out his anti-ESG thesis in a book published last year titled “Woke, Inc.” As much as it contains useful observations, its thesis is overwrought. It may nonetheless be useful for the ESG — environmental, social and governance — movement to grapple with it.

Ramaswamy’s core argument is a warning about the growing power of passive money managers. This has merit. The Big Three own, on their clients’ behalf, about one-fifth of each S&P 500 member, on average, with potentially negative implications for governance and competition. There is already lively debate and a body of academic literature about this.

Still, it remains a leap to conclude that there now exists a cartel — a loaded term — that effectively forces certain political stances on US companies and Americans in general. It is far from clear that corporations set the pace on social issues rather than take their cues from below. For example, plenty of people — indeed, a majority in the US — are concerned about climate change, and that didn’t require the imprimatur of any corporate executive.

Indeed, while Strive cites a survey by Brunswick Group that it says demonstrates that “most American consumers, voters and shareholders overwhelmingly agree” with its approach, the conclusions of that survey are more nuanced. It does show that only 36% of respondents “unequivocally” think companies should speak out on social issues. However, another 44% think companies should do so but only if the issues are directly related to their core business. Only 20% give a blanket “no.” The takeaway is not that companies should avoid taking any positions on such issues but that they should choose their battles carefully and, crucially, pay more than lip service if they do speak out.

The Brunswick survey does reinforce another of Ramaswamy’s criticisms, namely corporate hypocrisy. In his book, he does a good job recounting examples of companies posturing about this or that, often to distract from a more mercenary or scandalous story. Undoubtedly correct, this is hardly a revelation. About 60% of survey respondents said companies speak out on social issues in order to look better to consumers. Such common skepticism rather undercuts the idea that top-down social conditioning via fiduciary fiat and corporate campaigning is actually effective.

Companies clearly can get out over their skis. Walt Disney Co., for example, in its spat with Florida’s governor, looks to have been bounced into taking a stand before it was sure of its ground. But this is a gray area. It might not be obvious why, say, a software developer would want to take a stand on voting access or transgender rights. But one rationale may be considerations for the morale of younger workers amid a high quits rate. Would that be “wokeness,” managing the risks around the “S” in ESG, or just a way to retain staff without offering raises? Even hypocrisy can have useful outcomes.

Strive also cites Exxon Mobil Corp. as an example. Last year, Exxon famously lost a proxy battle to an upstart ESG fund, Engine No. 1 LLC. Ramaswamy says he would have voted against the three dissident directors elected to the board and that the subsequent oil-price spike shows that Exxon would have been better off ignoring the green stuff and drilling more wells. Yet, as Engine No. 1’s own campaign showed, the environmental part was inextricably linked with the governance part. Exxon’s lagging financial results (and stock) were plausibly blamed on financial indiscipline under a board that looked underqualified to oversee a traditional oil major, let alone one facing the novel challenges of climate change. The relative restraint on drilling shown by Exxon, among others, in the face of triple-digit oil prices is precisely what has persuaded ambivalent investors to buy back into the sector.

The Exxon example gets at possibly the biggest problem with Strive’s approach — though also with the investment philosophy that Strive sets itself against. Google articles about Strive and you will find terms like “ESG,” “SRI” — socially responsible investing — and stakeholder capitalism used interchangeably. Similarly, Ramaswamy’s book uses the catch-all term “woke”:

Basically, being woke means obsessing about race, gender, and sexual orientation. Maybe climate change too. That’s the best definition I can give.

If you say so. Dismissing climate change as just another activist obsession speaks to the logical disconnect of exhorting Exxon to focus on delivering a high-quality product without acknowledging that said product carries an inherent, climate-related flaw that requires a strategic response. One person’s liberal hobby horse is another’s systemic risk.

The blurring of lines between ESG, SRI and all the rest of it has done a disservice to sustainable investing, in part by creating space for blanket dismissal. As my colleague Nir Kaissar has written, some of the blame for this lies with seeming champions such as Fink himself, who mixes calls for companies to adopt pragmatic ESG risk management with very different SRI proposals to exit investments in sectors deemed unsustainable. This sows confusion and invites derision.

In that sense, Strive’s broadside offers a useful wake-up call for ESG to hone its messaging and methodology. ESG’s great strength is its use of objective criteria rather than subjective beliefs to reduce financial risk or enhance financial performance. It also allows for more nuance; one could, for example, invest ESG-style in a coal-heavy utility today in order to help along (and benefit from) its future renewables projects.

The fuzziness of the investment movement that anti-woke asset management sets itself against is a doubled-edged sword. Most passive investors prize the low costs that come with scale, and “excellence capitalism” seems too vague a pitch to disrupt that. Nevertheless, Strive’s timing is impeccable, effectively taking the opposite side of what has become a crowded trade.

That timing also makes it suspect. Strive launches amid a gathering Republican campaign against companies taking positions that oppose the party line on wedge issues. The day after Strive’s announcement, former Vice President Mike Pence gave a speech in Texas attacking ESG and socially minded investing, making a wild claim that Exxon’s new directors were “now working to undermine the company from the inside.” As much as Strive touts itself as “depoliticizing corporate America,” I’m afraid you don’t get to do that credibly while also boasting about seed money from Thiel.

More from other writers at Bloomberg Opinion:

To contact the author of this story:
Liam Denning at ldenning1@bloomberg.net