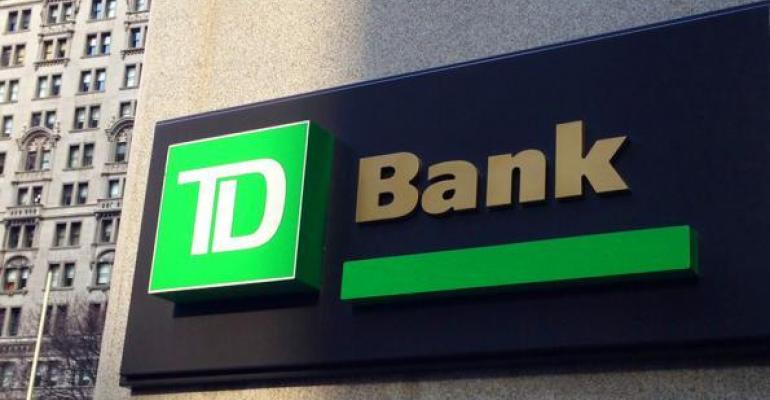 TD Has Quickly Become a Top 10 U.S. Bank and It's Not Done Yet

CEO Greg Braca: "We’ve got loads of room to grow."

(Bloomberg) --Toronto-Dominion Bank’s new U.S. head isn’t being critical when he describes the lender as “sub-scale” in small business and corporate lending, and “underweight” in wealth management. He just thinks there’s market share to be had.

Braca, 53, who took over the top job in June following Mike Pedersen’s departure, outlined his plan for the bank’s “next evolution” during an interview last week at Bloomberg’s New York headquarters, including ambitions for its Maine-to-Florida branch network to be a “market share taker.” He said he’s not looking to reinvent the lender, but expand its “foundations and underpinnings” to become a more significant competitor to bigger rivals like Citigroup Inc. and Bank of America Corp.

The Canadian-owned lender has expanded through acquisitions to become the eighth-biggest U.S. retail bank by assets. Toronto-Dominion spent about $17 billion building its U.S. branch network from 2005 to 2010, buying Portland, Maine-based Banknorth Group Inc. and New Jersey’s Commerce Bancorp Inc., as well as lenders in the Carolinas and Florida. TD also has added on credit-card portfolios, an auto financing company and a U.S. money manager.

Braca, who joined Commerce Bancorp in 2002 and stayed through the transition, described his strategy as “basic, old-fashioned sort of stuff, overlaid onto digital capabilities." It includes investments in technology, opening more branches in New York, Philadelphia, Washington and throughout Florida, and building on what he calls a “nascent” wealth-management business seeded by the 2013 takeover of New York-based Epoch Holding Corp.

“We have a fantastic opportunity around wealth,” Braca said. “We’ve brought in a lot of people, we’ve rebuilt platforms and we’ve built product capabilities. We are finally now dressed to play."

“We very much want to be a focus for our customers and that includes lending to high-net-worth or mass-affluent individuals," he said. “We think there’s a compelling way we can go to market there.”

Given the relatively small size of its wealth-management business, the lender is open to new technology without the fear of it “disrupting the existing capabilities or revenue streams,” Braca said. He sees a place for robo-advising, the low-fee automated investing platform already being adopted by big banks including Morgan Stanley and Bank of America.

“We would view it as a tool rather than some overarching strategy about how you face off against the market," he said. “As we think through this, we don’t have this inherent large book of business that we’re disrupting.”

Braca said he expects future growth will be fueled internally, though he didn’t rule out more acquisitions.

“Never say never," Braca said. “You want to look and be aware of what’s going on in the market, you want to be opportunistic. But clearly, we now have the size and scale in the U.S. where we don’t have to do a deal."

His comments echo those of Toronto-Dominion Bank’s CEO Bharat Masrani, who said he’d rely on internal growth over acquisitions to expand in the U.S. when he took over as head of the parent company about three years ago. Still, Toronto-Dominion has continued with some deals, including working with TD Ameritrade on this year’s $4 billion takeover of Scottrade Financial Services Inc., and earlier buying credit-card portfolios of Target Corp. and Nordstrom Inc.

The Toronto-based parent company gets about a third of its annual profit from U.S. retail banking, and has more branches in the country (1,260) than it does in Canada (1,138).

As it shifts toward digital banking, TD Bank plans to differentiate itself by highlighting the same “convenience” theme its brick-and-mortar locations are known for, Braca said. In its early days, TD Bank relied on a " retail-tainment" strategy revolving around coin-counting machines, piggy banks for kids and treats for customers’ pets.

“We used to, 15 years ago, talk about dog biscuits in stores, and that was a convenience point and people loved it," Braca said. “What’s the digital version of that biscuit?”