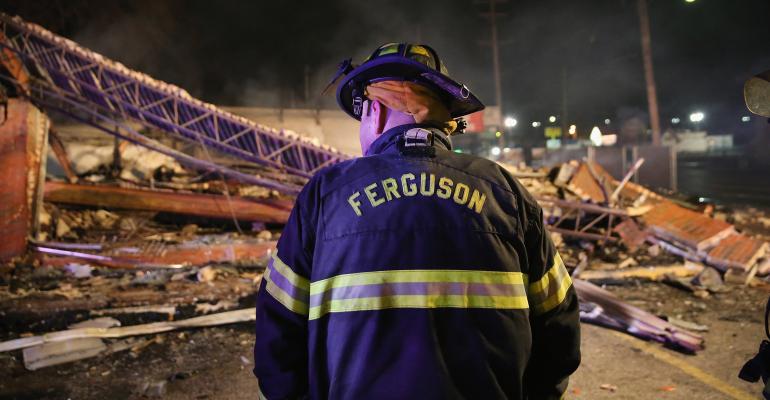 <p>Financial firms near Ferguson, Mo., are working remotely following a night of rioting stemming from the grand jury&#39;s decision not to indict police officer Darren Wilson for the shooting of Michael Brown.</p>
News>Industry

Violence erupted in the streets of Ferguson, Mo., after a grand jury decided not to indict the police officer involved in the shooting of Michael Brown, causing several St. Louis financial services firms to work remotely on Tuesday.

The decision sparked protesting among the hundreds who had gathered outside the Ferguson Police Department. At an early morning news conference the St. Louis County police chief, Jon Belmar, reported at least a dozen buildings had been set on fire, several businesses were looted and both police and civilian cars were set on fire.

At many of the area firms, which were reviewing contingency plans and limiting in-office client visits in the days leading up to the decision, employees were safe and sound and carrying on with businesses as usual, even if that meant working remotely.

At Buckingham Asset Management, which is headquartered just blocks from the county courthouse and police station, spokeswoman Meredith Boggess said employees continued to work remotely today after they were sent home on Monday as a precautionary measure following the news a grand jury decision would be coming down. “We're fully functional remotely today, as a demonstration was planned in Clayton where we are headquartered for this morning,” she added.

Moneta Group Investment Advisors also has its employees work remotely on Tuesday, according to spokeswoman Emily Barlean. “Several of Clayton’s roads are blocked off this morning and since we all pretty much have the ability to work from home, we decided that it was in everyone’s best interest to do that today,” she said.

Representatives for Benjamin F. Edwards & Co., Scottrade and Stifel Financial did not immediately respond to requests for comment on Tuesday, but there were no reports of damage to their facilities.