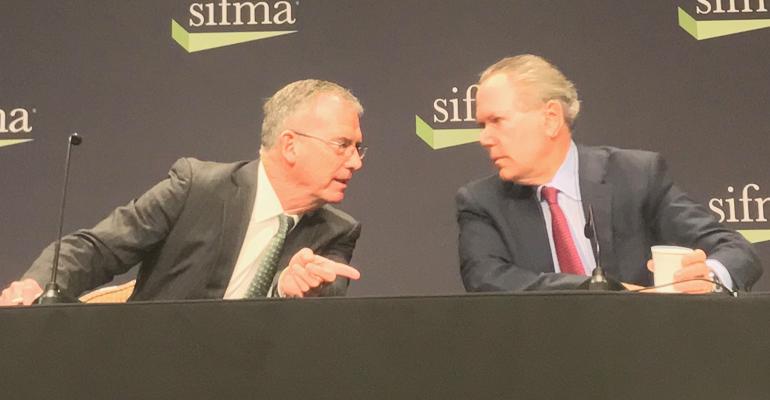 It looks like the DOL fiduciary rule will be brought back to life, but it will likely look very different.

Even though we’re less than a month away from 2020, Securities Industry and Financial Markets Association President and CEO Kenneth Bentsen said he had been told the U.S. Department of Labor would put out a proposal of their revised fiduciary rule before the end of the year.

The department is expected to release a proposal that will align with the Securities and Exchange Commission’s Regulation Best Interest rule, after the DOL Obama-era rule was vacated in federal court in 2018.

“We expect the DOL to put out a proposal that will address how ERISA conforms, or co-habitates with Reg BI. We’ve been told that will be out before the end of the year,” Bentsen said. “That will be a major rulemaking.”

The comments came during a “state of the industry” media briefing held at SIFMA’s Manhattan offices Thursday morning. Bentsen was joined by SIFMA 2020 Chair Joseph Sweeney, president of advice and wealth management, products and service delivery at Ameriprise. The conversation touched on a variety of issues, including market trends and outlooks for the coming year, the impact of U.S./China trade tensions, and regulation, including Reg BI and several states’ efforts to pursue their own fiduciary standards.

In March 2018, the Fifth Circuit Court of Appeals vacated the DOL’s fiduciary rule, asserting the department lacked the statutory authority to pass such a rule. (SIFMA was one of the plaintiffs in the court challenge.) Under the Trump administration, the DOL began work on a revised rule; at a House of Representatives committee meeting in May, then Labor Secretary Alex Acosta revealed the agency would collaborate with the SEC to ensure its revised rule appropriately aligned with the commission's rule, which was approved in June and will be implemented next year.

Acosta later resigned from Trump’s cabinet after he was scrutinized for his involvement in the Jeffrey Epstein scandal; in July, President Trump announced Eugene Scalia’s nomination for the position of labor secretary. Scalia, the son of the late Supreme Court Justice Antonin Scalia and a solicitor of labor under the George W. Bush administration, was confirmed by the Senate in September.

Eugene served as a counsel for plaintiffs in the successful suit against the DOL’s original fiduciary rule, leading critics to argue his involvement in crafting the DOL’s revised rule could create a conflict of interest. In late October, government ethics attorneys cleared him to work on the rule, with DOL Solicitor Kate O’Scannlain saying that he did not need to recuse himself because “the new rulemaking is not a ‘particular matter involving specific parties’ and litigation related to a prior rule which the secretary handled while in private practice has ended,” according to a statement included in a Wall Street Journal report.

According to the DOL’s fall regulatory agenda, the rule is currently in the “Proposed Rule stage,” although it has not been submitted to the White House’s Office of Management and Budget for approval. It will presumably go through a public comment period before the rule can be finalized.

When asked about states pursuing their own fiduciary rules, Bentsen said they should slow the process and consider how Reg BI will impact the industry. He warned that a “patchwork” of rules could be cumbersome to brokers working within multiple states.

“Notwithstanding the appropriate role states have in regulating commerce within their boundaries, Congress has long deemed that the capital markets are federal markets, in almost every case, so we have a national market system,” Bentsen said. “What we suggest is you need to take a step back and look at Reg BI, and not let this discussion be colored by the fact that people might think that somehow Reg BI is lacking, because it’s not.”