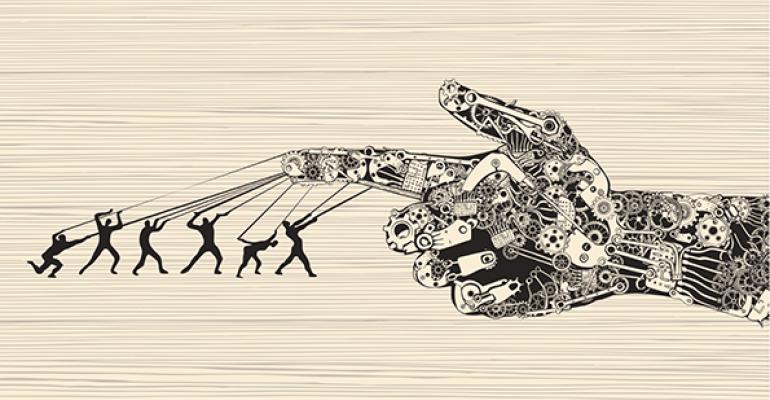 “What you really need are computer geniuses who failed as algorithmic traders and are willing to switch sides,” said Brad Bennett, who was head of enforcement at the Financial Industry Regulatory Authority until earlier this year.

Traders used to leave paper trails when they broke the law -- emails revealing that they had inside information about a company’s earnings, instant messages laying out a conspiracy to manipulate prices or phone recordings discussing an illegal hot tip.

Now government watchdogs have to figure out how to look under the hood of machines running lightening-fast algorithms or machine-learning software. The danger is that cheaters will be able to hide abuses or will accidentally turn a software glitch into a market meltdown. And there are few legal precedents in which regulators have used computer code as evidence to prosecute misconduct.

To keep up, agencies such as the Securities and Exchange Commission and the Commodity Futures Trading Commission might have to rethink whom they hire. They could take a page from hedge funds and investment banks that have been turning to people who know how to write computer code, not just traders with MBAs.

“What you really need are computer geniuses who failed as algorithmic traders and are willing to switch sides,” said Brad Bennett, who was head of enforcement at the Financial Industry Regulatory Authority until earlier this year. “You have to be able to deconstruct the code.”

Finra, which is funded by the financial industry, acts as a front-line regulator for brokers. It goes through reams of trading data to try to spot suspicious buying and selling, and typically passes what it finds on to the SEC.

A particular concern among officials at the SEC and CFTC: As automated trading increasingly takes over, it may become more likely that market problems will spread rapidly. A mistaken order -- or even just an outsized one -- gets picked up by computers that rely on artificial intelligence to read data signals. In less than the blink of an eye, there’s a cascading effect across markets.

Automated trading has already been blamed for contributing to everything from the May 2010 flash crash for U.S. stocks to volatility during the European sovereign debt crisis. Still, when regulators have sought to boost oversight, they’ve faced intense pushback from industry.

In late 2015, the CFTC proposed a rule that would have forced algorithmic traders’ to turn over their source code confidentially. The regulator said it wanted to be able to inspect and review algorithms to better assess what role they play in market malfunctions.

But trading firms balked, saying they were worried that the secret sauce they rely on to make money would be compromised through a computer hack or another kind of breach. After aggressive lobbying and a bitter back-and-forth, former CFTC Chairman Timothy Massad effectively punted on the issue.

A similar narrative has played out at the SEC. In a 2014 speech, then Chair Mary Jo White said the agency wanted to crack down on aggressive high-frequency trading that can exacerbate market issues during times of stress. She added that she had directed SEC staff to work on a regulation.

Last year, White conceded that coming up with a fix had proven difficult. Markets are now incredibly complex and trading is fragmented across multiple, electronic venues. The SEC was concerned about interfering “with practices that benefit investors and market efficiency,” she said in September 2016.

Even when projects do get off the ground they are still met with opposition. A massive trade database is being built to help regulators detect manipulation and more quickly figure out the cause of trading disruptions. But cybersecurity concerns -- made worse by the SEC’s September announcement that its massive repository of company filings had been hacked -- have prompted stock exchanges to question the system, know as the Consolidated Audit Trail.

Regulators’ fights with industry underscore a bigger challenge of government agencies with limited resources trying to keep tabs on financial giants, said Aitan Goelman, a former CFTC enforcement chief. The SEC has an annual budget of about $1.6 billion, while the CFTC’s is $250 million.

“There’s no question that the CFTC, in particular, is critically underfunded,” said Goelman, who now heads Zuckerman Spaeder LLP’s securities and commodities litigation practice. That “makes it very hard for the agency to carry out its mission in its diverse markets, many of which are changing at breakneck speed.”

At the same time, technology is helping financial watchdogs carry out their missions. The SEC has been building algorithms in recent years to try to detect anomalies in trading of opaque bonds tied to mortgages, auto loans and other kinds of debt. SEC officials have said the algorithms have helped the agency identify billions of dollars of problematic trades.

And even Wall Street’s growing reliance on technology isn’t all bad for regulators. Goldman Sachs Group Inc., for example, has been promoting coders within its trading operations with some approval from authorities. Regulators like that trading supervisors understand the mechanics of their systems, in case something goes awry.

History shows that when that happens, humans need to get involved. The Federal Reserve, for example, pushed investment banks after 1987’s Black Monday crash, and again after 1998’s collapse of Long-Term Capital Management, to provide financing that helped to right spiraling markets. In both cases, the intervention worked. But such efforts may be more difficult if large investors, such as exchange-traded funds, were to keep selling selling robotically because of pre-programmed rules.