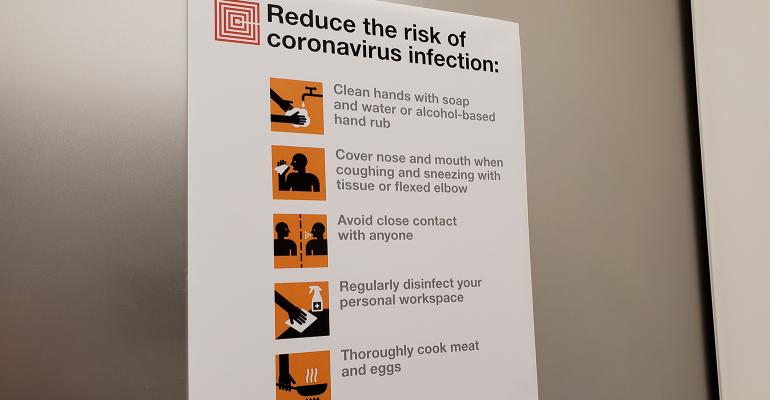 RIAs Rethink Telework and Travel in Face of Virus' Spread

Advisors are limiting travel, telling employees to work from home and cancelling events, all while balancing the need to be open and responsive to clients.

Like many RIAs based in New York City, Andrew Altfest, principal advisor at Altfest Personal Wealth Management, can recall the tumult after Hurricane Sandy made landfall on the East Coast in 2012, shutting down businesses across the area. Firms needed to improvise to ensure advisor/client relationships remained stable, even when it was impossible for advisors and employees to remain on-site.

Now, faced with the threat of the further spread of the coronavirus, Altfest said he saw similarities—as well as some crucial differences—between the two incidents and how his firm responded.

“I think you have to be prepared that this could be a much longer situation than Sandy. Sandy was relatively short; this is something that could be prolonged, and we don’t know yet,” he said. “Thankfully, tech improves all the time, and the tech we have now is even more robust than when Sandy happened. We feel the ability to work remotely, with clients and internally, is very strong right now.”

Advisors across the country are weighing these same questions, gauging the benefits and drawbacks of teleworking, limiting travel to see clients, partners and colleagues, and looking to how they can keep the firms not just running but also open and responsive to clients who may be anxious about the virus’ effect on the markets and their financial plans. The need becomes more acute particularly as uncertainty remains over how pernicious the spread of the virus will be.

Michael Policar, an advisor for HighTower Securities based in Bellevue, Wash. (the state that has seen the highest death count in the country thus far), said corporate headquarters had advised advisors to let their staff work from home. Policar said all firms need to put in place steps to let staff work remotely, while keeping crucial and sensitive business processes in place.

“Last week, one of my operations staff had to spend a couple of hours on the phone with our tech staff to make sure that everything was set up,” he said. “(HighTower is) telling people to remain cautious and remain vigilant.”

At Altfest’s firm, executives canceled two client seminars last week that focused on female investors and health care, but are offering individuals who were slated to attend those events a remote feed of the presentation instead.

“We had the systems and wanted to make sure people were comfortable working with the systems,” he said. “We’ve invested in the systems that allow us to communicate out of the office and not have down time through work.”

Many firms Wealthmanagement.com spoke to over Monday and Tuesday, including large RIAs like Mercer Advisors, as well as smaller firms, were not ending in-person client meetings entirely, with many preferring to leave it up to the client’s comfort level.

However, Kyle Mast, the founder of Clarity Financial, who operates out of Portland, Ore., and has numerous clients throughout the state, said while it’s not required, remote meetings may be beneficial for everyone, particularly for older clients who may be at higher risk.

“A lot of my clients are in the risk-age bracket, and if I’m taking care of their financial plans, as a fiduciary, it’s about their life, too. If it makes them comfortable, I’m fine doing the meetings either way at this point,” he said. “I want to make sure I’m not giving them something to be afraid of more than they should be.”

While most firms are not banning in-person client meetings, some said they were reconsidering travel for conferences or to meet with service providers.

Jim Ayres, a CIO with Pacific Portfolio in Seattle, said his firm could safely delay meetings with service providers for a number of months if there was not a pressing need.

Meanwhile, Eric Walters, a managing partner and founder of SilverCrest Wealth Planning in Greenwood Village, Colo., said his team was not planning to attend any industry conferences that were out of town but were putting on hold plans for their own scheduled client events in April.

National brokerage firms too were putting limits on advisors’ travel. A spokesperson for Merrill Lynch said the firm was approving only “client-essential” trips and looking at events on a case-by-case basis. Work-from-home policies are being approved as needed, the spokesperson said.

Morgan Stanley too said it’s approving only critical travel for employees, including advisors, and is requiring employees who have travelled over the past two weeks to countries with high infection rates to avoid entering a Morgan Stanley office for 14 days after the trip. UBS also requires employees to self-quarantine for two weeks if they have recently visited a country with a coronavirus outbreak.

Smaller firms can take more decisive action. Jim Dickson, CEO of Sanctuary Wealth in Indianapolis, told WealthManagement.com that he sent out a memo to all staff on Monday explaining they could work from home as desired. “Our business plan, with our technology, was always about being able to work remotely,” he said. “That’s part of the benefit of being independent. We want them to be conservative, but we reminded them that there’s been a lot of these [virus outbreaks] over time” and not to needlessly worry, Dickson said.

Some conferences organizers were beating advisors to the punch by canceling. Maya Tussing, a partner with the Bay Area-based Fairlight Advisors, said the ChIPs Network's 2020 Next Gen Summit, which connects female leaders in tech, law and policy (where Tussing was scheduled to speak), and the Women’s Leadership Conference sponsored by San Mateo County (where Tussing was to moderate a panel on grassroots community engagement) had been canceled due to concerns over the virus.

Tussing also worried about being able to communicate with her custodians, which include Schwab and TD Ameritrade Institutional; with teleworking on the rise at the big firms, she hoped small RIAs like hers would not be squeezed out and still be able to access assistance for client operations and service questions.

Nonetheless, Tussing said there were benefits to being a smaller firm when facing a challenge like the coronavirus.

She previously operated a physical office out of San Francisco, but it was the firm’s greatest expense; now, Tussing and her partner work from their homes, so transitioning into teleworking for health reasons would be seamless, if necessary.

Rachael Hodyno, the client services coordinator at Scottsdale Wealth Planning in Scottsdale, Ariz., echoed this point, saying the firm’s small size meant everyone on the team could work from home without much disruption.

“Because things have been so great over the past couple of years, I’d assume that firms like ours that are smaller and more agile have those plans in place,” she said. “I feel like that’s actually working to our benefit.”

Mast said he had built Clarity Financial to be completely virtual, so a move toward remote working would do nothing to change how the business operated from a process standpoint.

“I do know one of the general reasons I started my own RIA was to pivot quickly to serve clients the best I can, whether that’s new tech or something like this,” he said, referring to the coronavirus. “I can change quickly, who we meet and how we meet, and I don’t have to run it by compliance; I can do what’s best for the clients.”

With reporting by Asia Martin and Erick Bergquist.