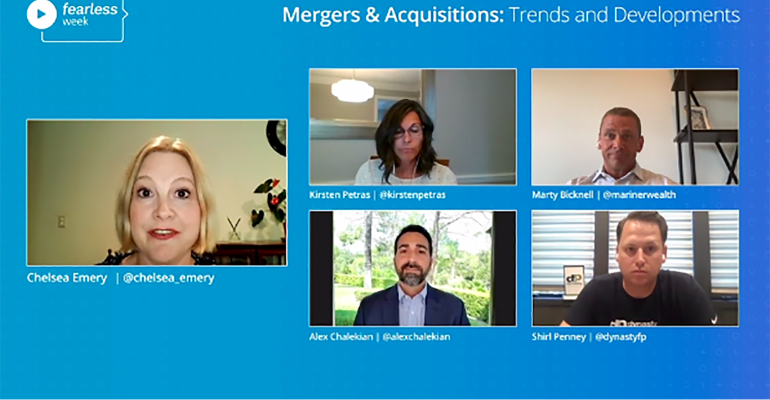 The RIA space will likely see a resurgence in M&A activity in the second half of this year, while 2021 could be the biggest year yet, said M&A players, speaking at Riskalyze's Fearless Week virtual conference.

Mergers and acquisitions in the registered investment advisor space will likely pick up in the second half of the year, while next year could set a new record for deals, according to RIA acquirers and M&A experts, speaking at Riskalyze’s Fearless Week 2020 virtual conference.

“Lots of deals paused in March, but not many were totally abandoned,” said Marty Bicknell, president and CEO of Mariner Wealth Advisors. “We’re starting to see a resurgence of most of the conversations we were a part of. The back half of this year should be equally strong as the back half of last year, and 2021 could set a new record.”

“This is a bold prediction, but 2021 could be the biggest year ever,” said Shirl Penney, CEO and founder of Dynasty Financial Partners. “The end of March/early April was like the advisor Super Bowl—they wanted to be close to their clients,” he said, but lately advisors looking to sell have “begun to stick their heads back up.”

Kirsten Petras, executive director of sales for Indianapolis-based Oak Street Funding, which provides financing for RIA deals, said the company did not see a slowdown in demand for loans for mergers in the second quarter. “Largely, deals were docked and ready to go and just needed execution … and some triage work.”

The COVID-19 travails of advisors have only encouraged more to pursue sales in the second half, she added. “Our team speaks to hundreds of folks on a weekly basis and those with succession issues have been talking for years about it, but we believe starting in the fourth quarter, succession activity” will drive tremendous M&A “into play, which might stretch itself out for years to come,” she said.

“There is a deeper sense of a desire to close. We will also see a strong first quarter of 2021. Everything is going on now,” she added.

Alex Chalekian, the founder and CEO of Lake Avenue Financial and head of Integrated Partners’ acquisitions department, said the conversations he started having with prospective targets last year, which were tabled early in 2020, are starting to heat up again, and that his firm is placing a premium on firms that can work on a 100% virtual basis.

The first half of this year saw a total 64 RIA M&A deals, matching the first half of 2019, according to DeVoe & Company’s second quarter RIA Deal Book report, which was released in July.

Founder and CEO David DeVoe believes there is some pent-up demand for deals, which could manifest itself down the line.

“Each month of compressed RIA M&A activity puts additional pressure on future transaction volume,” DeVoe’s report said. “This is an industry with nearly half the owners over 60 and only a third with a written succession plan. The volume of sales was already projected to steadily grow for the next five to seven years.”