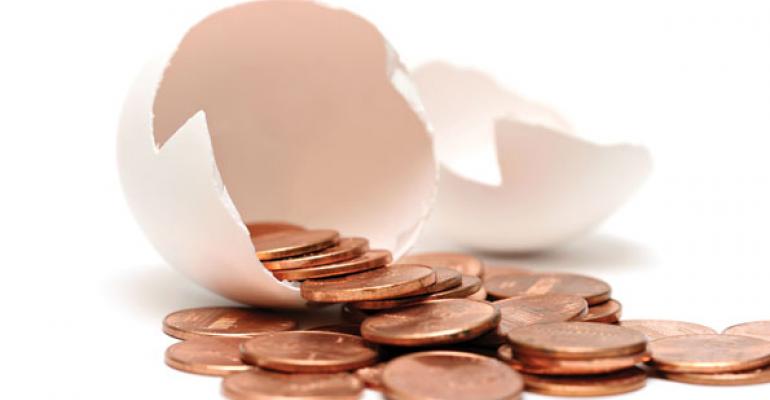 Rep.'s Annual Compensation Report 2012: The Chink in the Ka-Ching

Small household accounts have always been the bane of brokerages' existence, and advisors who work with such clients do so at the peril of their own compensation.

Size matters. Ask any advisor when the subject of compensation on household accounts comes around. Bigger isn’t just better, it’s become mandatory, at least as far as some of the wirehouses are concerned. Merrill Lynch inaugurated a minimum size of $250,000 on new household accounts starting at the beginning of this year, up from $100,000. (More a little later concerning some of the nuances of the new rules.) It means that advisors who open smaller accounts often won’t collect a nickel on them.

It’s the sort of thing that fuels the legendary grumbling that advisors indulge in over how they’re being paid for their work. As it happens, this year’s annual Rep. survey of industry compensation found that most of the advisors who were polled actually are pretty happy with what they’re getting paid overall. More than 55 percent said their total compensation in 2011 grew by 10 percent or more. More than 56 percent expect their 2012 compensation will grow by 10 percent or greater. Asked if they were satisfied with their current compensation plan, 56 percent either agreed or strongly agreed.

Yet the penalties that are asessed to discourage certain business practices are being felt in the trenches. More than a third of brokers surveyed from the wirehouse and national brokerage firms said their companies penalized them for client accounts with low asset levels. Minimum account levels are among the oldest penalties in the compensation game—and the most troubling for advisors trying to break into the industry. “Not paying on accounts below a certain amount, that is so difficult for the broker,” says Rich Schwarzkopf, a New York City recruiter. “The first time you open an account, you may only get $25,000 or $50,000. That’s why the average age of the broker is getting old. The young ones just burn out.”

Andy Tasnady of Tasnady & Associates, a compensation consultancy in Port Washington, N.Y., that specializes in the financial advisory industry, says account minimums have been around at least 15 years. Part of the rationale is efficiency; successful brokers cannot have too many relationships, he says. “When you want to provide advice, you can’t be good at it with 1,000 clients,” Tasnady said. “If you’re only going to have 200 or 300 clients, they may as well be large ones.” 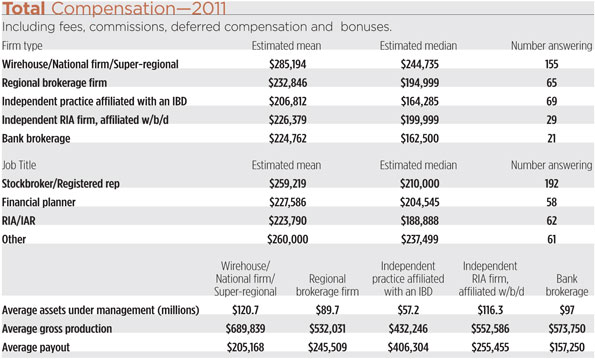 But some firms will make allowances. Merrill Lynch’s new policy, for example, doesn’t apply to existing accounts, although it applies to all brokers, including trainees who are trying to build books of business. Morgan Stanley Smith Barney has reduced payouts on accounts below $100,000, but FAs may link accounts within the same household to exceed the threshold and eliminate the lower payout. (Spokesmen at UBS and Wells Fargo Advisors could not be reached to comment on minimum account payouts.) Firms are slowly raising minimums, Tasnady says, but they don’t tend to make big changes all at once. “Most of the compensation is evolutionary rather than revolutionary from year to year,” he says.

Danny Sarch, a recruiter at Leitner Sarch Consultants Ltd. in White Plains, N.Y., agrees. “There haven’t been dramatic changes in a long time,” Sarch says. “They tinker typically every fall with the payouts somewhat. That said, as firms look to take out costs, the one cost they’ve always struggled with is, how do we get away with paying advisors less? 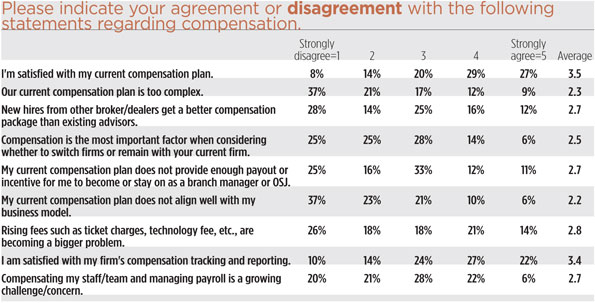 “The answer is, you can’t, as long as your competition isn’t,” he says. “If you change it too dramatically and your competition doesn’t, you’re going to drive your advisors to go somewhere else.”

For some advisors, the issue of account minimums offends their sense of independence and interferes with how they’d like to do business. In April, Leslie Ferrone, a 27-year industry veteran in Oak Brook, Ill., left Merrill Lynch, where she had $40 million in assets under management and about 50 clients. She started her own RIA with Concert Wealth Management. Production was an issue for her

at Merrill, where minimum revenue expectations increase with tenure at the firm (she joined in 1995); she says her payout was cut from 38 percent to 25 percent two to three years ago. While compensation wasn’t the primary driver for her decision—“I was there for three years at a 25 percent payout. Clearly it wasn’t about the money”—she bridles at the thought that her employer would dictate the minimum size of an investor with whom she wanted to work.

“It’s wicked uncomfortable,” Ferrone says. “What if it’s a young couple and they’ve got a nice chunk of money from their wedding, and they want to invest $75,000 and every year they want to add to that?”  The size of the account is less important than other factors, Ferrone says. She would prefer 10 clients with $100,000 each to invest and who are easy to deal with, than one client with $1 million who is difficult.

“It’s whether or not I like you. If I can’t get along with you, all the money in the world is not going to help me because you’re going to make my business goofy,” she says. “Me, I’m going to take the 10 super easy people over the idiot all day long…It should still be my decision. Here’s the bottom line—don’t tell me what to do. It’s my business.”

For others at Merrill, the new minimum account rule is no big deal. One broker who joined Merrill recently and has about $15 million in AUM recently opened an account for $175,000 for two attorneys; he is resigned to seeing no payout on the new business. He says he’s taking the long view.

“I’ll make that decision. For the first year, I don’t get paid,” he says. “It’s a gamble on my part. We’ve developed a nice rapport. There’s likely to be some referrals down the line. If this were an older couple with $175,000 and they’re retiring, I probably wouldn’t take that.” To manage the investments in a way that ensures the assets are properly correlated for risk, he figures he needs at least $500,000 for an account; clients with less than that, like the lawyers, understand that their accounts are managed at a level that’s less optimal, he says.

Merrill should push the account minimum above $250,000, he adds. Low accounts require more time to service.

“There is some very good logic behind it. It makes perfect sense to me,” he says. “When you have $2 or $3 million of somebody’s money, they are much more at ease than somebody with $100,000. If you lose 10 percent of $100,000, that’s a sizable chunk of their net worth. If you lose 10 percent of a $3 million account, they still have $2.7 million left. They’re not about to be as nervous in the market and require as much upkeep.

“Time is the only asset we really have. We as brokers for Merrill Lynch should be going after much higher net worth individuals than we really are,” he says. But would he take a $50,000 referral from his best client in order to keep that client happy?