Today: On January 20, 2017, Jay Clayton was nominated to chair the U.S. Securities and Exchange Commission and by May 4 he was sworn in. Since then, he’s refined the regulator’s approach to cryptocurrencies, overseen an expanded definition of “accredited investor” and, perhaps most importantly, approved and enforced the implementation of Regulation Best Interest and Form CRS.

Today: There have been few metrics that President Trump enjoyed touting more than the stock market. By early October, the S&P 500 index was up 59% since the last presidential election, despite an ongoing trade war with China and a March plunge attributed to the coronavirus. While Trump may loudly take full credit for market gains, he “barely has any of his own money in the stock market,” according to a report by the Associated Press.

Today: For advisors, one of President Trump’s more immediately recognized efforts at cutting regulations was delaying, and eventually vacating, the Department of Labor’s Fiduciary Rule. On the other hand, by supporting the creation of entities like Opportunity Zones, the Trump administration created a need for new definitions and regulations clarifying how investors could capitalize on the Zones. Despite Trump’s deregulatory ambitions, he is still in charge of a bureaucracy that needs rules to operate.

Today: President Trump made the biggest changes to the Dodd-Frank Act in 2018, when he signed a bill described as “the biggest rollback of bank rules since the financial crisis.” The 2018 measure was designed to ease rules on all but the largest banks and passed both chambers of Congress with bipartisan support, with 17 Senate and 33 House Democrats voting in favor of the bill. Among its provisions: raising the threshold for banks deemed too big to fail from $50 billion to $250 billion.

Today: Why settle for a sandwich when the buffet is in reach? In 2017, President Trump signed the Tax Cuts and Jobs Act on December 22, codifying an act introduced to Congress just weeks earlier. The law meant a new environment for advisors, changing the way they advised on topics from estate planning to 529 distributions. In addition to capping state and local tax deductions at $10,000, the act established permanent corporate tax cuts (the largest one-time reduction to the corporate tax rate in U.S. history: from 35% to 21%), temporarily raised standard deductions for individuals and temporarily lowered individual income tax rates.

Today: The official end of the Department of Labor’s fiduciary rule didn’t mean the end of its mission, in some form or another. While the implementation of its de facto replacement, Reg BI, sparked lawsuits and sowed confusion for some end-investors, regulations codifying who can give what advice are very much alive and well under President Trump. 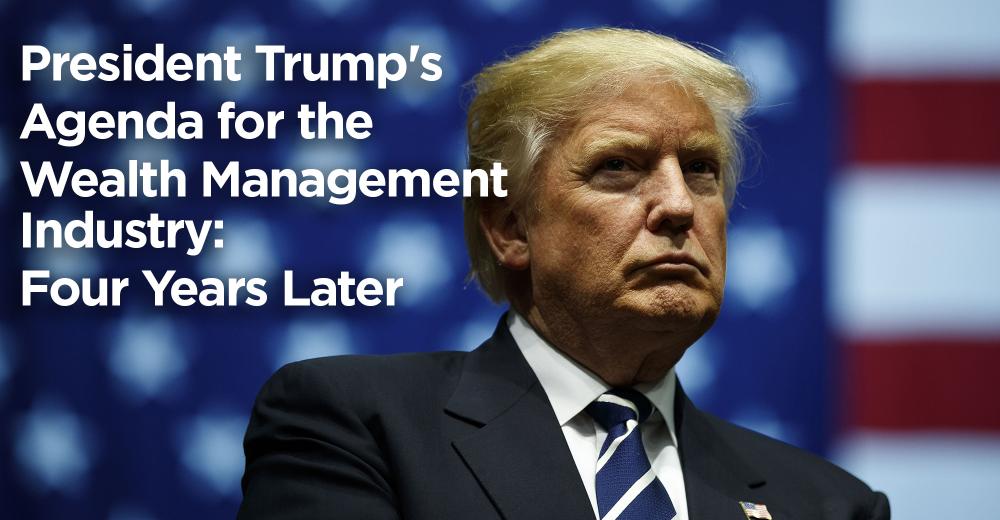