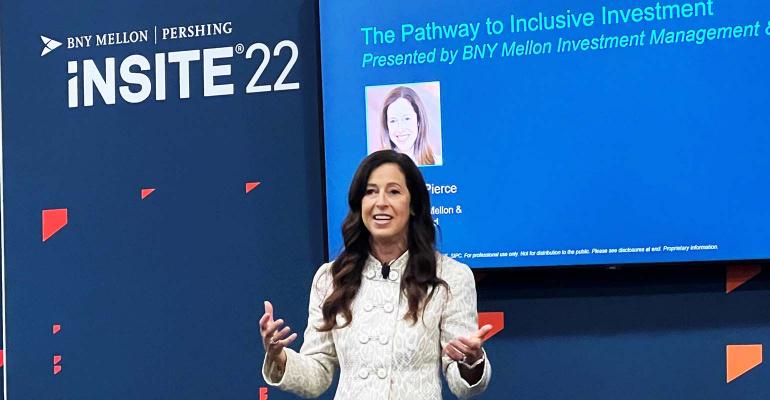 Attracting more female investors may require asset managers to admit what they do isn't as complicated as they want clients to believe, according to Pershing's head of ETFs.

Referencing The Pathway to Inclusive Investing, a report released by BNY Mellon Investment Management in February, Pierce discussed the disproportionately low number of female investors across financial services, as well as obstacles and methods to solve the disparity.

Surveying 8,000 women and men from 16 countries, as well as 100 asset managers with a combined $60 trillion in assets, the report's authors concluded that more than $3 trillion in assets could be gained by engaging more women; women investors are more likely to put their money into positive global and societal ventures; and an industrywide patriarchal culture (complete with an advertising bias that skews toward men) is discouraging a wide swath of potential investors.

Worldwide, almost two-thirds of the women surveyed believe that investing is an important path to financial independence and a successful retirement. In the U.S. and India, it’s as many as eight out of 10. Women also responded with a clear preference for meaningful investment.

“And so, we started to dig into why it is that there's this gap that women are not investing at the same rate as men,” said Pierce.

As few as one in 10 women feel they understand investing, the survey found, and less than a third feel confident about investing their own money, while 72% indicated that the financial services industry simply doesn’t speak their language.

“It doesn't make sense to them,” said Pierce, who believes that sentiment fuels the disengagement.

The biggest impediments to female investment come down to misapprehension and risk aversion, according to the report, often the result of “a tendency to use financial jargon and overcomplicated investment language in order to foster a sense that the investment customer is part of an exclusive club. This kind of marketing is actively off-putting to women ..."

On the asset manager side of the survey, Pierce noted, nearly nine out of 10 firms admitted that they primarily target male prospective clients in their marketing. “I found this shocking," she said. "And, even if it is true, that anyone would actually admit it."

After doing a little research on her own, Pierce said she found that advertisements did appear to be overwhelmingly aimed at male clients—­often through liberal use of risk-glorifying, danger-evoking imagery—and the language employed nearly always implied that the products were far too complicated to navigate without the wisdom of a trusted asset manager.

“I would venture to say that it’s not just those of us running portfolios,” said Pierce, “but also advisors dealing with clients [who are implying], ‘You need to hire us because we can do this really complicated thing for you. Don’t try to do it by yourself.’

“But it’s kind of having the reverse impact,” she said.

Pierce pointed out that women tend to be more risk-averse and set higher thresholds for the disposable income they have to invest. Only one in nine women surveyed identified as high-risk takers, while almost half put themselves in the low-to-moderate category.

“There's something that's going on in the language we use in our industry,” she said. “Women feel this is a very risky endeavor ... which links back to why the income hurdle is so high.”

The other interesting link, she said, is in the products in which women want to invest. As well as preferring comprehensible language and low risk, the majority are more apt to put their money where their values are. Pierce said around 55% of women indicated that they would invest more if that investment was aligned with their own values, rising to as much as 70% for women under the age of 30.

“Women not only want a financial return, they also want something that aligns with their values and what they believe in,” she said.

When asked whether representation was a factor in attracting female investors, Pierce said she wasn’t sure whether the gender or color of the individual offering the services had as much influence on the potential investor or client as their overall message.

“I think it's really more of the language,” she concluded, noting that even women who have risen to positions of leadership in the industry still struggle with messaging. “I think we're all a little bit guilty of just making this sound sophisticated, maybe because it feels better to us that we have jobs to do.”

Instead, Pierce suggested that it might be more effective to take the time to explain the intricacies of the potential investor’s options in speech that is as plain as possible, while emphasizing the impact their money will have.

“We have some work to do to make this work,” she said. “To speak a language that is not so complicated, that is less about justifying our value and more about simplifying and putting in plain English for investors what investing's all about.”