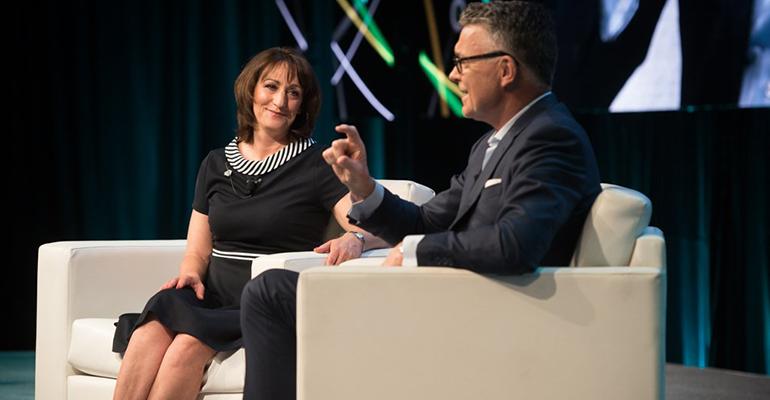 Integrations and tools like artificial intelligence are nascent in wealth management but have been proven to make a difference in other industries.

Top executives at Pershing, the custodian and financial services provider owned by BNY Mellon, acknowledged sweeping changes in the wealth management industry but also assured advisors at its annual INSITE conference on Wednesday that technology would be there to help.

“Bigger is better,” said Lisa Dolly, Pershing’s chief executive officer, about firms in the industry. Larger wealth managers have the benefits of scale—like specialized employees with better expertise and capital to invest in technology—and everyone knows that, including investors.

Dolly pointed to consolidation occurring and the increasing interest private equity firms have taken in wealth managers. The cottage industry is maturing and larger. More professionally managed organizations are emerging while the existing ones are getting bigger. There will be fewer owner-operated firms going forward, she said.

In addition to the size and nature of the wealth managers, regulation and client expectations are driving changes in the industry that companies need to keep up with in order to remain competitive.

“Financial management will absolutely trump investment management,” Dolly said. “We should expect that the successful financial advisor of the future knows where clients experience anxiety about money and that they can coach them in a much broader way in their financial life.”

Dolly had a positive spin though. Although wealth management has been slow to adopt it, much of what ails the wealth management industry will be eased or alleviated by technology that has already proven itself in other industries.

She and Jim Crowley, Pershing’s chief operating officer (who joined her on stage after her presentation) share an office and said technology is central in their discussions, no matter who is using it.

Pershing’s clients fall into one of three categories, according to Thomas Sholes, Pershing’s chief strategy officer: those who use all of their technology and business solutions and asking for more; those who use some of the services they provide; and ones that use fewer services and want Pershing’s to work seamlessly with other solutions providers.

Crowley said the company currently has more than 40 application programming interfaces that enable advisors to work seamlessly between other data and solutions providers they choose. Most recently, Pershing announced at Wednesday’s conference that its NetX360 open-architecture platform, originally announced in 2016, would better integrate with Envestnet’s Tamarac and would introduce a single platform so that both parties can access Pershing custodial documents via the customizable Tamarac client portal.

He was also excited about component-based software engineering, which he said will “expedite the speed of development and speed the transmission of information” to save advisors time.

Among other things, Pershing also is also working on better integrating MoneyGuidePro, launching a beta version of the new NetX360 Wealth later this year and eliminating all paperwork for advisors entirely. Crowley also said the use of artificial intelligence to communicate with clients and predict their behavior and bio recognition, similar to Apple’s Touch ID, for example, are on its do-to list.

Much of the new developments can be found elsewhere, even within wealth management, but Dolly said a company like Pershing, which aggregates so much data and is integrating further with more partners, must be cautious. She used the relationship between Facebook and Cambridge Analytica, which has faced criticism after the political firm gained access to private information of millions of the social media company’s users, as an example. Facebook users did not fully understand the risk of their information being used.

“We never want to surprise anyone with that fact,” Dolly said.