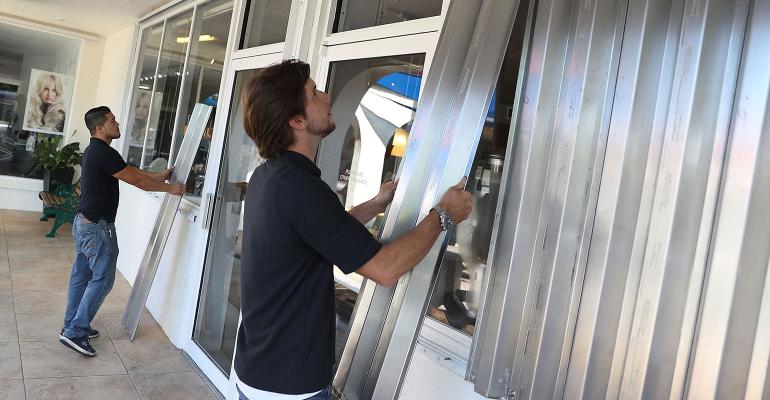 The Wall Street of the South has emptied out as the storm approaches.

By Hui-yong Yu and Jonathan Levin

The skyscrapers around Brickell Avenue house banks and money managers that have drawn clients from across the region and Latin America over the past decade. Built along Biscayne Bay, the area is especially susceptible to storm surge, sometimes flooding even on sunny days. On Thursday, it was added to a mandatory evacuation zone that already included Miami Beach, across the Intracoastal Waterway from Miami proper, and other coastal areas.

Traffic was light as many firms gave staff the day off to prepare their homes. As hours passed, the district began to feel abandoned.

Most employees at Bank of America Corp.’s offices at 701 Brickell Ave. were directed to work from home Thursday, and a retail branch there shut early, according to company spokesman Larry Grayson. Callers to Morgan Stanley’s office at 1111 Brickell Ave. and the bank’s private wealth management office at 200 South Biscayne Blvd. are greeted with recordings saying calls are being temporarily rerouted “due to circumstances beyond our control.”

“The whole of Brickell is evacuated,” said Nancy Olmos, an administrative assistant at Canero Immigration Law Firm at 1101 Brickell Ave., a gleaming glass tower a short walk from the waterfront. “We’re closed for today and tomorrow, and I’m sure Monday we won’t be open. Tuesday maybe.”

Weil Gotshal & Manges, several blocks down the avenue, has a phone recording saying the switchboard is closed. And Jones Lang LaSalle Inc., which has two offices on Brickell, has shut all of its Florida locations, said Alaina Kleinman, a spokeswoman for the Chicago-based commercial real estate services company, the world’s second-largest. Ocean Bank, at 1000 Brickell, posted a notice on its website saying all branches would close early at 3 p.m. and remain closed through Saturday.

Irma has maintained a collision course with Miami, threatening to become the most expensive storm in the nation’s history after battering Puerto Rico and devastating a chain of small Caribbean islands. To harden the area against storms, state and local governments have drastically overhauled building codes, trying to address vulnerabilities exposed by Hurricane Andrew in 1992, which blew entire second floors off houses.

Brickell, which rhymes with pickle, runs about 1.5 miles (2.4 kilometers) in an elongated J shape from the Miami River at the north toward Rickenbacker Causeway at the south, and is lined with office and condominium towers. The road, once part of U.S. Route 1, was named for William and Mary Brickell, who helped found Miami when they moved from Cleveland in 1871 and established a trading post.

Museums near both ends of Brickell Avenue have closed ahead of the storm. Vizcaya Museum & Gardens, in a landmark waterfront mansion, shut on Wednesday, according to its website. The Perez Art Museum Miami, on the Intracoastal Waterway that separates Miami and Miami Beach, will remain shut at least through Sunday.

The Miami Seaquarium, on Virginia Key off Brickell Avenue, closed Thursday, telling visitors on its website to check back later for updates.

The Fisher Island Club Hotel & Resort on Tuesday stopped accepting reservations for this weekend. The property’s ferry terminal was scheduled to close at 7 p.m. local time on Friday. The hotel said it plans to reopen Monday, depending on the storm’s impact.