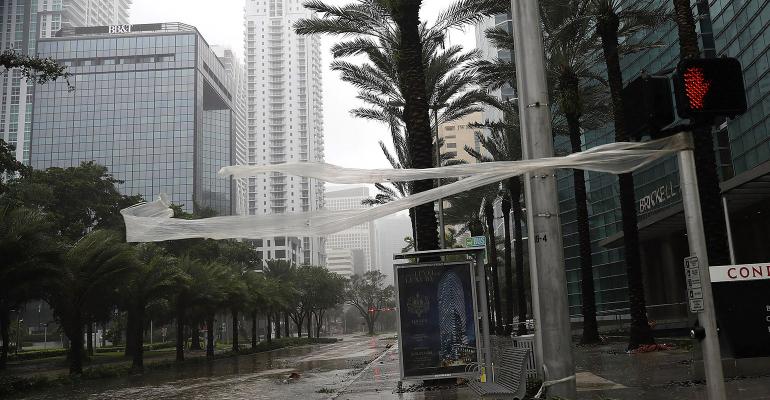 The flood waters promised to disrupt business in a district that was transformed over the past decade, with office towers and luxury condominiums now dotting the skyline where little sat when Hurricane Andrew hit Florida 25 years ago.

By Nathan Crooks and Jonathan Levin

Water over the roadway was a few feet deep, as side streets turned into tributaries near the local offices of Morgan Stanley, JPMorgan Chase & Co. and H.I.G. Capital, a Miami-based asset manager. At least two cranes collapsed and a roof blew off a home in nearby neighborhoods.

The flood waters promised to disrupt business in a district that was transformed over the past decade, with office towers and luxury condominiums now dotting the skyline where little sat when Hurricane Andrew hit Florida 25 years ago. The region also includes a Four Seasons and a high-end outdoor shopping mall anchored by a Saks Fifth Avenue. A number of large law firms also have outposts along the avenue.

But companies had days to prepare, and they may have escaped the worst-case scenario. Hurricane Irma was initially forecast to barrel straight into downtown Miami, then later shifted course to head up Florida’s west coast. Most employees of Bank of America Corp.’s offices at 701 Brickell were directed to work from home as early as Thursday.

By early evening Sunday, Brickell-area hotel guests who had been hunkered down in a ballroom and lobby area were allowed to return to their rooms. The knee-deep water which stretched along the avenue hadn’t receded much, but the wind had noticeably died down. Along the main avenue, high-rises built to a stringent code overhauled after Andrew didn’t appear to have suffered significant wind damage, but conditions still made that hard to assess. Brickell has Biscayne Bay to the east and the Miami River to the north, and has been known to experience minor flooding even on sunny days amid high tides.