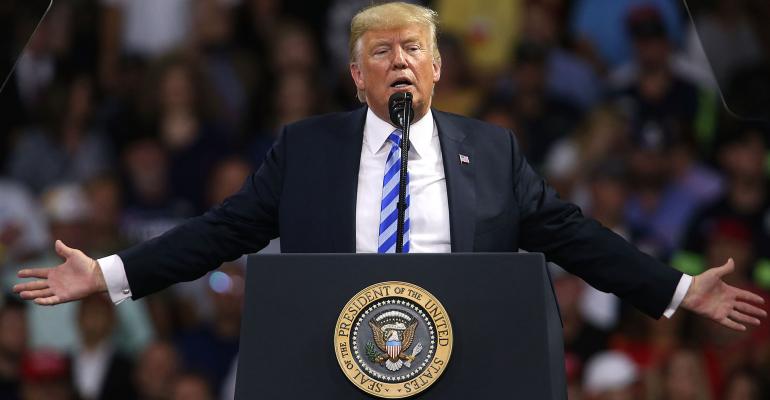 If Trump Loses, What Happens to Reg BI?

The rule will be on the books by the time of the election, but there are a few paths a new Democratic administration may take to change it, according to industry experts and investor advocates.

It is slightly less than nine months from Election Day, which will determine whether President Donald Trump wins reelection. Many wonder what a change at the White House could mean for a wide array of issues, but in the financial advice space, a looming question would be how would it impact the SEC's Regulation Best Interest rule?

The rule passed by a 3 to 1 margin among current SEC commissioners, with both Democratic appointees voting against the measure. It is set to go into effect at the end of June.

According to Knut Rostad, the director of the Institute for the Fiduciary Standard, the future of the rule depends not on whether a Democrat is elected to the White House but on which Democrat. An Elizabeth Warren or Bernie Sanders presidency could take a significantly different path when it comes to Reg BI than Joseph Biden or Michael Bloomberg, he said.

“There are Democrats that could pretty much leave (Reg BI) alone, based on what we know of their background with the financial services industry,” he said. “It would be a pretty expeditious and complete do-over if it was Warren or Sanders, and certainly Sen. Warren has made her views pretty well known.”

Previously, Warren expressed support for revisiting the U.S. Department of Labor’s fiduciary rule, which mandated that any advisor or broker advising clients on retirement accounts must comply with a fiduciary standard akin to the one registered investment advisors follow. Brian Hamburger, the president and CEO of MarketCounsel, noted that campaign rhetoric doesn’t always correlate with reality; for example, he said that Trump had promised to slash regulation and enforcement resources during the 2016 election, yet enforcement at the SEC has increased.

Since Reg BI is not always a premier issue for voters outside of the industry, many candidates haven’t been asked to take definitive stances on it, leaving a change in power at the White House a “wild card” for the industry, Hamburger said. However, if a Democrat wins in November, they will have the opportunity to name a new chairman to the SEC, and that individual will have the biggest impact on Reg BI’s future.

“Unlike a lot of initiatives at SEC, there's not industry consensus about whether Reg BI is what's best for the industry. This is Chairman (Jay) Clayton's baby," Hamburger said. “Clearly, an administration change that is likely to change the Chairman is a huge threat to Reg BI, because the existing commissioners other than Clayton aren’t all that excited either way. If there’s not a champion there grandstanding for the cause, then the rule faces some challenges in being eliminated or reversed.”

Even a moderately progressive Democrat would likely push for a reexamination of Reg BI, according to Barbara Roper, the director of investor protection at the Consumer Federation of America. She said that the passage of an amendment in the U.S. House of Representatives last year blocking Reg BI from taking effect indicated there was strong Democratic antipathy towards the rule (the bill did not progress in the U.S. Senate).

Roper said that Democrats might find it easier to make the argument that it’s necessary to amend Reg BI to fix a “mistake” of the Trump administration, rather than framing a new rule. A new slate of commissioners at the SEC may also decide to keep Reg BI, but interpret and enforce the rule in a way that would impose a more stringent hurdle for firms to meet the standard.

One of the largest outstanding questions affecting Reg BI’s future besides the election remains the ongoing court challenges against its legitimacy, including a suit filed by XY Planning Network arguing that the rule would give brokers an unfair competitive advantage over RIAs. If the case is not decided before the election, and if a Democratic president takes office in 2021, Roper said it is possible that the federal government may decide to not strenuously defend its own previously held position (just as the Trump administration chose not to vigorously defend legal challenges to the DOL fiduciary rule, which was later vacated in federal court).

As a result, Roper said those who have invested in complying with Reg BI may have to start over again if the rule is overturned, similar to what occurred with the DOL’s vacated rule. However, Roper said it was a problem of the industry’s own making for pushing Reg BI. She suggested that firms should try to comply with more stringent fiduciary rules, like Massachusetts’ proposed standard, to prepare themselves for anything that may happen at the federal level.

“There was a deal to be had that would have won investor advocate support and should have been acceptable to the industry, but they got greedy,” she said. “And they’re living with the consequences, with states pursuing their own rulemaking and by the fact that this could be reopened in the new administration.”