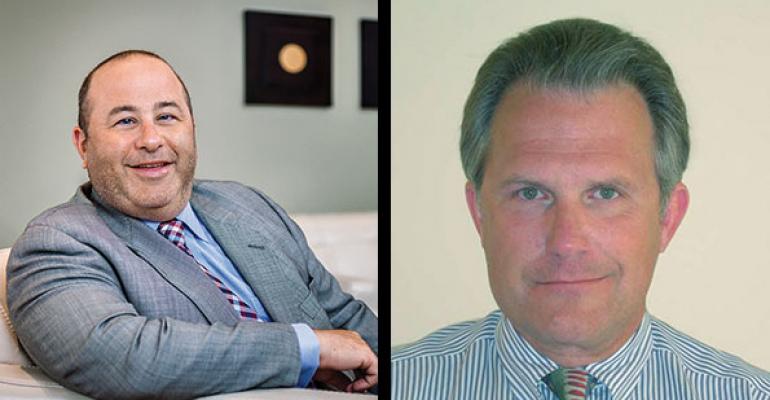 <p>Brian Hamburger, left, and Knut Rostad are the two remaining contenders in the Thought Leaders category of the <a href="http://wealthmanagement.com/wealth-management-madness-2015-bracket">Wealth Management Madness 2015 </a>bracket tournament.</p>
News>Industry

Fiduciary Roundtable: Where Is the Industry Heading?

Knut Rostad and Brian Hamburger discuss the recent regulatory shifts and the impact of expanding the fiduciary standard.&nbsp;

The issue of advisors’ fiduciary duty is top-of-mind these days, following announcements by both the Department of Labor and the Securities and Exchange Commission that they plan to move forward with rulemaking efforts requiring advisors to act in the best interests of their clients.

We sat down to talk through some of the issues with two of our Wealth Management Madness 2015 contenders: Knut Rostad, president of the Institute for the Fiduciary Standard, and Brian Hamburger, president and CEO of MarketCounsel.

WealthManagement.com: What are your thoughts on the DOL fiduciary rulemaking efforts? What do you think the final proposal will look like?

Knut Rostad: The DOL rulemaking is vital to investors and the capital markets. At stake is whether true fiduciary principles are injected into current rules. While the support of the President is obviously important, fiduciary advocates have yet to find their voice in the public square. It's hardly clear a fiduciary victory is at hand; the outcome could go either way. I fear the DOL proposal will reflect this view and be weakened at its core.

Brian Hamburger: I have no reason to believe it will differ in any significant way from their 2010 proposal except it will address the specific concerns raised by broker/dealers. Not much to account for the eerie delay.

WM: The big argument against a fiduciary standard in retirement accounts is that it will limit financial advice to the mass market and mass affluent. How do you respond to that?

KR: It's hooey. The 21st century equivalent to arguing the world is flat.

BH: I am absolutely confident that free enterprise and rapidly evolving technology will quickly step in to fill the gap should traditional firms decide to abandon that market. Call me an optimist, but those firms aren’t going anywhere.

WM: Will the DOL’s fiduciary standard proposal inform the SEC's fiduciary rulemaking, and if so how?

BH: They are already different. I have no reason to believe they, themselves, will be unified. The DOL proposal has increased pressure on the SEC to formally (and finally) address the issue. It’s embarrassing for them that the DOL has beat them to the punch on this.

KR: No. The SEC appears to have already set a course in addressing key fiduciary issues. As such, it's not clear at all that the DOL proposal will have much impact.

Far Less Than the Cost of Bad Advice

WM: How much would it cost to implement the DOL’s fiduciary proposal?

KR: I'm skeptical of any estimates, particularly self-serving industry estimates. The dynamics of the free market will have the largest impact on actual costs, and I'm not sure any independent estimates have even attempted to incorporate this part of the calculation.

BH: I don’t think anyone is suggesting that the fiduciary duty be imposed to all participants in the securities industry; we’re talking about a uniform standard for those providing investment advice to consumers. And that shouldn’t cost a thing because those firms should already be acting as fiduciaries when providing such advice, even if they were hiding behind the “solely incidental” exemption. Even if there is a cost, I’m sure it’s far less than the costs of bad advice and continuing erosion of investor confidence.

WM: The fiduciary standard, as it exists today, would not work for the brokerage industry, opponents have argued. Thoughts?

KR: On this point the opponents are absolutely correct. The fiduciary standard conceived under the Advisers Act was designed to generally exclude brokers, to separate advice givers from product pushers. Because, by definition, product pushers are conflicted and by definition, as professor Arthur Laby points out, advice is assumed to be "objective." Or, more simply, as my teenage kids might say—"Duhhhhhh."

BH: They may be right. But the brokerage industry has purposefully muddled the distinction between advice and brokerage transactions for a portion of their business. This is merely the consequence for the problem they created.

WM: B/ds who have dually registered advisors would say they're operating under a fiduciary standard, not that they wear two hats. How do you respond to that?

KR: Technically not incorrect, but misleading. This retort is confusing on its face as it can be interpreted in various ways. It exemplifies the cynical word games that seem to assume true advisors and investors are just not very smart.

BH: It’s a clever position but understand that dual registrants are only acting as fiduciaries when the client has engaged the firm to act as its investment advisor. When the dually registered “financial advisor” is working with a client otherwise (solely as a broker), clients would not receive a fiduciary standard of care.

WM: Thoughts on wirehouses and broker/dealers adopting policies requiring advisors to act as "all but" fiduciaries?

BH: It’s also a clever strategy to stem the tide but falls short of a legal requirement that they do so and is devoid of the corresponding client protections. But more and more brokers are asking the question, what’s stopping my firm from acting in my client’s best interests? Clients should be asking the same thing: why is my “financial advisor” fighting so hard not to have to work in my best interests?

KR: Show me the gray area between a salesman providing product information and opinions and an advisor without product or third-party incentives and I'll show you the "all but" or "almost" best interest standard. You can't. It doesn't exist in the real world.

WM: Predictions: When will we see a uniform fiduciary standard and what will it look like?

BH: To be clear, we already have a fiduciary standard. As for when we’ll have additional clarity on the scope of who is subject to the standard, who’s going to be our next president? Check with me in 2017.

KR: Can't say. My crystal ball is in the shop.