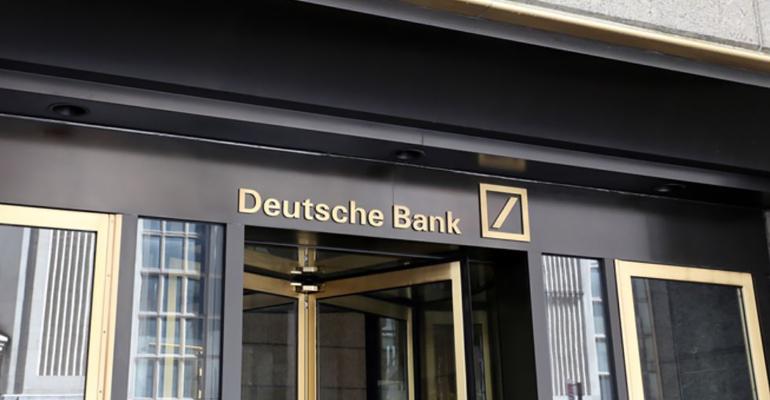 (Bloomberg) -- Inside 60 Wall Street, the American headquarters of Deutsche Bank AG, the signs of trouble are everywhere.

Begin on the 46th floor, overlooking the East River: brown boxes have been stacked in the offices of the senior-most executive in the Americas. More than 40 flights down, on the trading floor, seats sit empty at mid-morning. Computer screens are black. Some who remain are openly hunting for jobs at rival banks. Their bosses know, and don’t mind.

On a recent weekday, an executive spied junior traders enjoying beers at the nearby Full Shilling pub. It was just past 1 p.m. Older traders could be found at Cipriani on Wall Street, where the famous bellini cocktails are served in wood-paneled rooms or on a terrace between stone ionic columns.

So it goes nowadays at Deutsche Bank in New York, where everybody, from the executives down, seems to sense that more bad news is coming from Frankfurt.

The Wall Street operation was once a symbol of the German bank’s vaulting ambition to go head-to-head with American finance in its own backyard. In recent years, the business has been a source of regulatory and political headaches while losing ground and talent to rivals.

Deutsche Bank now plans to tell hundreds of U.S. equities and rates traders that they will no longer be employed there, people familiar with the matter told Bloomberg. Chief Executive Officer Christian Sewing may present a major restructuring plan as early as this week, slashing as many as 20,000 positions worldwide.

After a slow drip of news and rumors about potential job cuts, with limited direct communication from Sewing, a number of U.S. staffers have grown to resent their London and Frankfurt-based counterparts, according to interviews with nearly a dozen current and former employees. Kerrie McHugh, a spokeswoman for the bank, declined to comment.

Executives in New York have for more than a year worked under the cloud of whether the U.S. operation would be sold, gutted or spun off.

Typical internal battles over who bore certain expenses took on more weight when every unit was under a microscope. Peter Selman, who came out of retirement in 2017 to revive the equities business, unsuccessfully lobbied Treasurer Dixit Joshi last year to move as much as 300 million euros of costs allocated to his unprofitable unit to the fixed-income business, people briefed on the talks said.

For his part, Sewing has said consistently -- and publicly -- that he was committed to the U.S. investment bank since taking over as CEO last year. But the new chief has been struggling to restore confidence among investors and regulators amid the bank’s moribund profitability. After a failed attempt to merge with Commerzbank AG that was encouraged by Germany’s own finance minister, shareholders are pushing for a turnaround plan. Many executives aren’t waiting for that.

Selman is now among dozens already on their way out, the people said. Zia Huque, the CEO of Deutsche Bank’s securities division in the U.S., hasn’t been seen at work in weeks. Tom Patrick, the head of the Americas who joined the bank a decade ago and oversees the relationship with the Federal Reserve, seems to be packing up his office, and Deutsche Bank is considering his replacement.

That’s left Ashley Wilson, the co-head of equities trading in the Americas, in charge of restructuring the unit.

Longtime traders like Brad Kurtzman, Craig Bench and Powell Fraser have also left the bank, followed by dozens of second- and third-tier executives -- many of whom can’t find jobs elsewhere. Some U.S. managers said that for years they advised cutting some smaller pieces of the trading business to improve profitability. As they exit, they lament that senior executives didn’t heed their counsel and now need the heavy ax.

Last week, the American business got a lift with the news that it passed the Federal Reserve’s annual stress test. Sewing sent a note to staff calling it a “great step forward.” The feeling of triumph didn’t last long, replaced within hours by more reports of deep job cuts in the U.S.

The German firm has already announced that in two years it will start departing the tower at 60 Wall Street that’s been its home since the early 2000s for midtown digs offering a Central Park view.

As the bank’s workers spill out into the financial district watering holes, a popular question is how many of them will be around to leave Wall Street.

--With assistance from Melissa Karsh.

To contact the editors responsible for this story:
Michael J. Moore at [email protected]
David Gillen