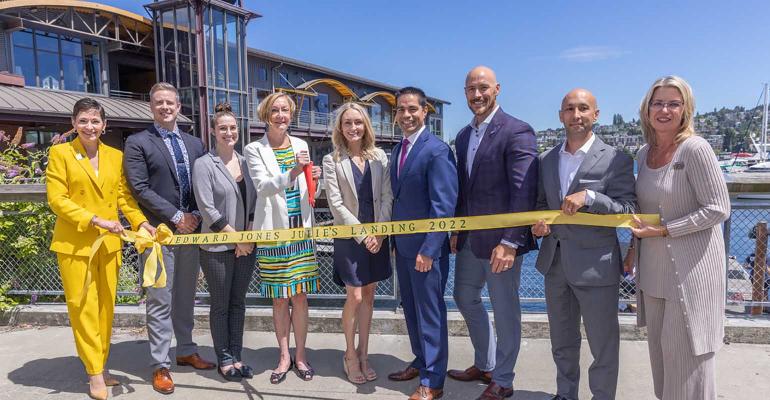 Seattle is the latest metro area where the brokerage has opened a multi-advisor office; but the firm expects to take its teaming model to small, rural locations—Edward Jones’ bread and butter—too, says Managing Partner Penny Pennington.

Edward Jones announced last month it was expanding its teaming options to allow for “more flexibility and choice” for its nearly 19,000 advisors and branch support members across the country. Last week, the firm opened its newest multiple-financial-advisor office in Seattle, with advisors Geoff Meno, Marianne Hepper and Eric Appesland, a trainee, teaming up in that location.

“This is something that in, especially some of our larger metropolitan markets, is going to become more ubiquitous,” said Penny Pennington, managing partner at Edward Jones. “Sharing real estate has an economic benefit to it; also as financial advisors are under the same rooftop, they’re able to inspire each other, to help support each other in their training and development. They’re able to foster this culture of mutual support that Edward Jones has as part of our secret sauce.”

Edward Jones has a long history of operating under a one-FA-per-branch model. But the firm decided to start experimenting with different teaming options to give its advisors more choice and flexibility in how they want to grow their practices and how they want to team, Pennington said.

The firm’s advisors are not required to team up, but by the end of 2023, all its advisors will have the opportunity to share a branch office with one other advisor, if they so choose. Edward Jones currently has 30 active multi-FA locations—with three to six advisors sharing office space—in metro areas across 21 states, including in a suburb of Detroit and St. Louis. The firm also has 55 two-FA offices open and an additional 250 in various pre-open stages.

But the firm is not limiting the model to major metro areas, Pennington said. After all, the firm built its business in small suburban and rural towns, where the big wirehouses didn’t go.

Under Seattle’s teaming model, each advisor has their own profit and loss statement. But the firm is also experimenting with other models, including one where there is an associate advisor role operating under a veteran. Those advisors would work with the same clients and share the same P&L statement.

Edward Jones is also considering adding other branch team roles beyond the traditional branch office administrator. Those may include a client concierge, branch staff leader, registered branch associate and a couple others.

“This will help a financial advisor run their practice more efficiently and more effectively, with different kinds of roles in the branch,” Pennington said.

The firm also views the new teaming approach as an opportunity for succession planning in a branch.

“As we think about folks who want to come into this profession but may want a slightly longer glidepath than going from a career changer directly into the role of a financial advisor—going into a multi-FA branch, a multi-staff branch is an opportunity for people to have different kinds of career paths at our firm,” Pennington said.

“I think it’s long overdue, to be honest with you. It’s not necessarily that most advisors wanted to do so, it’s that they wanted the flexibility to do so,” said Jason Diamond, vice president and senior consultant at Diamond Consultants. “It’s a nod to certainly some of the attrition, but also the fact that there are real benefits to teaming, not least of which is clients get a diverse set of perspectives and also it frees up advisor capacity, which every advisor complains about.”

The brokerage has seen some high-profile advisors depart recently. For example, Jennifer Marcontell, who had $1.7 billion in assets, recently jumped ship for Ameriprise, according to published reports. Marcontell started her career at Edward Jones in 1999.

“It shows that management is taking note of those moves; they’re not just sitting idling by and saying ‘Well, too bad,’” Diamond said. “They’re actively trying to do something.”