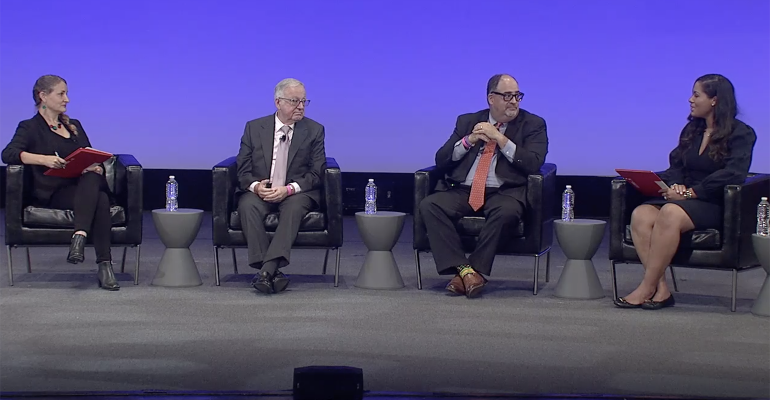 Diversity Is Not a Pipeline Problem; It’s a Networking Problem

“You can’t have the excuse anymore of saying, ‘Well I can’t find any Black and brown talent,’” said advisor Rianka Dorsainvil, speaking at the Morningstar Investment Conference this week.

A common refrain MarketCounsel Chief Operating Officer Walter Booker hears from advisors is they’d love to hire people of color, but they can’t find the talent. Yet people of color represent a third of the U.S. population, and 80% of financial advisors in the RIA channel are white males, he said.

“You’ve got to ask yourself, ‘If you can’t find a third of the population, where are you looking?’”

During a panel at the Morningstar Investment Conference, wealth management executives said the industry’s diversity problem was not because of a talent shortage; there are plenty of highly qualified, nonwhite, nonmale financial professionals out there. Advisors just aren’t doing a good job finding them and then retaining them.

“The goal is not to perpetuate what we have,” Booker said. “It’s not sustainable. The goal is to create something new, different and better on a continuous basis and that means being open and evolving proactively, on purpose, intentionally and with a very clear direction, and some subset of that is the talent you attract to the organization.”

Related: Why Diversity and Inclusion Reaches a Screeching Halt in Wealth Management

Mark Tibergien, the former CEO of Pershing Advisor Solutions and an independent director of Pathstone, a $20 billion multifamily office business and RIA, said the industry has not been very good at developing a human capital strategy.

“To the extent that there is any kind of talent shortage, it’s because there hasn’t been a conscious effort around what your brand positioning is in the marketplace. That would include approaching diverse candidates, but candidates in general.”

Many firms haven’t made efforts to value different contributions and create career paths for individuals to develop.

“Without a framework for how you’re going to attract more people to your business and then keep them, I think it makes it very difficult for firms to make any kind of an impact on diversity as well,” Tibergien said.

He adds there is more of a capacity problem, rather than a talent shortage.

“There’s a physical limit to the number of active relationships that any one advisor can manage. So if you don’t increase capacity, you limit your ability to grow,” Tibergien said.

The industry should also be aware of a gross assumption in the recruiting and networking process that clients would only want to deal with people who look like them. Tibergien pointed to the example of former LPL advisor Eileen Cure, who allegedly told her staff she didn’t want to interview any Black candidates.

“I think in most cases what people are looking for is competence,” Tibergien said. “The greatest indignity is a tendency to underestimate people.”

Finding white male advisors is pretty easy, said Rianka Dorsainvil, co-founder and co-CEO of 2050 Wealth Partners, a virtual, fee-only comprehensive financial planning firm. But advisors have to be willing to put in the work to find more diverse candidates, and it takes time.

In order to do so, advisors need to expand their network; Dorsainvil suggests attending conferences that you may not normally attend, such as the Association of African American Financial Advisors, and recruiting from historically black colleges and universities (HBCUs), many of which have CFP-registered programs. Get involved with the Financial Planning Association’s Knowledge Circles, which are dedicated groups for different communities, she said.

“You can’t have the excuse anymore of saying, ‘Well I can’t find any Black and brown talent,’” she said.

The panel brought up another common issue when it comes to talking about diversity in financial services: Some white, male advisors often feel threatened by the discussion. Tibergien pointed to a recent Twitter response to Dorsainvil, who was promoting the Morningstar panel. A white advisor, who goes by Theodore Beza, wrote: “Diversity, Equity, Inclusion: The holy trinity of corporate woke-ism. We who have worked in the corporate world know what ‘diversity’ really means when we hear it— ‘white men go to the back of the line’ #antiwhite”

Diversity, Equity, Inclusion: The holy trinity of corporate woke-ism. We who have worked in the corporate world know what “diversity” really means when we hear it— “white men go to the back of the line” #antiwhite