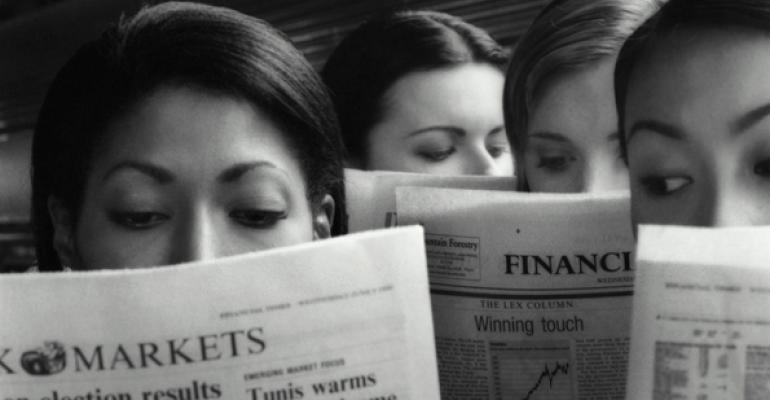 Women still only account for 23 percent of CFPs, Michigan financial advisor is arraigned on embezzlement charges, and Moss Adams merges with Hein & Associates.

The CFP Board launched its Center for Financial Planning nearly two years ago with the goal of developing and sustaining diversity in the CFP profession and boost younger talent. The Board built upon its Women’s Initiative, meant to address the lack of gender diversity within the profession, and its "I Am a CFP Pro" campaign earlier this year, which featured two young, diverse women as spokespeople. Despite these efforts, the percentage of women CFPs remains unchanged from previous years, at 23 percent, according to a new survey of CFP professionals. The ranks of CFPs are skewing slightly younger, with nearly 24 percent under the age of 40, compared with 22 percent in 2015 and 21 percent in 2013. The results of the study, which was conducted by Fondulas Research and was a random sample of CFP professionals that produced 800 completed surveys, did not differ significantly from past years, with 76 percent indicating they’re very satisfied with their decision to pursue the certification. Jason Bescoe, owner of Atlas Valley Country Club in Genesee County, Michigan, was arraigned this week on a felony charge of embezzlement and a charge of assault. The Genesee County Sheriff's Office executed a search warrant of both of Bescoe’s businesses, after a possible case of elder abuse signaled a possible Ponzi scheme. “Can't go into much detail, but I did give you a little bit of a hint when I talked about buying a country club, buying a house on a lake—a lifestyle perhaps that takes a considerable amount of money to finance,” Genesee County Sheriff Robert Pickell told ABC-12 News. According to police, Bescoe illegally took $300,000 after a client approved a money transfer. In addition, the State of Michigan Licensing and Regulatory Affairs (LARA) and the Corporations, Securities & Commercial Licensing Bureau (CSCL) suspended Bescoe’s and Research Money Management’s registrations after the firm failed to file required reports under a conditional registration agreement made in April 2016. The agreement came about following a history of conducting business without being registered as an investment advisor representative. If convicted, he faces up to 20 years in prison. When asked about the allegations, Bescoe insisted, "It's just not true, simply not true." Two of the nation’s largest financial firms announced plans to merge. The deal to merge accounting, consulting and wealth management firm Moss Adams with accounting firm Hein & Associates LLP will be effective November 1, 2017, according to a press release. The merger will allow Moss Adams to broaden its scope, with new offices in Denver and Houston, and increase its strength in Dallas and Orange County. Hein, which offers accounting and advisory services to individuals and groups, also carries a well-known oil-and-gas practice, which will enhance Moss Adams’ versatility. "This combination presents us with an opportunity to diversify our capabilities and gain access to deeper resources that will help us to better serve our clients," said Jim Brendel, managing partner at Hein. "It became clear as we learned more about Moss Adams that there's also a strong cultural fit, which was a critical factor in our decision." The merged firm is expected to bring in $600 million in revenue.