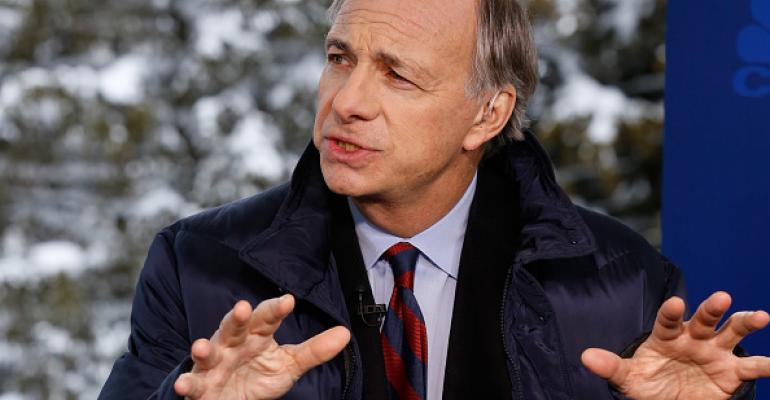 (Bloomberg) --The Federal Reserve should more closely monitor the economic struggles of the bottom 60 percent of the economy when making policy since “average statistics” are camouflaging what’s really occurring in the U.S., billionaire Ray Dalio wrote in a report Monday.

Dalio noted wide disparities in factors including labor, retirement savings, health care, death rates and education between the top 40 percent and bottom 60 percent of the country. The founder of Bridgewater Associates said it would be a “serious mistake” for the Fed to just focus on a national average as it could lead the policy makers to see a brighter economic picture than the reality.

“Because the economic, social, and political consequences of an economic downturn would likely be severe, if I were running Fed policy, I would want to take this into consideration and keep an eye on the economy of the bottom 60%,” Dalio said in his Daily Observations report. “Similarly, having this perspective will be very important for those who determine fiscal policies and for investors concerned with their wealth management.”

The difference in the financial conditions for the two groups -- due in part to whether they can take advantage of the market rally -- is a major cause of slowing growth, he wrote. The gap between the two economies will only intensify over the next five to 10 years, as changes in demographics will challenge the government’s ability to meet pension and healthcare demands, while changes in technology will continue to impact employment, he said.

The disparities he listed include:

Fed officials have struggled to understand contradictory economic data and what that should mean for monetary policy. The Federal Open Market Committee hiked rates in March and June, primarily spurred by the expectation that robust job gains would eventually raise wages and inflation. Surprisingly low inflation in recent months, however, has caused several policy makers to waiver in their resolve to move again in December.

Unemployment fell to 4.2 percent in September, its lowest level in more than 16 years, while inflation has languished well below the central bank’s 2 percent target. Fed Chair Janet Yellen has called this a “mystery,” but has signaled her desire to continue raising rates gradually. Investors see the probability of a December hike at about 80 percent, according to pricing in federal funds futures contracts.

Dalio has said the Fed has given itself limited room to maneuver in the event of a downturn, and therefore must be careful not to trigger one as it moves towards tightening monetary policy.

He has also said that the longer-term picture for the U.S. is worrying because of the abundant debt and non-debt obligations, like health care and social security, that are coming due, creating a squeeze.

“This squeeze will come gradually, not as a shock, and will hurt those who are now most in distress the hardest,” he said in a post in May.