/sites/all/themes/penton_subtheme_wealthmanagement/images/logos/footer.png
Recent
Recent
Thanks to Pandemic Puppies, CRE Investors Are Turning Their Attention to Veterinary Clinics
Aug 08, 2022
Seven Must Reads for the CRE Industry Today (Aug. 9, 2022)
Aug 08, 2022
KKR Sees ‘Golden’ Chance to Snap Up Risky Debt Amid Market Chaos
Aug 08, 2022
PFAS: How Emerging Regulations and Recent Litigation Are Affecting Buyers, Sellers, and Developers of Real Property
Aug 08, 2022
Featured
The 10 Best and 10 Worst States in Which to Retire in 2021
Jul 15, 2021
Poll: 15 Classic Books on Investing and the Markets
Apr 03, 2020
Fifteen Must-Listen Business Podcasts for Advisors
Aug 14, 2020
Celebrity Estates: Jay Leno and Planning for Classic Car Collections
Feb 22, 2022
Bloomberg
brought to you by 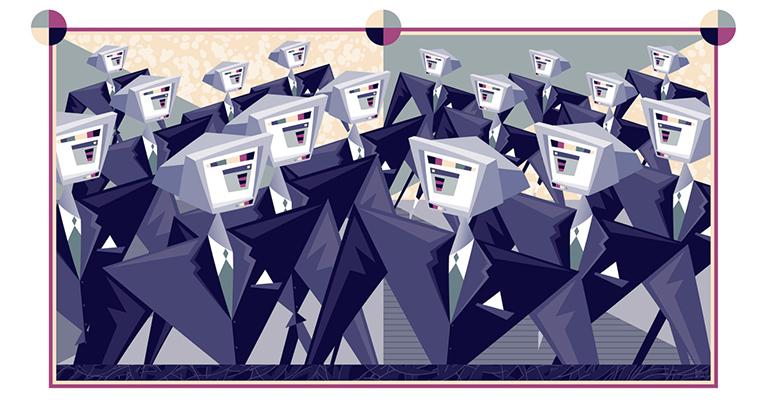 A Bull Market That Creates Few Jobs in Finance

The big difference this time is technology and automation.

(Bloomberg View) --Today, we are going off the beaten path with an interesting look at an aspect of employment data. Stick with me, because what we found was a bit surprising.

The subject of Wall Street employment came up via my colleague Josh Brown, who mused that this may be the first bull market when Wall Street jobs didn't grow.  Finance, of course, is more than just Wall Street: it is a large and diverse industry, encompassing many different occupations.

Thus, we begin our search at the U.S. Bureau of Labor Statistics. The BLS has 26,709 employment-related data series; I refined and eliminated all but 27 subsectors, keeping only those job categories that are finance related. I removed all of the obvious subsectors as well as real estate, auto leasing/rental and other such segments. I left out some insurance occupations, but I did include insurance jobs that appeared to be related to investing.

The list is admittedly imperfect, but it gives a pretty good sense of finance-industry employment back to the start of the Great Recession in December 2007.   The big takeaway is that since then, this finance-related group has dramatically lagged the overall economy in job creation, growing just 0.7 percent. Compare that to total private-sector employment gains during that period of 6.6 percent.

Not surprisingly, the job gains and losses tracked broader changes in the economy, from automation to the responses to the credit crisis. However, the devil is in the details, and in the data. It reveals quite a few surprises.

Let's start with the outliers: the largest job declines were among "savings institutions," with a drop of 43 percent; the biggest gainer was "investment advice,” with a 42 percent gain.

If I had to guess, job losses at savings institutions were a result of automation and technology. But one must also surmise that a decade of zero percent interest rates is pressuring customers to look elsewhere to park their money.

I was more surprised at the gains in investment advice -- not so much the direction, but the magnitude. I would guess that the underlying reasons for this big increase can be traced to three forces. First, after the financial crisis, more people decided they were better off having a professional to speak to, hold their hand and otherwise assist in financial decisions. Second, there has been a general shift toward the registered investment adviser and away from the broker-dealer. Third, the move to passive indexing tends to favor asset allocators, who I believe are included in this category.

Another surprising loser was "monetary authorities and central banks." For all of the activity by the Federal Reserve during and after the financial crisis, employment declined 5 percent. Here again, we might be able to lay off some of this on technology and automation.

"Commercial banking" also had a decline, though at 3 percent it's almost a rounding error.

"Credit card issuing" is actually pretty surprising, with a 20 percent decline, despite more Americans than ever charging it.  Again, I have to think automation is a big factor.

And yet there's "financial transaction processing and clearing," with a 21 percent gain. That’s big, considering the decrease in bond trading and the general shift toward passive index investing. On the other hand, I imagine there has been a big increase in fintech, which hardly existed a decade ago and still isn't an employment subcategory in the BLS data.

Finally, there's "other financial activities, including funds and trusts," which came in with a 26 percent gain. Intuitively, I have to think this reflects wealth inequality and efforts to transfer assets to heirs and limit exposure to the taxman. Similarly, the 19 percent gain among "insurance, brokerage and related services" and the 15 percent rise among "insurance agencies and brokerages" is likely a result of estate planning.

These numbers give us some clues about how finance is changing. It isn't so much that there have been layoffs -- of course, there have been; it's that we are in the midst of a wholesale restructuring of how financial services are provided.

I rarely make many forecasts, but I will venture one here: More changes are coming to financial sector employment and probably in ways that will continue to surprise us.