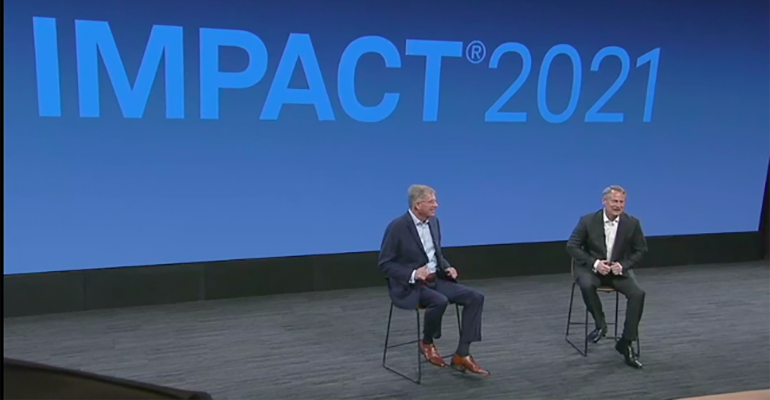 During the opening of Schwab’s virtual IMPACT conference, Walt Bettinger said investors were seeking an “even higher level” of personalization.

Charles Schwab President and CEO Walt Bettinger called personalized investing a “freight train” for the industry and cautioned RIAs to be a part of it as it barrels through the market, during a conversation with Bernie Clark, the head of Schwab Advisor Services, that marked the start of the company’s annual IMPACT conference.

The conversation, which was conducted at Schwab’s Texas headquarters, included M&A in the RIA space, the COVID-19 pandemic and the unabated growth in the RIA industry. Clark noted that all industries faced sea changes brought by the rise in personalization, and Bettinger acknowledged that while RIAs stressed personalization for some time, investors were seeking “an even higher level” from their advisors.

“The idea that ‘I’m going to take my money and simply turn it over to some fund or ETF and just trust that manager or trust that index is going to invest the way I want,’ I won’t go as far as to say those days are gone,” he said. “I don’t think they’re gone, and maybe they’re not numbered, but they’re going to be challenged.”

Bettinger said tech advancements introduced personalization opportunities for large and small investors alike, and could manifest in things like direct or thematic investing. He recommended advisors and firms consider opportunities for personalization across their business, encouraging them to ask themselves if there were questions they were regularly asking clients, when they were asking those questions, and how they were using data to anticipate client needs.

“How do you get that data and analyze it?” Bettinger said. “Do you make sure in the process that you avoid what we like to say at Schwab, and that is that you don’t want to be doing things that are creepy with data.”

Clark and Bettinger both underscored the continuing M&A industry trends while acknowledging that sellers were sometimes harder to find than buyers. The duo also stressed that Schwab Advisor Services’ role in the industry was not based upon a firm’s size, with Clark remarking that any business at any size represented the “life’s work” of its owner, and the wealth amassed represented an investor’s “life’s wealth.”

“All our big advisors were smaller advisors at some point in time, especially with the tripling over the last decade,” Clark said.

This emphasis on small firms echoed previous assertions from Bettinger and others that Schwab was not only interested in larger, $1 billion-plus RIA firms to the detriment of firms with less than $100 million in assets under management; in a February 2020 business update call, Bettinger said such assertions were “inaccurate, naïve and inconsistent” with their work in the RIA space.

Clark acknowledged that there were some aspects of the conference that could only happen in-person, but he believed there were also benefits to the virtual presentation and promised the 2022 IMPACT conference would be in person in Denver, Colo.