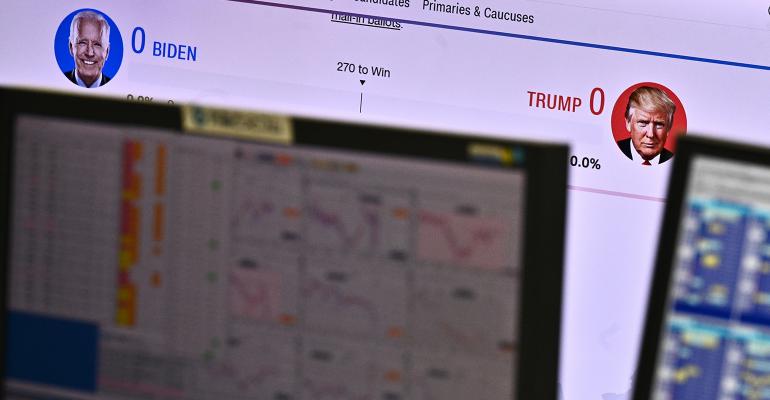 Financial advisors don't see major disruptions to their clients or their practices despite the uncertainty of the election outcome.

The result of the presidential election is still unknown, yet many advisors say they don't see much impact on their clients or practices regardless of which candidate, Joe Biden or Donald Trump, ultimately prevails.

Some, such as Douglas Boneparth of investment advisory firm Bone Fide Wealth in New York, said there were similarities among both when it came to positions that would affect financial services.

“I don’t think either candidate is going to change a whole lot when it comes to the wealth management industry,” he said. “I think both are pretty pro-Wall Street. So, I don’t anticipate there being a lot of change. And I don’t anticipate change in the financial services happening quickly. I think just historically change happens slowly in our profession.”

Some advisors find they are working harder to keep client anxiety at bay.

"We have received calls from some of our clients asking to go to cash but luckily, we have been able to talk them out of it,” said Vincent Barbera of Newbridge Wealth Management in Berwyn, PA. "There is definitely some real anxiety. But for a historical perspective, check out the presidential election in 1876 between Hayes and Tilden."

"As planners, we are focused more on any potential tax impact if there is a blue wave," he said. "We would expect our clients’ tax burden to increase so we are actively running tax projections.”

Others, like Laura LaTourette of Family Wealth Management Group in Dahlonega, Ga., says the market traditionally doesn’t care very much which party controls the presidency. “The market is green, it’s not red or blue,” she said.

Joe Conroy, owner and financial advisor of Harford Retirement Planners in Bel Air, Md., agreed. “There’s going to be priorities but it’s really going to come down to free markets. That’s going to have a bigger influence than who’s in the White House,” he said. “I think there’s a couple things post-election that look good for the market either way the election goes. With a resurgence in COVID-19 numbers, I think a stimulus package would go a long way toward helping performance.”

Andrew Tudor, an RIA with Alchemist Wealth in Cincinnati, said “The stock market has not largely favored one party over the other, it is based on economic cycles.”

“A good advisor helps clients to focus their energy on what they can control,” he said. “That includes savings habits, investing behavior, proper diversification, and matching the time horizon of their goals to the strategy we choose. The outcome of the presidential race is not one of those things that we can control.”

Lauryn Williams, founder and planner at Worth Winning, in Dallas, questioned whether any potential market reaction would actually hinge on the specific election result at all.

“React to what? None of us knows,” she said. “The biggest concern with a reaction would be riots or some of the things that people are expecting. Just political unrest. Markets reacting to something like that more so than actually who wins or who loses.”

Ultimately, she maintains the election doesn’t really matter to the advice she is giving her clients.

“I don't care what the markets do,” she said. My clients are in their 30s, mostly, with some in their 20s, even. I’m not doing anything different. The election is a non-factor.”

Indeed, many advisors said the trajectory of COVID-19 as significantly more likely to impact the markets than the outcome of the election.

“A lot depends on what is going to keep happening with COVID-19, and the parallel impact on the economy. That’s the area of focus for any administration,” said A. Valerie Mirko, a partner with law firm Baker McKenzie.

Ultimately, there was an overarching desire for election season to just be over.

“One of the things that's frustrating is it feels like it’s similar, everything is politicized, more than I remember,” said Andrea McGrew, chief compliance, legal officer with USA Financial. “My hope is no matter who wins the election, we stop thinking about what party you’re with and start thinking about investors.”