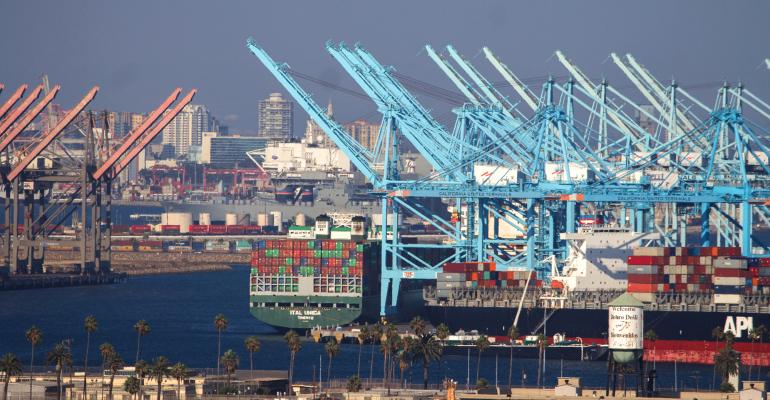 The near-shoring of manufacturing to Mexico may shift more traffic toward Texas.

U.S. imports from Asia fell to the lowest point in seven years in March, as retailers and manufacturers canceled orders of non-essential products. Cargo volumes at U.S. ports are expected to drop by 20 to 30 percent year-over-year in the first half of 2020, according to the American Association of Port Authorities (AAPA).

The overall manufacturing slowdown prior to January 1, 2020, which began with the trade war with China, was exacerbated by the drastic drop in consumer demand at the peak of the U.S. coronavirus crisis in April and May. The crisis resulted in cancellation of 20 percent of inbound U.S. container capacity, according to research from real estate services firm Transwestern.

The ports of Los Angeles and Long Beach were the first to feel the impact of a slowdown in international trade, with volumes dropping more than 30 percent in March, says Miami-based Walter Byrd, executive managing director for industrial services with Transwestern.

He notes that U.S. retailers routinely order products from China ahead of the three-week Chinese New Year, which starts in mid-February. But this year, China’s manufacturing sector had shut down due to COVID-19. Once it restarted and began filling those orders, COVID-19 came to America and consumer demand plummeted.

As a result, “There is a major imbalance in supply and demand—everything is out of whack!,” notes Gregory Healy, senior vice president and head of location strategy consulting and supply chain solutions with real estate services firm Colliers International.

The excess of inbound consumer goods presents a potential for a national bottleneck of loaded containers throughout the U.S. port system, as some retailers and manufacturers are failing to pick up merchandise ordered due lack of storage space, reports JOC.com.

Consequently, demand for industrial space is skyrocketing, according Healy. He notes that in markets like Southern California, where industrial vacancy is near zero, developers are moving east of Ontario to Banning, Beaumont and Perris to build million-+-sq.-ft. warehouse facilities. They are also converting retail stores near consumers into fulfillment centers.

The widespread consumer shift to e-commerce accelerated by COVID-19 may be permanent, as any behavior continued for at least 28 days is likely to become a habit, Healy adds.

As a result, he believes industrial will continue to be the best bet for investors and suggests that they consider redeveloping obsolete shopping centers and malls as last-mile fulfillment centers. With new technologies, such as robotics, these facilities can provide a cost-effective, last-mile opportunity, as they are located in close proximity to large consumer populations, have good ingress and egress and provide access to major freeways. (Rezoning retail centers to industrial use might be a challenge, especially since retail sales taxes are revenue generators for cities, Healy notes).

Meanwhile, essential products, including medical supplies and food, continue to move through the ports, which have been designated as an “essential service” and have remained operational throughout the pandemic.

In the long term, the COVID-19 experience might lead to more on-shoring of critical supplies and near-shoring of many products in Mexico which have historically been produced in China, according to Byrd. There is also likely to be a shift in supply chains away from China to other Asian nations, including India, Bangladesh, Vietnam, Indonesia, Taiwan and Malaysia. This can’t happen immediately, however, as it takes time to re-establish manufacturing operations and ramp up a supply chain, he adds.

Healy agrees, contending that the massive stream of China-manufactured products into the U.S. was already declining prior to COVID-19. But the pandemic is accelerating the shift. Near-shoring to Mexico offers many advantages for U.S. companies, as it provides proximity to U.S. consumers and is easier to manage and more cost-effective, when all factors are considered, including transportation, tariffs, speed to market, labor issues and geopolitical risks.

Year-to-date imports from China are down 37 percent compared to the same period in 2019, and Mexico is now America’s number one trading partner, Healy says. In fact, twice this year, import volumes for the Laredo, Texas port-of-entry surpassed those for Los Angeles County ports, the nation’s largest international gateway for inbound products, he notes.

It is still too soon to predict when port traffic will return to pre-recession levels, according to Byrd. But August and September should give a clearer picture of what to expect, as that’s when retail orders will likely start flowing with retailers gearing up for the holiday season. “In addition to port traffic, consumer sentiment and the unemployment rate will be watched closely,” Byrd says.