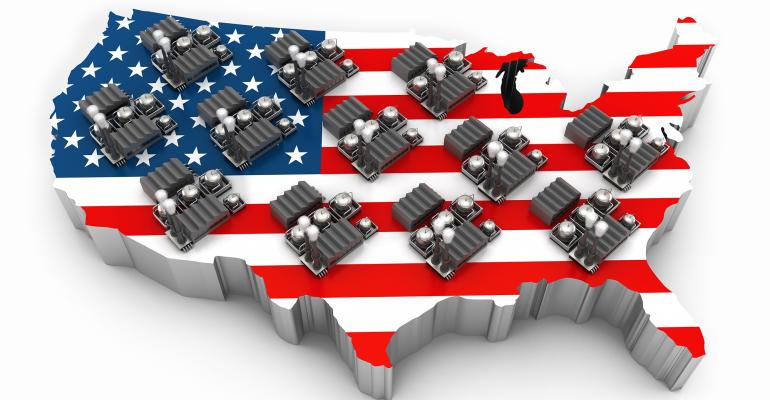 Supply chain disruptions are causing many companies to consider onshoring or nearshoring their manufacturing facilities.

While the COVID-19 pandemic has been a black cloud hanging over the U.S. for nearly two years, it’s also had some silver linings.

For one, the pandemic’s disruption of the global supply chain has triggered a renaissance in U.S. manufacturing, with many manufacturers expanding or onshoring production of high-value and essential products. This trend is bringing higher-paying jobs to many areas of the country, including communities that were economically devastated when factories closed during the push for offshoring decades ago.

According to a Thomasnet most recent annual survey of 709 manufacturers, as many as 83 percent of respondents said they are likely or extremely likely to reshore their production operations and are planning to add U.S suppliers to their supply chains. The ongoing reshoring trend is reflected in $204 billion in RFQ sourcing requests over the past 12 months, compared to only $69 billion in 2018.

The Biden Administration is openly supporting onshoring initiatives, proposing $600 billion in funding in its 2022 budget to support U.S.-based manufacturing jobs. And this was before China had reimposed lockdowns that are now vaster than the ones instituted when the pandemic began, with the potential to lead to what Fortune calls “supply chain chaos.”

The question is, what does all this mean for the U.S. industrial sector?

Today, e-commerce tenants tend to dominate demand for industrial real estate in the United States. But over the next few years acceleration in onshoring efforts will likely impact demand growth for industrial space as more U.S. businesses turn reshoring plans into reality.

Demand for U.S. manufacturing space was strong in 2021, with close to 40 million sq. ft. of positive net absorption for the year, more than double the 17 million sq. ft. absorbed in 2020 and the most since 2016, according to James Breeze, senior director and global head of industrial & logistics with real estate services firm CBRE. Year-to-date through the third quarter of 2021, 13 percent of total industrial absorption in Mexico was attributable to nearshoring, CBRE data shows. The firms forecasts that the companies most likely to engage in onshoring or nearshoring include automanufacturers, makers of medical supplies and pharmaceuticals and producers of semiconductors and other technology components.

A number of major companies have already announced plans to expand their U.S. manufacturing operations. For example, General Motors plans to spend more than $4 billion to expand its electric vehicle and battery production plant in Michigan, The New York Times reported. Toyota plans to establish a $1.3 billion battery plant in North Carolina and Samsung plans to invest $17 billion in a new semiconductor plant in Texas—its largest U.S. investment to date.

Reshoring activity is already creating competition among warehouse users for industrial space, as there is a significant overlap in properties that can serve both logistics and manufacturing needs, suggested a Phoenix Investors report. “Companies prefer to have distribution centers near the point of manufacturing to save money on transportation costs. Because of this, the local industrial markets will benefit from increased manufacturing activity,” says Breeze.

Demand for modern, class-A industrial space exploded with the onset of the pandemic, notes Fred Regnery, principal in the Chicago office of Colliers International and a leader in the firm’s national logistics and transportation group. With industrial vacancy close to zero in coastal markets, he expects an increase in industrial development in the Midwest, where there is more raw land for new development and a lower cost of doing business. According to a December report from commercial real estate services firm Savills, over the next five years, the move toward onshoring could result in 68 metro markets in the U.S. and Canada seeing the addition of 10 million sq. ft. or more of new industrial facilities. Cities in the Sunbelt and the Midwest that are close to rail and port facilities are the most likely to see this type of development, Savills forecasts. Savannah, Ga., for example, might see the addition of 53.6 million sq. ft. of industrial space between 2022 and 2026. Chicago could see up to 125 million sq. ft. in new industrial facilities.

Regnery suggests that local governments in secondary and tertiary markets that proactively invest in infrastructure such as roads and sewers to support automation requirements for modern manufacturing facilities will likely benefit the most from the wave in expansion and reshoring of manufacturing.

Today, some of the most popular markets for manufacturing expansion include Phoenix and Tucson, Ariz., Austin and San Antonio in Texas, Nashville and Memphis, Tenn. and Louisville, Ky., in addition to various markets in Georgia and South Carolina, notes Breeze.

“Looking for a manufacturing facility location today is similar to looking for a new distribution center,” he adds, noting that manufacturers want access to labor, reliable and affordable utilities, proximity to a major transportation hub and land to build on.

The Phoenix Investors report also noted that there is an opportunity for industrial investors to restore or redevelop manufacturing facilities in former urban manufacturing hubs that were abandoned when production moved offshore years ago.