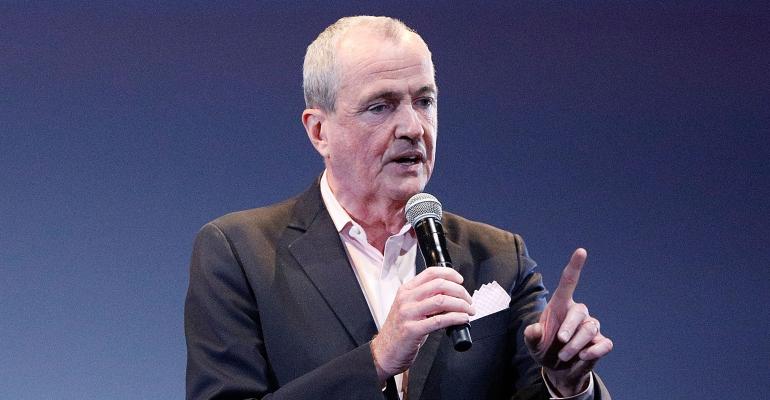 Governor Phil Murphy has until Monday to act on two bills that would bring him closer to legalizing pot.

(Bloomberg)—New Jersey’s long-delayed effort to legalize recreational marijuana has veered again into chaos, despite voter approval and a pause on pot prosecutions that has left some offenders in limbo.

Governor Phil Murphy has until Monday to act on two bills that would bring him closer to fulfilling a pledge he made more than three years ago to legalize pot. For months, he has been wrangling with fellow Democrats, who control the legislature, over language in the measures to address how law enforcement would treat people under 21 in possession of marijuana.

the initial step in a historic drive to immunize millions of people as deaths approach the 300,000 mark.

Lawmakers have pushed back previous deadlines on the matter, and the state missed the voter-approved Jan. 1 date to legalize. Murphy hasn’t commented on his plan for Monday. If he doesn’t veto the two marijuana bills, which passed the Senate and Assembly, they will become law. Alternatively, if lawmakers fear a Murphy veto, they could invoke a procedural rule to reset the clock on the due date for his consideration.

“It will be a colossal mistake if he doesn’t sign them,” said Senator Nick Scutari, a Democrat from Union, who has been pushing legalization for more than a decade. “The people of New Jersey have spoken.”

Murphy, a 63-year-old Democrat, hasn’t spoken extensively in public on the recent legislative back-and-forth. But failing to fulfill the voters’ decree could prove a liability in his bid for a second term in November.

“No comment for now,” Murphy spokesperson Alyana Alfaro said in an email Thursday. Murphy, though, has indicated that he was still unhappy with proposed legal penalties for those under 21. The Black caucus has argued that the policy would target minority youth in communities already hard hit by decades of drug prosecutions.

“We’re still trying to find our way to that point that we all want to get to, which is to get this done, to get it done the right way, that both protects our kids from the criminal justice system but also legalizes cannabis in the right, responsible way,” Murphy said at a Feb. 8 briefing.

Murphy’s effort to legalize pot dates to January 2018, when he took office. Pushback came from Republicans and some Democrats, citing a wide range of issues including distributor licensing, taxation, possession limits and expunging criminal records. The matter finally went to voters on Nov. 3 -- a step that supporters said would skirt the deadlock and lead to legalization far faster -- and 67% gave permission to amend the state constitution to allow for recreational cannabis sales. Medical pot has been legal in New Jersey since 2010.

New Jersey and three other U.S. states legalized recreational use during November’s election, bringing the total to 15. Neighbors New York, Connecticut and Pennsylvania are among those states expected to take up the issue this year. The process, though, goes well beyond approving a ballot. Governors and legislators must agree on rules, including how to tax the drug, who can sell it and how to deal with people currently in jail for pot offenses.

While New Jersey Attorney General Gurbir Grewal has ordered a pause on marijuana-related prosecutions, more than 6,000 charges are pending statewide since November, according to data from the state administrative office of the courts. Because legalization isn’t officially on the books, marijuana arrests have continued and offenders say they are stuck in a state of legal purgatory.

“‘Confident’ is not a word I would use” about charges ultimately being dismissed, said Carmine Vallani, a Point Pleasant-based attorney defending about 20 marijuana cases.

While Vallani awaits rules, he’s still filing for court adjournments and telling clients that he has no idea whether records could be expunged, let alone for how far back.

“It’s hard to give advice when everything changes on an overnight discussion among lawmakers,” he said. “We are hopeful, if you look at what other states have done.”

Among those facing recent charges is the marijuana activist Ed Forchion, who calls himself NJ Weedman. Forchion, an ex-felon who says he openly sells pot at his restaurant, NJ Weedman’s Joint in Trenton, has become a fixture around New Jersey, recognizable because of a surplus cop car he bought and turned into his rolling personal-brand billboard.

The so-called Weedmobile caught the eye of local police who stopped him earlier this month for a green license-plate bulb, what they called an equipment violation. The police confiscated under 50 grams of pot and $9,000 in cash and charged him and a companion with possession, a disorderly-persons offense, and conspiracy to distribute a controlled dangerous substance, a fourth-degree felony.

Forchion was released with a promise to appear in court. But even if the charges are dismissed, he says, the delays in legalizing pot leave him with little confidence that small operators like him will be able to benefit from new state marijuana laws anytime soon.

Regulations will take about a year to put into place after legislation is signed, and distribution will be limited to 37 corporate licensees initially. Sometime after the first 24 months they could be joined by small operators like Forchion, but there are no time-line commitments.

“They made all these promises -- micro licenses, they were going to give some to minorities,” he said in an interview. “They still won’t get to the guys like me, the guys who went to prison for it.”