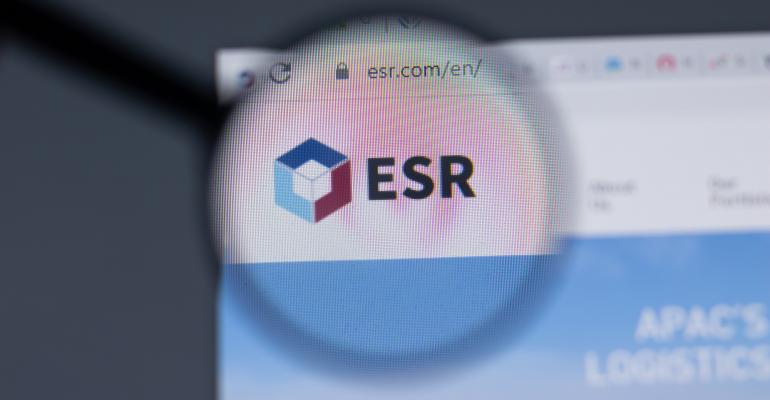 ESR Cayman Ltd. has been on a deal-making spree for two years and could eventually compete with the likes of Blackstone and Brookfield.

(Bloomberg)—Can a five-year-old Hong Kong-based property manager grow to take on the likes of Blackstone Inc. and Brookfield Asset Management Inc.? That’s the question capturing the attention of some analysts for ESR Cayman Ltd.

The landlord of e-commerce logistics hubs has been on a dealmaking spree for two years, most recently the acquisition of a much larger competitor ARA Asset Management Ltd. for $5.2 billion. And more is likely to come.

The company plans to speed up investments in India and Southeast Asian countries where e-commerce still accounts for a tiny fraction of retail sales, Chairman Jeffrey Perlman, 38, said in an interview. The proportion of assets invested across China, South Korea, Japan and Australia will fall slightly while remaining key markets, he said.

“These other countries are expecting e-commerce sales to triple over the next five years against markets like China which have already witnessed the outsized growth cycle,” Perlman said.

The landlord to internet giants like JD.com Inc. and Amazon.com Inc. is walking a tightrope: grow too slowly and risk being left behind, grow too fast and financing costs may quickly spiral. Shares sank as much as 19% in the weeks following the announcement of the ARA acquisition last month. The stock has since pared some of those losses and is currently trading at close to the six-month volume-weighted average price.

While all analysts surveyed by Bloomberg have a buy or outperform rating on the stock, ESR’s rapid growth “raises concerns about whether it can maintain a high performance in the future,” Patrick Pun, an analyst at Wellchamp Capital Ltd., said in an interview. Both Pun and analysts at CICC said the ARA acquisition has weighed on the company’s shares. The latter suggested investors take a “neutral approach” to the deal in a note last month.

ESR is pressing ahead with billions of acquisitions and investments at a time when demand for traditional office space plunges with the global pandemic. The company plans to double its logistics and data center assets to more than $100 billion in the next several years, a person with knowledge of the matter said, asking not to be identified discussing private information.

Before ARA, ESR partnered with GIC Pte. to buy a portfolio of warehouse and logistics assets in Australia from Blackstone Group for about A$3.8 billion ($2.8 billion) in April.

The company expects India and Southeast Asia to make up 30% of the portfolio in future, compared to around 20% currently, Perlman added.

And he’s looking at divesting one or two non-core assets from the ARA transaction that don’t fit with the longer-term strategy. The ARA deal is set to triple assets under management to make ESR the third-largest listed real estate manager globally.

“This highly strategic logistics footprint that sits at the heart of the central nervous system of all the major e-commerce companies will only continue to grow in value over time,” he said. “More warehouses will need to get developed further and further from the city centers given the limited availability of land.”

Debt has been piling up with a total of $3.2 billion outstanding in loans, bonds and other credit facilities, according to Bloomberg Data. HSBC Holdings Plc, BNP Paribas SA, Bank of China Ltd., Standard Chartered Plc, and around a dozen other banks mostly across Asia-Pacific are lenders to ESR.

ESR’s financing costs are much higher than those of peers. The cost of borrowing stood at 3.9% as of June, compared with 0.54% for Goodman Group or 1.8% for Prologis Inc., according to data compiled by Bloomberg. That’s due to the mature growth profiles and superior credit rating at those rivals, according to Mohsen Crofts, an analyst from Bloomberg Intelligence.

The company’s net debt to assets was 30.6% at the end of June compared with 28.6% a year ago, according to ESR. Its weighted average interest cost declined to 4.6% from 5% in the same period.

Borrowing expenses will come down further, since ARA is able to obtain loans at less than 2% on an unsecured basis, Perlman said. And while ESR typically provides 10% to 15% of the capital for its funds, ARA and its subsidiaries historically added less than 5%. Over time, that will enable ESR to borrow less for investments in real estate funds, Perlman said.

To be sure, a deep slowdown in e-commerce sales and rising competition in the property third-party fund management space are among the risks the company could face, according to a note from Goldman Sachs dated Sept. 21.

But over the next five years, the cost of debt financing for logistics assets - barring a rise in interest rates - will reduce further, Perlman said.

“Most banks are highly under-exposed to new economy or logistics real estate,” he said.