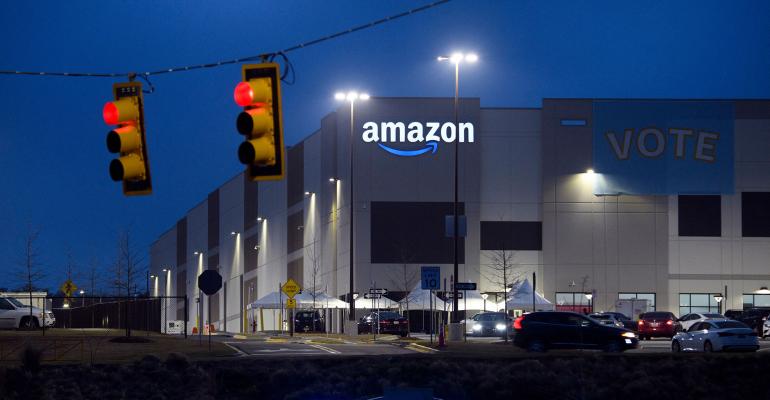 Hanging over the election was the fear that joining the RWDSU would prompt Amazon to shutter the facility.

(Bloomberg) -- The historic union election at an Amazon.com Inc. fulfillment center in Alabama concludes on Monday, setting in motion a vote count that organizers expect will be contentious and take a few days.

As many as 5,800 workers at the facility in Bessemer were eligible to vote to join the Retail Wholesale and Department Store Union. The hard-fought mail-in election that began seven weeks ago attracted national attention -- President Joe Biden even weighed in -- and saw the union and Amazon engage in a sometimes testy information war.

Both sides have a lot to lose. If the RWDSU prevails, the unionizing drive could spread to other Amazon facilities, some of which are already seeing stirrings of labor activism. A loss for the RWDSU would be a major setback for the U.S. labor movement, which has been in decline for decades.

Opinions at the warehouse in Bessemer have been sharply divided between workers who believe union representation will help them secure less demanding working conditions and those who are happy with a $15 an hour starting wage and health benefits. Hanging over the election was the fear that joining the RWDSU would prompt Amazon to shutter the facility, as it has done elsewhere before.

The vote-counting process will start at 10 a.m. eastern on Tuesday in a private session, presided over by the National Labor Relations Board. Amazon and the union will have the opportunity first to review sealed individual ballots and object to such things as whether an employee’s job classification entitles them to vote, problems with a signature or a ripped envelope.

Eligibility to vote could be an especially contentious issue because turnover is high at Amazon warehouses, and there have been reports that some workers in Bessemer received ballots after they had left the company. The election was open to people in most job categories who were on staff during the Jan. 9 payroll period, a time when the company is typically axing tens of thousands of workers hired to handle the holiday shopping rush.

Contested ballots will be set aside and reviewed later only in the event there are enough of them to swing the outcome of the election.

One the review process is complete, NLRB officials will begin counting the stack of uncontested ballots in a process open to reporters watching via Zoom. The ballots themselves don’t provide much to quibble about: a yes or no box to be filled in. With the NLRB committed to counting during business hours each weekday, the timing of the final tally is unknown.

If the winning margin is smaller than the count of challenged ballots, the NLRB will hold a hearing to adjudicate the disputed votes and add those deemed to be completed correctly to the result.

The Amazon fulfillment center -- the company’s first in Alabama -- opened exactly one year ago to a mostly positive reception in a city still recovering from the hollowing out of its manufacturing base. Still, some workers found the work arduous or fretted about catching Covid-19, which had started spreading around the U.S. and infected dozens of Amazon workers elsewhere.

A Bessemer employee contacted the union, the labor board greenlighted the election, and the battle was on.