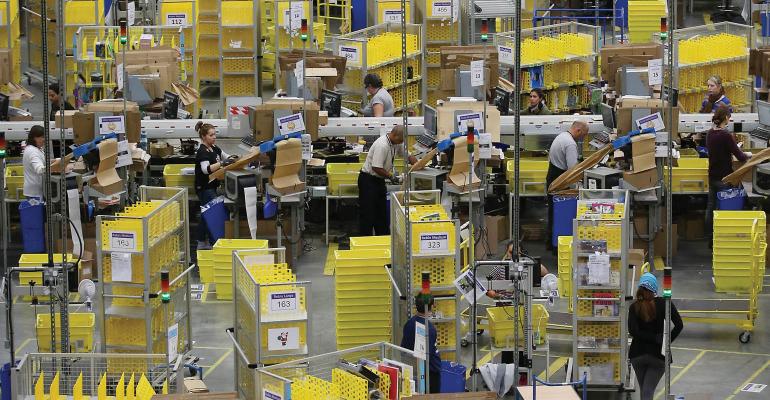 There’s little dimming the outlook for the industrial sector, according to our latest study on the sector.

Neither ongoing international trade disputes, nor the warning signs of a potential recession, nor the uncertainty that’s emanating from a particularly fraught U.S. presidential election year are enough to dim the enthusiasm for the industrial real estate sector, according to the findings in NREI’s sixth annual study.

In our 2019 survey, sentiment was also strong for industrial fundamentals across the board, but there were some signs of trepidation, with bullishness on many metrics a tick below where it had been in previous years. This year that sense of caution has evaporated. The unexpected shift to an economic climate with falling interest rates has served as a boost to all commercial real estate sectors and industrial is no exception to that trend.

One respondent wrote, “The momentum that has happened fuels even further expansion. The sight of a completed project stimulates the vision of more.” Another described the industrial sector’s conditions as “markets are not overbuilt, capital is available, the fundamentals of the overall economy are still strong and the retail shift to efficient delivery model is still in early stages.”

One relative gauge of readers’ comfort with the sector is that a majority of respondents said they think the current expansion cycle will last another 13 to 24 months or longer. In all, 57.8 percent of respondents answered “13 to 24 months” (40.0 percent) or “longer than two years” (17.8 percent). Last year, the combined figure for those responses was 44 percent. To put that another way, despite 12 months having passed, industry participants see a longer runway ahead for the industrial sector today than they did a year ago.

At the other end, a small minority (7.0 percent) said the “expansion phase has already ended.” In our 2019 survey that number was 12.0 percent.

One major change from last year’s survey is that we’ve gone from a rising interest rate environment to one where the Fed has now been steadily reducing rates. As a result, expectations on cap rates have shifted considerably from past surveys. In most previous years, a majority or plurality of respondents expected cap rates in the sector to rise and another chunk of respondents expected cap rates to remain flat. Generally, fewer than 20 percent of respondents have predicted lower cap rates. This year, however, the numbers have shifted. Only 26 percent of respondents this year expect cap rates to rise in the next 12 months—the lowest figure we’ve recorded in the six years of the survey. A plurality (47 percent) expect stability. Meanwhile, 28 percent expect cap rates to decrease—the largest figure we’ve seen since the 2015 survey.

The finance and investment picture

A respondent added, “There are still several years to go in the double-digit growth rate of e-commerce, there has not been overdevelopment in most markets, and there is an overabundance of debt and equity capital interested in this sector.”

As for the macro factors that impact capital markets, the only significant change, unsurprisingly, pertains to interest rate expectations. A year ago, nearly four-fifths (79 percent) expected further interest rate increases, while only 1 percent said they expected rates to decrease. It turns out the 1 percenters were correct. This year, 62 percent see interest rates staying flat. About one-quarter (23 percent) see further decreases ahead and now just 15 percent expect interest rates to tick back up in the next 12 months.

For the other factors, the numbers were fairly consistent, with between three-fifths and two-thirds of respondents seeing loan-to-value ratios (68 percent), debt service coverage ratios (67 percent) and the risk premium (62 percent) all remaining stable in the year ahead.

When it comes  to investment activity, respondents have shifted to more of a “hold” mentality (58.3 percent this year, up from 46.8 percent in 2019). About one-third (32.2 percent) said they plan to buy—which is down just slightly from a year ago (35.4 percent). The real movement came on the sell side, where just 9.4 percent said they plan to sell industrial properties in the next year—a level nearly half of what it was a year ago (17.7 percent) and the lowest in the four years we’ve asked this question.

Respondents had some thoughts as to where that activity will occur. There’s been a growing preference for “last-mile” warehouse and distribution facilities. This year, 53.4 percent said they think that sub-sector will be in most demand, representing 17.4 percentage points of growth in the past two years.

As one respondent described it, “There is still such a strong demand for industrial and distribution, in particular for last-mile space, given how much consumers are spending on e-commerce. Retailers need to get their products out quickly.”

Despite industrial real estate’s long bull run and a robust pipeline that delivered more than 330 million sq. ft. of new space in 2019 in North America and is projected to deliver more than 300 million sq. ft. of space this year, according to figures from Cushman & Wakefield, respondents largely remain unconcerned about the potential for overdevelopment.

For its part, Cushman & Wakefield said that deliveries did outpace net absorption in 2019 and that is likely to occur again in 2020 and 2021. The net result is the vacancy rate for industrial properties in North America will likely tick up from current levels of 4.6 percent to about 5.2 percent in the next two years.

“This sector does not have approved projects that match the demand being created by growth in several important sectors: biotech; technology; warehousing,” one respondent wrote in. “The absorption rates will continue to be strong and expansion will continue in the sector.”

As in past years, we continued to gauge how the conversion of old industrial boxes into other uses is affecting industrial real estate fundamentals.

Overall, 57.6 percent of respondents said that this activity is taking place in their markets—the lowest level in the six years we’ve been asking the question. (The figure previously had hovered between 64 percent and 70 percent in all the years we’ve conducted the survey.)

Respondents are also seeing these conversions having less effect on the market. In the past, surveys indicated that this activity was leading to lower total inventory in the industrial space. The number peaked at 53 percent in 2015, but has fallen to a new low of 23.9 percent in this year’s survey. Now, a clear majority says these conversions are either being balanced by new construction (46.8 percent) or that new construction is outpacing the loss of space to conversions (29.4 percent). Both those figures represent new highs.

On one other fundamental—rents—respondents’ expectations remained virtually identical with levels from past years.

The majority of respondents (approximately 78 percent) said they expect rents to rise in their region in the next 12 months. (The figure has been around 80 percent in all six surveys.) A mere 3 percent said they think rents will decline. That level has never topped 4 percent in any of our studies. Meanwhile, 18 percent said rents will be flat—down some from the 22 percent who answered that way in 2019.

Lastly, respondents were asked to rank the relative strength of their regions. The results were similar to past years (on a scale of 1 to 10)—with the West (8.2) and the South (8.2) continuing to top the East (7.8) and Midwest (7.2). The numbers for all four regions were within 20 basis points of the figures from last year’s survey.

Survey methodology: The NREI research report on the industrial real estate sector was completed via online surveys distributed to readers of National Real Estate Investor in January 2020. The survey yielded 207 responses. Recipients were asked what regions they operated in (and were allowed to select multiple regions). Overall, 46.9 percent said they operated in the South, followed by the West (45.3 percent), East (44.8 percent) and Midwest (32.8 percent). Approximately half of respondents are investors and developers. About half of respondents (41.7 percent) hold the titles of owner, partner, president, chairman, CEO or CFO.