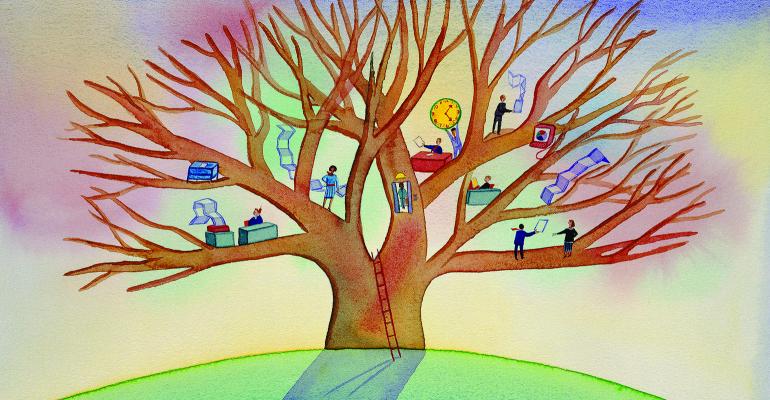 The New Face of the Super OSJ

In the late 1990s, Pete Bush was working for Cetera Advisors under an office of supervisory jurisdiction (OSJ), as was most every other independent rep paying for the privilege of having a supervisor. These offices were mandated by FINRA to more effectively distribute the oversight of an independent broker/dealer’s scattered network of affiliated reps.

Bush and a few others from the firm eventually decided it made sense to start their own OSJ; it remained small, just three partners and six advisors, and stayed that way until 2011. But to Bush it still felt like more like a burden than an efficient way to share back-office functions and compliance mandates.

“I was questioning the sanity and the financial viability of being a Super OSJ,” Bush says. But soon after, a partner at Cetera gave him some prescient advice: “Get big as fast as you can,” he said. “Then it becomes profitable. And then other opportunities develop.”

Bush attributes the growth to the evolution of the OSJ model itself. Historically, Super OSJs provided office space and supervised reps, handled their licensing and registration, acted as a go-between with the brokerage and filed away the compliance reports—all the dry, boring bureaucratic stuff that most independent reps shunned.

But those jobs are now mere table stakes; the best Super OSJs have morphed over the years into full-service practice management powerhouses, providing innovative marketing support, professional business consultants and powerful recruiting and transition programs for breakaway advisors—or retiring ones looking to sell their practice and offload their clients.

“The OSJs whose value proposition is based solely on supervision, or offering a space, that’s an anachronism,” says Bill Morrissey, managing director of LPL Financial’s Independent Advisor Services unit. “The most successful large enterprises provide that sense of community; they help their advisors do a better job,” he says. “The two things that most advisors willingly pay a premium for is increased efficiency, increased productivity and help growing their business.”

Super OSJs on the Rise

Though the model has been around for decades, Super OSJs are getting a boost from the fact that it’s getting harder for smaller independent brokers to sustain viable businesses. The model is changing, fees are under pressure and regulatory expenses are a margin killer. Bush says the compliance requirements have increased 10-fold since the late 1990s.

“I think it's only going to escalate in the next three-to-seven years,” says Steve Dudash, president of IHT Wealth Management, a Super OSJ under LPL with about $650 million in total client assets. Smaller shops will need even more than the economies of scale a Super OSJ can provide, “because if nothing else, it’s the regulatory environment we live in.”

Jonathan Henschen, president of the recruiting firm Henschen & Associates in Marine on St. Croix, Minn., says the selling point for the Super OSJs is that they are largely self-sufficient and don’t rely on the reputation or the business services of the broker/dealer. In some cases, having a professional distance from a brokerage firm surrounded by negative headlines is a comfort; in other cases, the Super OSJ provides a professional oasis inside a lumbering bureaucratic machine slow to respond to advisor needs.

“The broker/dealer’s removed from the initial point of the value creation chain, which happens across a conference table with a client,” Horizon’s Bush says, citing a Horizon program that brings into the fold retiring CPAs who have an investment advisory business and are looking to transition their clients.

“The flexibility on the service models is important because it allows that particular advisor to morph through our system where, ultimately, we would be a buyer,” Bush says.

Many Super OSJs offer marketing support that is more effective than a national advertising campaign or boxes full of glossy brochures and branded collateral. OSJ marketing teams will often create opportunities for advisors on their home turf.

That kind of on-the-ground effort is one reason the Private Advisor Group (PAG) brought on Abby Salameh as chief marketing officer in August 2013. An OSJ of LPL, the firm has 550 advisors, $18 billion in total RIA and brokerage assets, and 12 full-time compliance staff.

Last year, the firm launched a program that helps advisors identify others in their geographic area who are retiring and whose clients will be in need of new homes.

PAG contacts them with direct mail campaigns and invites them to educational events with succession planning specialists. For many independent advisors at retirement age, it can be more effective to proactively put concrete options directly in front of them instead of waiting for them to respond to a more ambiguous solicitation. Salameh piloted the program with five PAG advisors; each acquired at least one practice during the course of the year.

PAG also partners with ActiFi, a consulting firm, to help advisors comb their current client base for additional business, and holds a two-day educational conference for all members and a more exclusive event for the top offices. This year, Gladstone Analytics will evaluate multiple facets of each PAG’s top practices to identify, and improve, weak spots in the business.

Supporters say these kind of large, full-service super OSJs will become even more attractive to brokers after the Department of Labor’s fiduciary rule kicks in, as seems likely; even if the details aren’t yet clear, few think the additional regulatory hoops will leave smaller practices unscathed.

“There are still an awful lot of these smaller firms, 10-person-and-under shops, and I just can’t imagine how they are going to make a go of it,” Henschen says. “All these tiny b/ds are going to throw in the towel simply because supervision is becoming increasingly expensive, and a smaller firm can’t afford it.”