The tougher realities facing financial advisors four years after the crash are taking a toll, new data from Cerulli Associates shows. The total number of advisors across all channels dropped 2.3 percent last year to 316,000, with the independent broker/dealer space bearing the brunt of the fall.

IBD advisor headcount fell 13.9 percent to 79,800 last year, bigger than after the 2008 crash. (The drop was lower when dually registered advisors are factored into the math but it’s still steep--a 10.7 percent decline.) In comparison, the only other channel that saw advisor numbers fall last year was in the regional b/d space, which was off 2.9 percent.

Some of the departures are migration between channels, Cerulli Senior Analyst Tyler Cloherty said. For example, the registered investment advisor channel grew 2.9 percent to 15,800 (or 6.9 percent when dually registered are included.)

But struggling advisors in IBD are a key part of why their numbers are off so sharply; Cloherty said average assets among IBD advisors who left last year was a mere $8 million.

“To run your own business and put food on the table, that’s just not going to do it,” he says. “The advisor population is really a lagging indicator of the health of the industry. The recession happened but everyone still hung in, they thought they could piece it together. Once you get out a couple of years, people are thinking that the career isn’t going to work out for them.

“We were surprised as well how much it caught up, just specifically within that IBD channel. But when you look at it, they have really low assets. [Cerulli estimates average IBD assets at $20.5 million.] They’re getting chipped away from the dually registered and the RIA, so there’s a lot of secular trends going against them right now,” he says. “I think ultimately separating the wheat from the chaff is going to be healthy for that channel because there’s too many low-end producers.”

Larry Papike, president of Cross-Search, a recruiting firm for the IBD space, says demand for advisors is down this year. Some low-producing advisors are scrambling.

“I’ve gotten a lot of calls in the last six months from people I wouldn’t even place, just simply because they’re weren’t doing that much business,” Papike says. “I got one today, the guy was just looking to slow down his practice. He was 62 years old and wasn’t looking to bring on new assets. What happens in

a case like that is, your clients get old, die, move away, and if you’re not rebuilding it, your numbers continue to go down.

“I couldn’t recommend a broker/dealer for him.”

Broker/dealers typically cull their lowest producers at the end of each year; Papike says rising costs are likely to increase pressure one low-asset advisors. Rising FINRA fees will be one expense; advisors also are seeing their errors and omissions insurance premiums rise as well, a consequence of the recent hit that carriers took on the private placement failures such as Provident Royalties and Medical Capital. 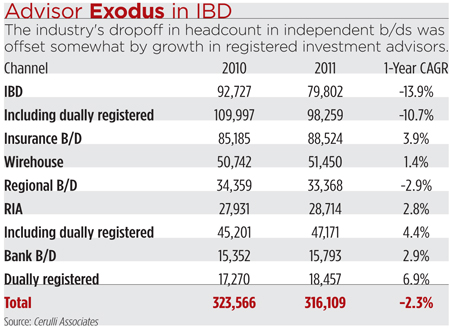 “If your revenues are going down and your costs are going up and you’re not bringing in new people, that’s going to cause people to go out of business,” Papike says.

Asset share is also changing within channels, Cerulli says. Wirehouses, which held 41.1 percent of share at the end of last year, will drop to 34.2 percent by the end of 2014. IBD share will fall from 14.1 percent to 12.6 percent. RIAs and regional b/ds are the biggest beneficiaries of the trend; the former will see share move from 12.2 percent to 14.4 percent, Cerulli predicted, while regional share will grow from 15.8 percent to 19.3 percent.

Recruiter Danny Sarch of Leitner Sarch Consultants in White Plains, N.Y., said tougher times can force lower performing advisors out of the market. But he added that it may be difficult to assess advisor movement trends; estimates of drops in advisor headcounts may be skewed, for example, by departures of staff who don’t work with clients but who hold a Series 7 license.

“I don’t think there’s any way to differentiate, because firms don’t,” he said. “They all play with the numbers.”

Many people in the industry expected that business would be better than what they have seen, anticipating that the retirement of baby boomers would provide asset flow from account rollovers, Cloherty says. But boomers are working longer because their portfolios took hits after the crash.

The drop in advisor headcount is “obviously not a good sign, but I don’t think people are that shocked,” cloherty says. “In the asset figures, it’s zero percent growth over four years. It’s hard to get asset growth. It’s hard to get clients. I think people have a relatively negative outlook toward financial firms. It’s just a tough time to be an advisor.”