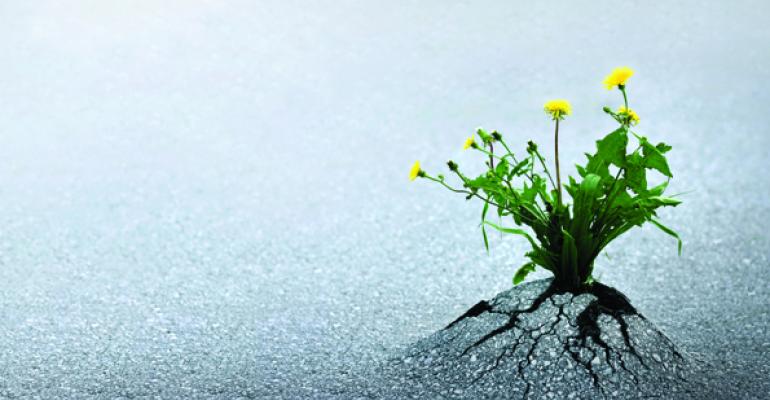 It’s orthodoxy that small IBDs won’t be able to stay in business given the unprecedented increase in regulatory and technology costs. Yet some tiny firms are bucking the trend. Here’s how they’re doing it.

These days, broker/dealers are facing more challenges than ever. Let’s see. You’ve got your increased regulatory scrutiny from FINRA and the SEC; the fight for talent has never been more difficult; and profit margins, never fat in the independent b/d space, are under pressure.

Not to sound hysterical, but many are questioning the sustainability of the small independent broker/dealer model. Will the small IBD have to mate (to achieve scale) or otherwise die? In a recent online poll conducted by WealthManagement.com, 62.5 percent of respondents (125) said the IBD business is not sustainable, compared to 37.5 percent (75) who said it was. (WealthManagement.com is REP. magazine’s website in partnership with Trusts & Estates magazine, also owned by REP.’s parent company, Penton Media.)

Remember: This year was supposed to be a landmark year in “breakaway broker” volume as the golden handcuffs began to loosen at the wirehouses. But recruiters say that movement has not materialized as people had expected.

Those FAs who are going independent are heading to large firms, such as LPL Financial, Raymond James Financial Services, or Wells Fargo Advisors Financial Network; those firms have the size, scale, and resources to be profitable, attract reps, and handle compliance burdens. (LPL has more FAs than the wirehouses—but, of course, not the assets, not by a long shot; see table on page s24.) 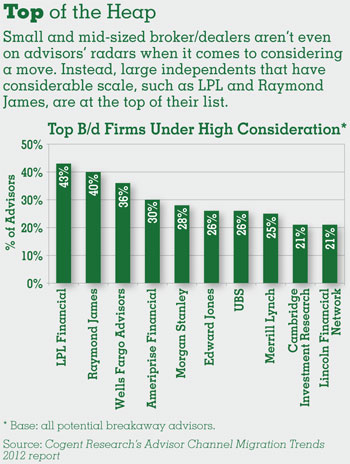 Meanwhile, small and mid-sized firms (those with fewer than 500 advisors) are left in the dust, with many closing up shop or consolidating with other players. Some people have decided it isn’t even worth it to open up a new broker/dealer at all. In fact, the number of new b/d admissions in 2012 has dropped by about 45 percent from 2011, according to a recent study by The Compliance Department, a Centennial, Colo.-based firm that provides compliance outsourcing services to b/ds and investment advisors.

“Based on the information, the smaller firms are the ones that are really getting hit hard,” says David Alsup, director of business development at The Compliance Department.

That said, many small and mid-sized firms are bucking the trend, profiting and attracting FAs despite the looming challenges of increased regulatory and compliance costs and the technology arms race. They’re doing it by focusing on the quality of FAs they bring on, rather than quantity. Those firms focus on offering high-touch, personalized customer service (customers being their advisors); cut costs where they can; and take steps to avoid compliance mistakes.

Troy, Mich.-based Concorde Investment Services is one small firm that is growing at a nice clip. (Given its size, it’s no wonder.) Since getting FINRA approval to become a b/d in August 2010, the firm has grown to about 100 FAs. Last year, the firm did $3 million in GDC, and it’s on track to reach $9 million this year, says Jason Kavanaugh, president and CEO. The firm currently has double-digit gross margins, but Kavanaugh declined to provide specifics.

Concorde is not interested in taking on just anybody with an income and revenue; they’re looking for reps who aren’t going to jeopardize the organization long term, Kavanaugh says. Since the firm doesn’t advertise or send out mailings, most of the firm’s brokers can be traced back to referrals or endorsements from a third party.

SCF Securities, based in Fresno, Calif., intends to cap off the number of FAs it will work with at around 500. SCF has about 140 advisors. Randy Meadows, president and CEO, says he probably rejects more advisors than his team tries to capture.

In the last 15 months, SCF has grown from about $200 million-plus in assets under management to between $700 million to $800 million.

What, is Meadows crazy—capping off the number of independent contractors in an industry where scale is so important to profitability? “A lot of firms will just B.S. the rep and try to get them to come on board no matter what, and then the rep has a bad experience,” Meadows says. “I don’t want the bad experience to go out there and become negative advertising because that’ll become a bigger hindrance than if we do it the right way.”

Williams Financial Group, of Dallas, has grown its revenue by about 20 percent per year for the last couple years, but its rep count has remained steady at about 300. The firm made a decision to go after more sophisticated, higher-producing reps; meanwhile, it has culled out the lower producers, says Wilson Williams, chairman and CEO. To come on board, advisors must have a minimum annual production of $250,000, but the ideal advisor on the platform will have between $500,000 to $1 million in production. Williams’ profit margins are not currently on the plus side, as the firm has been reinvesting its profits to build up systems and upgrade its staffing. But Williams expects margins to reach 4 to 8 percent in the next year or two.

Because smaller firms don’t have the scale or the resources, they just can’t compete with the behemoths of the industry on price.

“If you’re just trying to be the highest payout on the street, you’re never going to do it as a small broker/dealer,” says Stuart Silverman, chairman emeritus, Fusion Advisor Network. “You don’t have the margins to do it. Sell value, not price.”

SCF’s Meadows says his firm does not offer up-front cash, which is typically paid to brokers to offset the loss of business they experience when changing firms. Instead, SCF handles all the transition paperwork for the rep, and within two months of moving, almost all of their clients—and their recurring revenue—have stayed with their advisors.

“What we found is that a lot of advisors don’t look for the up-front cash, just for the money’s sake,” Meadows says. “They’re looking for a relationship. They’re tired of being with the firm that has over 1,000 reps, where they get lost in the mix, they get very little personal service, if any, and they’re treated like an asset or a liability depending on the day and the compliance department’s attitude at any moment in time.”

“If you have a value proposition that’s tangible, that advisors can touch and feel and feel good about, then price doesn’t become the number one priority,” says Adam Antoniades, president and CEO of First Allied, a San Diego, Calif.-based IBD with about 850 producers. “Access to the resources, the services—that becomes the number one priority. For many small firms, the value proposition is the intimacy and culture that they bring to the table.”

Dallas-based Prospera Financial Services has also tried to pitch its boutique, relationship-based culture to prospective advisors. As a small firm, with about 120 advisors and over $30 million in annual revenue, advisors are going to get more of a connection to senior management, says President David Stringer. Their sweet spot is advisors with north of $300,000 in annual production. The firm’s net operating income—after paying its brokers and bills—is at about 8 percent of total revenue. But a portion of that goes to pay bonuses and compensation of the employees, which is variable—meaning it’s discretionary to the performance of the firm. After that, the firm has about 2 percent left over to reinvest in the firm, Stringer says.

First Financial Equity, headquartered in Scottsdale, Ariz., doesn’t do up-front deals either. Most of the firm’s 160 reps are employees, but there is an option to be an independent contractor. Executive Vice President Robert Spicer, who runs the 45-rep Denver branch, says the firm wanted to offer similar support to a wirehouse, such as providing rent, office space, desks, paper, errors and omissions insurance, and benefits. At the same time, reps are getting a competitive payout of about 75 percent.

When Fusion’s Silverman was thinking about launching a broker/dealer a few years ago, he looked around at how other b/ds were running their businesses. While he ultimately decided to sell Fusion to NFP Advisor Services Group, a large IBD, Silverman was surprised at the amount of debt the smaller b/ds were taking on.

“In a marketplace like this, cash is king; it gives you the security to weather storms, to weather volatility, to weather the ups and downs,” Silverman says. “The fact is, they should be doing what they teach their advisors to do, which is grow sound, as much as possible, keep it as risk-free as possible, businesses that are financially-viable, and profitable, and try to keep the debt down.”

Some firms are doing that.

First Financial is not levered; they pay cash as they go, Spicer says. Meadows says SCF doesn’t borrow, but lives off its revenue. At the end of the fiscal year, most firms will bonus out most of their excess capital to management, drawing it down to the minimum, Meadows says. In contrast, SCF doesn’t do that; instead it reinvests that capital back into the firm.

So for tiny IBDs, it’s all about costs (using automated back offices, third-party services, for example). But one of the biggest costs (and among the hardest to control) for a small firm these days is compliance. In the last couple years, FINRA has increased supervision requirements, resulting in an increase in b/d back-office compliance expenses by about 25 to 30 percent, says Jonathan Henschen, president of the recruiting firm Henschen & Associates.

One way to keep compliance costs down is to keep it simple, avoid mistakes. First Financial, for example, doesn’t allow its reps to do any private placements, regulation D offerings, invest in hedge funds or other types of esoteric investments. Fancy alternative products have landed many small and larger b/ds in hot water in recent years.

Another way is to hire independent auditors and hire third-party compliance consultants and legal firms, as Concorde has done.

“For as long as regulators think that you can catch a bad guy, a cheat, through process, [the costs of compliance] will continue to rise,” says First Allied’s Antoniades. “The reality is cheats don’t follow process. They cheat anyway, by definition.”