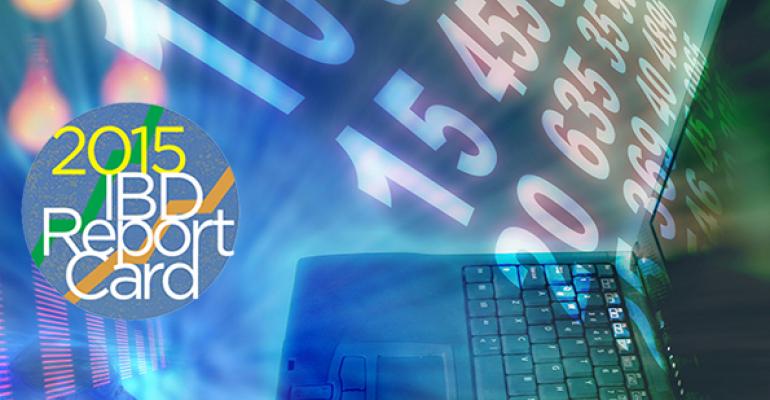 As technology becomes more nimble, commoditized and cloud-based, smaller firms seem to have gained an edge when it comes to serving their advisors.

Smaller brokerages traditionally have lagged behind larger firms when it came to technology. No more. As databases and web platforms become more nimble, commoditized and cloud-based, smaller firms now appear to have an edge, according to REP.’s most recent Independent Broker/Dealer Report Card.

Overall, most advisors praise their firms when it comes to technology, and satisfaction again increased this year, albeit slighty, to 8.9 (with 10 being “outstanding”) from 8.7.

But as with overall satisfaction, those at smaller shops gave a noticeably higher average score of 9.1, compared to larger firms’ 8.6.

While that’s a marginal difference, the survey makes clear that technology support is important when it comes to an advisor’s decision to stay. Twenty-seven percent of advisors named technology as a reason they left their previous b/d. At larger firms, 36 percent said it was the reason they left their previous affiliation. Advisors from big and small firms ranked technology as the third-most-important factor in looking for a new b/d, behind service and support. 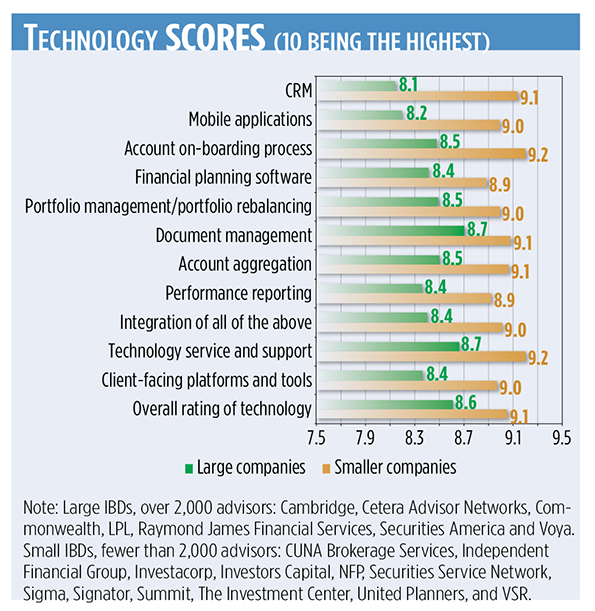 Ten years ago, the biggest IBDs enjoyed a clear advantage in technology, but the FinTech boom has leveled the playing field by providing smaller firms with access to high tech at a low cost.

“Larger firms have a much wider array of opinions and feelings” about technology, says Blane Warrene, co-founder of QuonWarrene and a technology consultant to financial services companies. “Pivoting can be done, but it’s like turning a battleship; you have to notify 500 people. You can’t just whip the wheel like it’s a speedboat.”

The large firms are slower by necessity, as a misstep can be much more damaging and there are, by nature, more stakeholders to be consulted and satisfied. But implementing technology is often a race against the clock.

“Tech is changing so fast,” says Tim Welsh, the president of Nexus Strategy. “Think of deploying a robo-platform over thousands of advisors. It would take a monstrous effort and by the time you do it, it’s already outdated.”

Another difficulty is the need to create platforms that suit the needs of thousands of advisors at a large brokerage, with varying client models and expectations for what the technology should do, instead of just a few hundred at a smaller shop. A system designed to operate across business models will be inherently more complex, so technology teams have to limit customization and flexibility.

“It’s a real challenge if you’re the IT director of a big b/d, because you have so many advisors to keep track of and supply tools to that you really do have to manage to the lower common denominator,” Welsh says. “When you do that, you take functionality out.”

The biggest criticisms from advisors at large firms were with customer relationship management and mobile applications, which had the lowest ratings at 8.1 and 8.2, respectively.

Nicole Newlin, a practice management consultant and partner at Pathfinder Strategic Solutions, says that a lot of the dissatisfaction stems from a lack of support for advisors transitioning to new technology. They are bounced between the help desks at the b/d and the various tech vendors the b/d has partnered with. Newlin says that smaller firms benefit by not trying to be all things to all people.

“Smaller b/ds tend to commit to one solution and understand it from A to Z and try to help with the transition,” Newlin says. “Or they don’t do it. They give the best reporting tools, the best analytics, [but] they don’t get into the CRM game.”

The good news for larger firms is that overall satisfaction has improved. They also have more resources to acquire new technology, build their own proprietary products, and improve existing solutions. Warrene says that when it comes to commoditized stuff like email and infrastructure, the large firms can afford top-tier solutions and often get access to tools that the smaller companies haven’t even heard of.

The lower ratings may be tied to the law of averages, as a greater number of advisors are going to create more variance with satisfaction. Welsh added that dissatisfaction at large IBDs could be the result of the old “grass is always greener” phenomenon.

“Everyone assumes that the latest and greatest is out there,” Welsh says. “Technology moves so fast, everyone wants the new thing, so they’ll always assume that what they have is a step behind.”

Next: Pay and Compensation