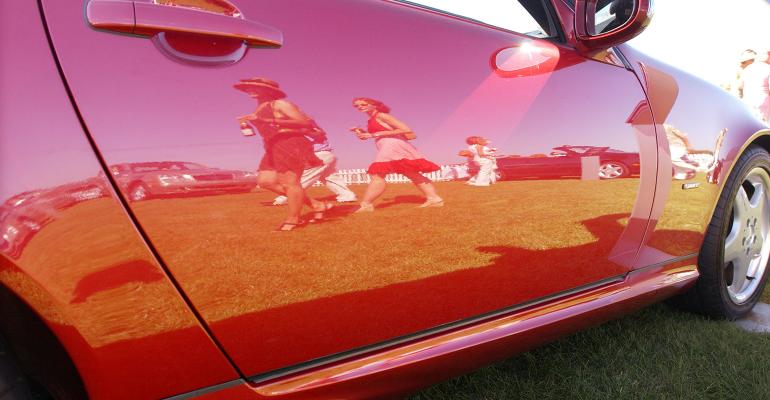 'Who Are These People?': the Identity Crisis of the Ultra-Rich

There have never been more billionaires. So what does it mean to be one?

(Bloomberg Markets) --A denizen of an elite charity ball in New York found himself disoriented one night, not by the rapid fire of flashbulbs around Victoria Beckham or by the glittering night sky projected on the walls, but by the absence of his usual crowd.

“Who are these people?” he asked with more curiosity than disdain as he surveyed the room of more than a thousand guests, eager for an introduction.

As the ranks of the rich swell, moments such as these are increasingly common. The culture of the wealthy is disrupted once again.

The number of people with serious wealth across the globe is awesome at the moment, driven by the spread of capitalism and advances in technology. As norms are shattered, the rich gain new power to define their roles and responsibilities. In this competitive cohort, a new benchmark remains elusive.

Shall 10,000 roses festoon a ballroom? Perhaps, but the next night’s gala will dazzle guests with a tower of cereal boxes and a tornado of sneakers to be donated to the needy. The Astor 400 has long since been replaced by the Robin Hood 4,000: The New York-based poverty-fighting foundation builds its own ballroom within a cavernous convention center each year to accommodate its masses of untired affluent.

The trophy wife has been pushed aside for the alpha partner, an entrepreneur or best-selling author who can banter about the stock market or microbiology. A spouse or significant other takes an equal role in philanthropy, not merely planning parties but chairing prestigious nonprofit boards, even co-founding the company. Single-sex couples are part of the social fabric.

The wealthy no longer keep to their own clubs or countries. They count themselves members of a vast, global peer group who connect by text, social media, and even face-to-face at art fairs, Giving Pledge learning sessions, and annual conferences in Aspen, Beverly Hills, Sun Valley, and Davos. In this way, billionaires from developing countries quickly pick up the habits and concerns of those who’ve been steeped in wealth longer, though not necessarily that long. The hit novel-turned-movie Crazy Rich Asians depicts a newly wealthy family in Singapore living in rooms that imitate Versailles.

Old and new, tech and oil, African and Iowan: Globally, more than 2,100 billionaires collectively were worth $8.9 trillion in 2017—a jump of $1.4 trillion in just one year, the UBS/PWC Billionaires Report found. And that was just the wealth that could be detected. China has been minting them the fastest (recent setbacks notwithstanding) and more than half of new billionaires were from Asia-Pacific in 2017. The U.S. still has the most (for now)—about 585—plus lots of others who are quite well-off. Some 17.3 million Americans are millionaires, Credit Suisse data show. 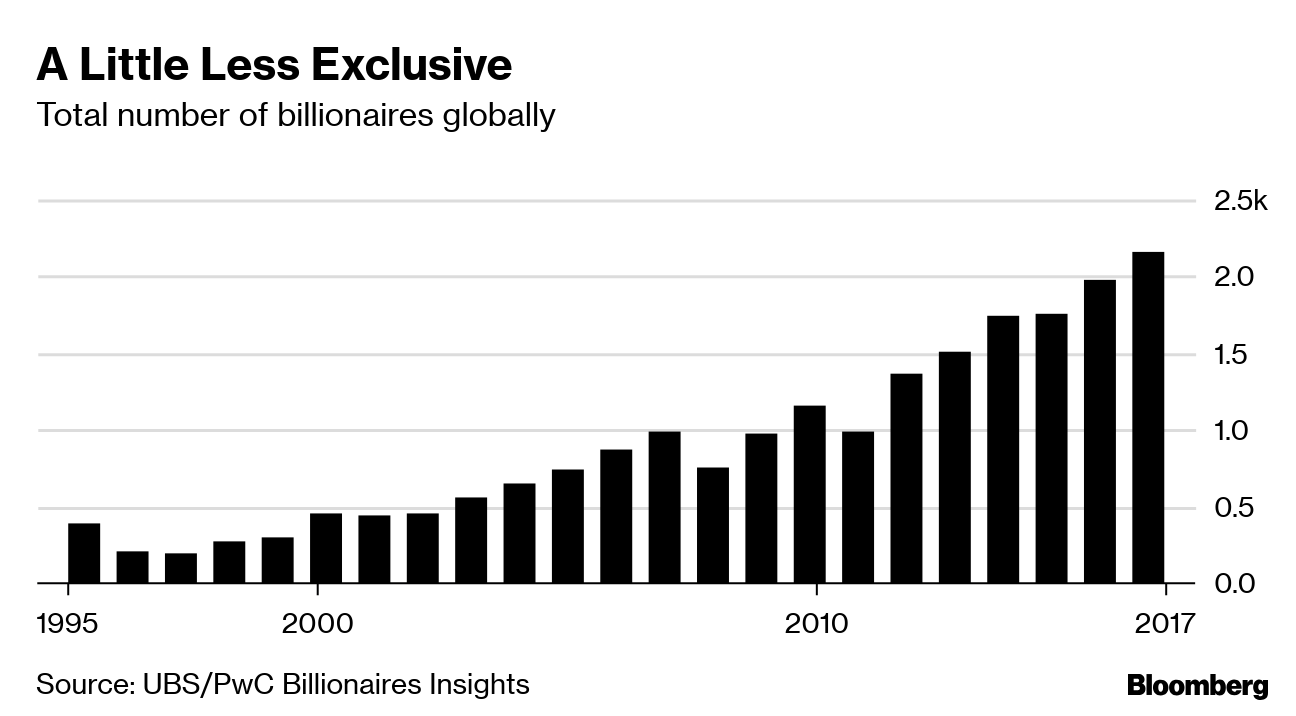 Income inequality is just one force suppressing the materialistic proclivities of the wealthy in the richest nations. The financial crisis, climate change, and populist political movements have produced an aversion to the conspicuous consumption of the 1980s. The dripping jewels and puffed egos displayed on Dynasty or Dallas have been replaced by the moody hedge fund chief on Billions, wearing jeans and a hoodie, who grabs a slice at his old neighborhood pizza joint. (Of course, he also delivers the kids to their little league baseball game in a helicopter.)

Today in New York, the mindful display of one’s position has been honed to an art form. The wealthiest women take pride in wearing the same dress a few times. The chicest apartments are decorated minimally—the furniture and objects cost a great deal, but do not draw attention to themselves like a 17th-century gilded armoire.

A proper household once required the right silverware and china; now taking the children to an animal sanctuary in Tanzania is the priority. Instead of taking months for vacations and pulling the children out of school on a whim, today’s rich are busier than anyone else and their children more heavily scheduled.

Like many others, the rich are obsessed with their health, only more so. They’re as likely to spend $1,000 on a guru or juice cleanse as on a Gucci shirt. The banquet will be nut- and gluten-free with lots of sustainably and locally sourced veggies and protein.

The car must be electric. The diamonds must not have blood on them. The cashmere sweaters carry socially conscious messages embroidered across the chest, such as the brand Lingua Franca’s tribute to Ruth Bader Ginsburg that reads, “all rise.” At $350, the cashmere is soft, with an enlightened edge: It includes a $100 donation to the American Civil Liberties Union. Suddenly, Loro Piana seems frivolous.

Every now and then, a rare indulgence is spotted: A $1,000 jeroboam or a $500,000 necklace, but it’s discreet (partly for security reasons), and there’s always a story behind it to justify the extravagance. As for the Picasso or Cy Twombly, art may be one of the last true trophies.

The social hierarchy has become less evident as rich people break the codes and expectations associated with their fortunes. The daily Bible study of John D. Rockefeller and the marriages in Jane Austen’s Pride and Prejudice and Edith Wharton’s House of Mirth might serve as guides, but so can the Instagram accounts of Lauren Santo Domingo, the fashion entrepreneur who married into a billionaire Colombian family, and of the Jenner and Kardashian clan.

The world’s second-wealthiest man, Bill Gates, devotes himself to building a state-of-the-art toilet for the estimated 2.3 billion people who live without modern plumbing. Donald Trump rises to the presidency positioning himself as a man-of-the-people billionaire with a taste for pomp and circumstance over charity.

Britain’s Prince Harry marries a mixed-race American divorcée. Seven months later, Beyoncé posts photographs of the dresses she wore to the Ambani family’s wedding festivities. The ceremony takes place in the 27-story Mumbai home of the father of the bride, Mukesh Ambani, the 11th-wealthiest man in the world. History is filled of examples with the indulgent and generous uses of money. A caliph enamored of a homesick Greek slave girl built an exact replica of her hometown, populated with thousands of his subjects. Hadrian rebuilt the Pantheon. Nero, upon seeing a 120-foot statue of himself he’d had built beside a private lake, declared, “At last, I am beginning to live like a human being.” At the height of the Gilded Age in 1889, Andrew Carnegie, who built libraries all over America and the world, wrote, “The man who dies rich, dies disgraced,” noting that large inheritances are “most injudicious.”

Warren Buffett, the third-richest person today, admits he hasn’t contributed “the most precious asset” to charity—his time. While he’s pledged to give 99 percent of his wealth away, he may be better known as the billionaire who gets his breakfast at McDonald’s every day.

In a communist-run country where the first private foundation is less than 15 years old, a handful of billionaires are rolling out their own agendas. These new philanthropists include Charles Chen Yidan who, in his 40s, left his job at Tencent Holdings Ltd. to focus on supporting education.

All of the capital accumulating rapidly at the top is on target to make the heirs of baby boomers the beneficiaries of the largest intergenerational wealth transfer in history.

An investment banker once showed me a letter he wrote to his children as they came of age, explaining the multiple purposes of money.

The first is to provide for an appropriate lifestyle. “What does this mean? It means to live like a successful person of your age buying material objects and spending money on daily purchases appropriately. Some people like Porsches but live in small apartments; others smoke fancy cigars and wear old clothes. It is the pattern that matters.”

The letter also emphasized the freedom that wealth provides—his own children have pursued careers in education, not investment banking. “Money allows you to set goals without the first goal being monetary success.”

His closing point: “Money is to better society.”

The ultrawealthy have been taken to task lately for not doing enough on that score. It’s the topic of books including Winners Take All by Anand Giridharadas, who argues for challenging the systems that create inequities. A recent report from Bridgespan Group, a consulting and research firm that works with billionaires on philanthropy, contained the startling estimate that the charitable spending of ultrawealthy Americans in 2017 was just $45 billion, or 1.2 percent of their holdings. Globally, the number of people in need of life-saving assistance is almost 136 million, according to the United Nations; 69 million have been displaced by conflict and natural disaster.

Cities in particular have benefited from wealthy people committing time and money to building and guiding hospitals, museums, universities, and nonprofits. Some have their names on buildings. Some have served on boards and investment committees for decades.

More recently, trailblazers have emerged who are spending billions of dollars in their lifetime on philanthropy. Gates has his passion for toilets, for preventing malaria, and for finding ways to feed those most affected by climate change. Facebook Inc. founder Mark Zuckerberg and his wife are funding research into cures for disease. Bridgewater Associates founder Ray Dalio is pouring his money into exploration of the ocean. (Bloomberg LP’s founder and owner, Michael Bloomberg, has a foundation dedicated to causes including gun control, tobacco reduction, educational opportunity, and combating climate change.)

Some billionaires are focusing on the future. This is an exciting place to be, because it isn’t about solving problems that have hung around for centuries. It’s about what’s next for humans at all strata of society.

Jeff Bezos and Elon Musk are spending on space travel. Blackstone Group LP Chief Executive Officer Steve Schwarzman gave $350 million to MIT to open a college of computing. He’s intrigued by how artificial intelligence will transform the nature of work, and he’s doing his part to get his friends on board. At his Park Avenue home, he recently hosted an “AI cocktail party” where guests went gaga over the bartender robot who poured and served Champagne.

The man at the gala asked, “Who are these people?” The next question for him and his peers is, “What can we accomplish together?” Bridgespan proposes that billionaires could increase their giving by tens of billions a year if they can be connected to new channels, such as a national fund to help the poor—or Blue Meridian Partners, which pools donations and seeks to scale up proven solutions to problems faced by children and youth in poverty.

In taking on the life of the commons, the rich and the ultrarich can cooperate and crowdsource in a way their businesses and personal lives may never have quite called for. Perhaps in the future the wealthy will succeed in finding ways to stand up, not stand out, and remove the barriers that remain between themselves and their fellow humans.

Gordon reports on wealth and philanthropy for Bloomberg News in New York. This column doesn’t necessarily reflect the opinion of Bloomberg LP and its owners.

To contact the author of this story: Amanda L Gordon in New York at [email protected]