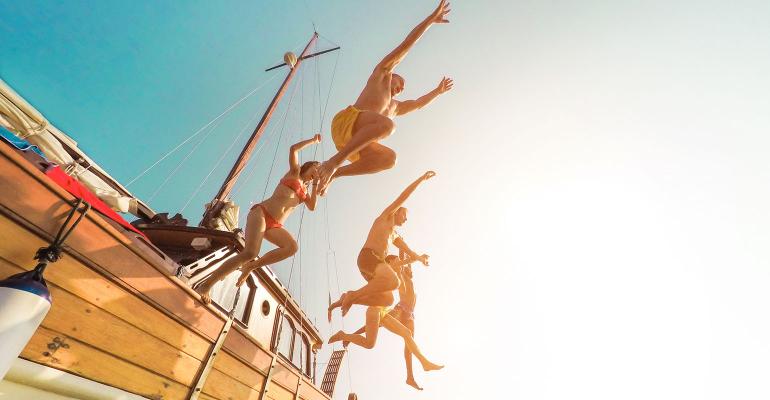 What Millennial Heirs Did This Summer: Lessons on How to Be Rich

Attendees at Next Gen functions hosted by the likes of UBS, Citi Private Bank, and Credit Suisse will one day rank among the world’s most sought-after clients.

They sip designer lattes and speak the language of wealth. The talk is of money, noblesse oblige, technology, Formula One. At lunchtime, out comes chilled rosé, with a tasting led by Jon Bon Jovi’s son Jesse.

Here, not far from Wall Street, Swiss banking giant UBS Group AG has convened its annual Young Successors Program (YSP), a three-day workshop for people who were born loaded. Part tutorial and part self-actualization exercise, the event is designed to stamp the UBS brand on the minds of the next generation of the ultra-wealthy—in essence, to hook them while they’re young.

With an average age of 27, attendees at the June YSP and other Next Gen functions hosted by the likes of UBS, Citi Private Bank, Morgan Stanley and Credit Suisse will one day rank among the world’s most sought-after clients. Or, at least, that’s the hope. In an era of extreme affluence, elite money managers are vying for the hyper-rich as never before. The world is poised for a generational shift in wealth that will ripple through global business and financial markets, and the banks can’t afford to take any accounts—current or future—for granted.

On one level, these programs—also held in cities such as Zurich, London and Singapore—represent high-end networking opportunities where the young and rich can be young and rich together.

The intimacy “allows them to let their guard down for a change,” said John Mathews, head of private-wealth management and ultra-high net worth for UBS Wealth Management USA.

The gatherings also allow private banks to show off the broad range of services they offer, which is crucial as investing becomes largely commodified—and in any case, isn't a topic that inspires passion among millennials.

So while one of Citi Private Bank’s Next Gen programs offers a day on financial theory and strategy, it also devotes a day to entrepreneurship and innovation and another to estate planning.

“We want young ones to understand that, as a scion of a wealthy family with a business legacy, you have responsibilities,” said the aptly named Money K., who heads up Citi's global Next Gen programs from Singapore. “Eventually you will inherit, so how should you think about it, and what are the rules on estate planning in different jurisdictions around the world?''

Invitees to the June UBS confab had at least one thing in common: a family account with the bank well into—or above—the eight-digit mark. They arrived from around the world and included seven sets of siblings. The youngest was 21; the oldest, 34. UBS executives agreed to speak about the gathering, and allowed a reporter to attend all but the evening activities, on the condition that participants not be named.

Fusty these affairs are not. For one cocktail reception, UBS chose a penthouse with a terrace atop the Beekman Hotel, a renovated Gilded Age office building. Brown Brothers Harriman & Co.—about as old-school as it gets, with a history going back to 1818—hosted 40 offspring of its best clients at the chic Soho Grand last year. Morgan Stanley’s private-wealth management businesswent for a different hipster vibe, taking over the bowling lanes at Lucky Strike in Manhattan for the 100 attendees of its Next Gen program in May.

Since many millennials want to run their own businesses and like to learn from peers, Morgan Stanley included a “Shark Tank”-style session with young social entrepreneurs pitching to a panel of three attendees.

“Socially responsible investing is a theme that really resonates,” said Mandell Crawley, head of private wealth management at the bank.

Personal branding also clicks with the younger generation, so Crawley headed up a discussion on “Defining Your Narrative.” Breakout talks included creating “a powerful package called ‘you’” and “how to communicate like a leader.”

Another popular theme is innovations in philanthropy, and wealth managers are increasingly keen to offer strategic advice. Checkbook charity doesn't appeal, but impact philanthropy does, because the results can be measured. The poster child for this may be Scott Harrison, 42, founder of Charity: Water, who spoke at the Morgan Stanley event and UBS’s June gathering.

Harrison’s story stretches from life as a nightclub promoter to head of a wildly popular nonprofit creating access to clean water in developing countries. His presentation showed photos of the grueling journeys many women and girls take to fill jerry cans with 40 pounds of water that isn’t even fit to drink.

Millennials are said to value experiences over things, so UBS had the group walk a mile with a similar can, switching off among themselves as they headed to a chic townhouse for cocktails. There, to get a different perspective, they donned virtual-reality goggles. The next morning, UBS announced it had donated $12,000 in the YSP group’s name to build a well.

Jesse Bongiovi shared some thoughts during one of the lunches, along with the rosé wine, Diving into Hampton Water, that he launched with his Grammy-winning father. The 23-year-old got some inspiration on marketing the rosé when he was an attendee at last year’s program, after hearing a presentation on disruptive innovation from Luke Williams, a professor of entrepreneurship and marketing at New York University Stern School of Business and regular speaker at the UBS workshops. Fast cars—really fast ones—entered the mix, too. Nico Rosberg, a 33-year-old Formula One champion, spoke about his new focus on cutting-edge startup investing. Silicon Valley technologist and venture capitalist Evangelos Simoudis, of Synapse Partners, also spoke.

Networking breaks punctuate the sessions, and the food can be as trendy as the venues. At the UBS event, attendees could try out a La Colombe draft latte machine or grab a fresh bottle of Voss water to wash down artfully arranged, freshly baked mini-doughnuts and pretzels with cheese dipping sauce, or a healthier concoction involving chia seeds, dried papaya bits and mint.

All the informal mingling has led participants to become best friends, marry, vacation together and invest alongside each other, the banks say. Bongiovi hooks up regularly with five guys he met in the program, and UBS’s Mathews said one set of alums dubbed themselves the “Group of 13” and convene every year to talk about family issues.

The banks often set up LinkedIn groups or Facebook pages and host events during the year, such as UBS gatherings at Art Basel in Miami Beach.Credit Suisse may have the most elaborate networking program. Thirty-five sons and daughters of the bank’s most valued clients go through its six-day Young Investors Program (YIP) and so become part of its Young Investors Organization (another acronym: YIO). YIP alums head up the group, which has more than 1,300 members from 55 countries and has regional, local. and global meetings.

Sparking communication between the heirs and their parents may yield the biggest dividends for wealth managers, however.

“I went home and asked my parents a million and one questions about how things are set up,” Bongiovi said. He met the family’s adviser, and they’ve gotten together a number of times since then. Bongiovi said he is now a lot more familiar and involved with his family’s situation and their next steps.

And, of course, he’s more familiar with UBS. Mission accomplished.