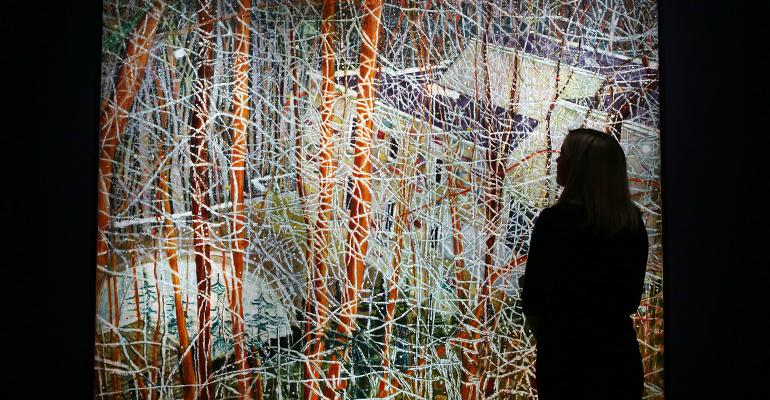 What Happens When You Unexpectedly Buy That $20 Million Painting

Peter Doig's "The Architect's Home in the Ravine" has been sold so often one dealer calls it a “frequent flier."

(Bloomberg) -- Just 15 months after Peter Doig’s “The Architect’s Home in the Ravine” fetched $20 million at Sotheby’s, the landscape is back on the market.

Displayed at the Gagosian booth this week at Art Basel with an asking price of $25 million, it’s one of the most expensive works at the world’s top modern and contemporary art fair.

The painting, which has been sold so often one dealer calls it a “frequent flier,” last appeared at Sotheby’s in March 2018 in London, where the auction house used an increasingly common financing technique to reduce its risk. In exchange for a fee of about $1 million, client Abdallah Chatila made an irrevocable bid that ensured the work would sell. No one made a higher offer, and he ended up taking it home.

“It sold twice for the world record for the artist and I believed it would set the record for the third time,’’ Chatila, 44, a Geneva-based investor, said Wednesday in a phone interview. “I ended up with it.”

Such outcomes have become more common in the past year as auction houses increasingly turn to third-party investors to place prearranged bids in exchange for a share of the profit from the sale. Expensive works that ended up with their backers include Andy Warhol’s “Double Elvis [Ferus Type],” which went for $53 million at Christie’s in May, and Jean-Michel Basquiat’s “Pollo Frito,” bought by the guarantor for $25.7 million in November at Sotheby’s.

“When the market is going up an up and up, easy money was made on guarantees,” said Thomas Danziger, a partner at Danziger, Danziger & Muro. “Now that the market is not as robust, people end up being the proud owners of the works they didn’t expect to own.”

And like the Doig landscape at Art Basel, which has been offered at auction five times since 2002, an increasing number of works are making the round trip for resale, Danziger said.

A painting of a carpet by Rudolf Stingel, which fetched about $3 million at Christie’s in Hong Kong in 2017, is listed on Sotheby’s website as part of its June 26 contemporary art sale in London. It’s estimated at $1.5 million to $2.3 million.

A Christopher Wool painting, spelling the word “FOOL” in big capital letters, which was bought by a guarantor for $14.2 million at Christie’s in 2014, sold last month for $14 million at Sotheby’s.

Lower prices for resales are not uncommon.

“If these pictures return to the market very soon, people realize that the value is not what the auction prices reflect,” Danziger said. “It’s not a competitive situation. Someone made a bet and ended up being the only bidder.”

For seasoned collectors, guarantees used to be a sure way to get a good deal. They either got the work they wanted at a slightly reduced price, or they received a fee if the painting sold to someone else.

“Guarantees are brilliant if you want to own the work,” said Gabriela Palmieri, who advises collectors, including the Berkowitz Contemporary Foundation in Miami. “Otherwise it’s not worth doing at all. Unless you really know the market of the artist, you are playing with fire.”

Chatila, who also invests in diamonds and real estate, said he’s been guaranteeing art for 10 years. “Last year, the market was slightly softer,” he said. “I ended up buying most of them.”

He said he’s selling “The Architect’s Home in the Ravine” to buy “another very important painting,” and still thinks he got a good deal on it. “I believe it’s worth much more,” he said.

--With assistance from James Tarmy.

To contact the reporter on this story:
Katya Kazakina in New York at kkazakina@bloomberg.net

To contact the editors responsible for this story:
Pierre Paulden at ppaulden@bloomberg.net
Steven Crabill