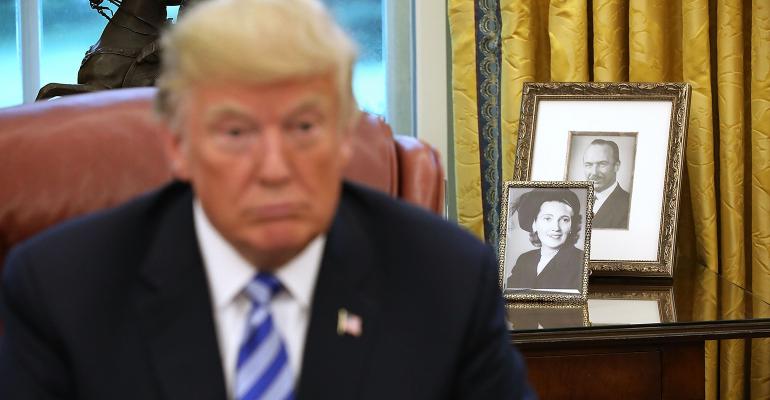 What Can Fred Trump’s Estate Teach Us?

There’s a fine line between tax avoidance and tax evasion under our broken system.

The president’s propensity for fudging the numbers runs in the family.

That’s the main takeaway from The New York Times’ exhaustive look Tuesday at the myriad of methods that the president’s father, Fred Trump, used to minimize taxes while transferring his wealth—$413 million—to his children.

What’s interesting is just how permissive the gift and estate tax regime is to those willing to fudge the truth, sometimes brazenly.

It’s important to note that, despite the tenor of the piece, the majority of the estate planning techniques that Fred Trump used don’t appear to be particularly underhanded or even necessarily illegal. The estate and gift tax regime is a labyrinth of ever-shifting rules that ensure the goalposts for what is and isn’t kosher are constantly moving. Adding to the confusion is the relative lack of enforcement that characterizes an underfunded and understaffed Internal Revenue Service. One of the major challenges facing estate planners working with high-net-worth clients is crafting a tax plan meant to hold up (hopefully) many years into the future while still maximizing tax savings in such a constant roil.

As such, many high-end estate planning techniques exist in the regulatory cracks. Some of the most brazen actually involve self-reporting to the IRS to get the statute of limitations started. The interactions are so complex and underexplored that there’s hope that even if the IRS decides the technique is illegal, it may take longer than the 3-year statutory period to do so. Fred Trump’s estate casts light on just how rife for exploitation (legal or otherwise) the system has always been.

Certain aspects of Fred Trump’s estate, such as the shell companies he allegedly set up with his kids or his blatant underreporting on income and gift tax returns, don’t really pass the smell test. But there’s a reason the experts quoted in the article largely hedge their language short of declaring that something illegal went down. Part of that reticence may be fear of backlash, but most of what Fred Trump did, technique-wise, seems legal, or at least difficult to determine. And, contrary to what you may have heard, numbers can be hard to prove.

Grantor retained annuity trusts, for example, used by Fred Trump to great effect, are described in the article as “one of the tax code’s great gifts to the ultra-wealthy.” This assessment is demonstrably true, both in the value of GRATs to HNW individuals and in the fact that they were perfectly legal under the tax code at the time (and still are). Though the valuations Trump used when creating these trusts is a bit fishy.

Valuations are perhaps the most easily fudged and most difficult to disprove numbers in tax reporting. They rely largely on the individual whims of independent appraisers. The vast majority of appraisers are honest people giving professional opinions as to what something is worth. However, there’s no single set of rules that governs what criteria an appraiser must apply in any given circumstances, so different appraisers can apply different techniques to the same asset and end up with wildly different results.

The highly favorable appraisals the family received from Robert Acken, as reported in the piece, seem ridiculous on their face. But the nature of the appraisal process makes it difficult to prove that they were incorrect and even more so to determine by how much. Furthermore, even when the IRS stepped in and enforced higher valuations, the numbers never even approached full market value. It’s difficult to say exactly why this is, but the IRS’ main purpose is to produce revenue for the U.S. government, and litigating against the ultra-wealthy is a costly proposition. These factors likely played a role. As the article notes, “From the perspective of an I.R.S. auditor, pulling in nearly $5 million in additional revenue could be considered a good day’s work. For the Trumps, getting the I.R.S. to agree that Fred Trump’s properties were worth only $57.1 million was a triumph.”

Although the Times piece was largely intended to cast aspersions on the president and his personal mythology, it also serves to illustrate just how dysfunctional our tax reporting and enforcement system is, how difficult the jobs of those who work in it are and how the ultra-wealthy benefit in the end, regardless of scruples.