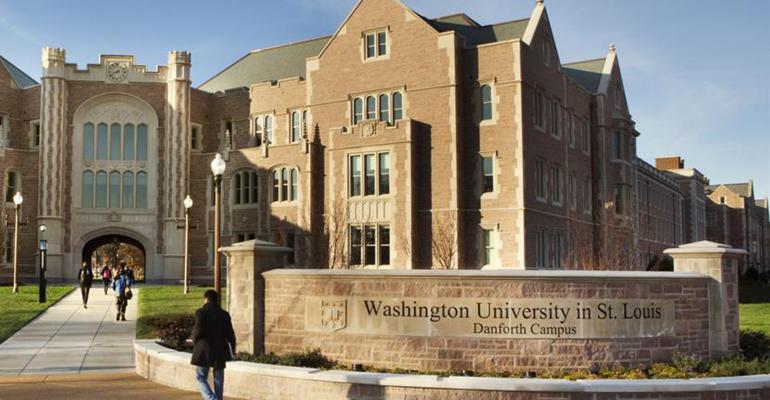 Scott Wilson, who is currently running Grinnell College's endowment, will start at Washington University in December.

(Bloomberg) --Washington University in St. Louis named a portfolio manager with trading experience to run its $8 billion endowment, the latest among several wealthy schools to fill these top investment jobs.

Scott Wilson, 41, is expected to start his new position in December, according to Eric Upin, the private school’s interim chief investment officer and managing director of Makena Capital Management.

“There was a very strong combination of talent and experience, endowment investing and broad market experience,” said Upin, a member of Washington University’s investment committee and a school trustee.

Wilson replaces Kimberly Walker, who departed Dec. 31 after a decade of posting steady returns in sometimes turbulent markets. The fund’s $8 billion value is as of June 30, and the school expects to report the fiscal 2017 return next month, Upin said.

Wilson joined the Grinnell investment office in 2010 as director of investments and was promoted to his current position in 2013. The Iowa school relies on its endowment for more than half its operating budget. Grinnell said in a statement that it’s finalizing details of a succession plan.

At Grinnell, which had $1.6 billion in assets as of June 2016, Wilson evaluated global investment strategies in equities, fixed income, real assets, and marketable alternatives, including portfolio overlay and hedging options. He said in an interview that the bulk of the portfolio was in large-cap domestic equities when he started at the endowment.

The fund gained about 10 percent on average in the past five years, according to Wilson. Grinnell’s one-year return of 20.4 percent in fiscal 2015 was one of the highest among wealthy endowments.

“Endowment returns are among the biggest and most critically important drivers of success for research universities today, and Scott brings the right mix of talent and experience to the position,” Washington University Chancellor Mark S. Wrighton said in a statement.

Wilson was previously head of the Asia interest rate option trading desk at Barclays Capital in Tokyo. He was also a quant and options trader at Bank of America Securities in Chicago, London and Tokyo, focusing on interest rate, equity and currency derivatives. He earned a bachelor’s degree in economics and mathematics at Grinnell.