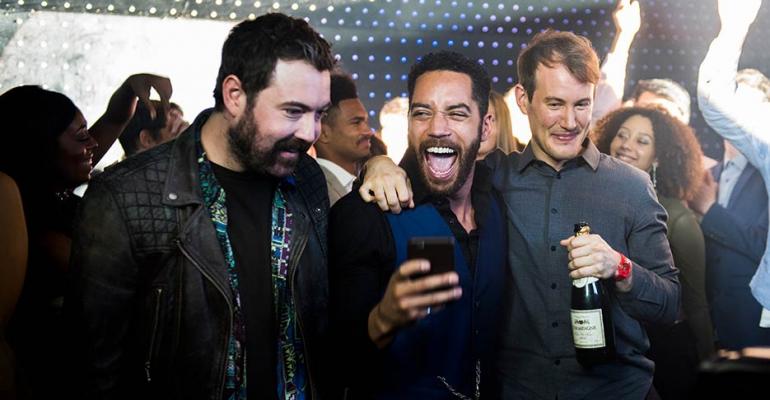 AMC launched a new series on Monday night called "Loaded," featuring four British guys reacting poorly to a windfall of money. The quartet fell into their riches after selling a hot tech startup and video game to a large company. As a result, they've gone from near-poverty to extreme wealth. According to The New York Times, "Whether it’s lottery winners or athletes who land huge contracts or geeks with the next big tech thing, this is a storyline of our age: people coming into vast amounts of money who aren’t prepared for it." Each of the characters bungles their fortune in their own way. One flaunts his wealth, another tries to use his riches to win back an ex. "In many ways, money is the main character," the Times reports. BlackRock CEO Larry Fink says it will be hard for the U.S. to reach Donald Trump’s 3 percent annual growth target. Fink says that while the rest of the world is on an upswing, Federal Reserve Chair Janet Yellen is right that growth at home will be more like 2 percent to 2.5 percent. “The world feels very good,” told Reuters on a call about BlackRock’s second-quarter earnings. “There’s still some dark clouds in the United States.” Fink isn’t alone in his sentiments. JPMorgan Chase CEO Jamie Dimon talked about Washington politics on Friday, saying it is “almost an embarrassment being an American citizen traveling around the world.” Citi has overhauled its Prestige luxury credit card, giving users who spend at least $8,000 new perks like free nights at pricey hotels and an increased sign-up bonus. The changes, which go into effect July 23, include 75,000 "ThankYou" points for new cardholders who spend $7,500 on their card in the first three months. That's a bonus of up to $935. In addition, cardholders will receive an annual $250 air travel credit, $100 credit for global entry or TSA Precheck application fees, three points on air travel and hotels, two points on dining and entertainment, and one point per dollar on all other purchases. Cardholders get access to Priority Pass Select Lounges, travel and emergency assistance, and access to the company's concierge service, MarketWatch reports. The card does still come with a $450 annual fee.