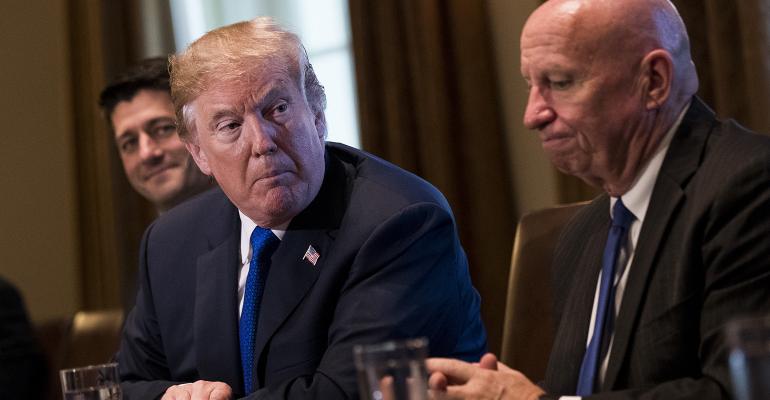 About 60 percent of the tax cuts will be from corporate tax reduction, another 20 percent through the business pass-through reductions, and the remaining 20 percent to individuals.

By Sahil Kapur and Steve Matthews

(Bloomberg) --President Donald Trump and congressional Republicans billed their tax overhaul for months as a benefit primarily for the middle class, but what they delivered Thursday was designed more to favor large corporations and some closely held businesses.

About 60 percent of the tax cuts will be from corporate tax reduction, another 20 percent through the business pass-through reductions, and the remaining 20 percent to individuals, according to an analysis of the initial plan by Mark Zandi, chief economist at Moody’s Analytics Inc. in West Chester, Pennsylvania.

“The bulk of it is through corporate tax changes and changes to pass-through entities. This is really a cut to business,” Zandi said. “The preponderance -- the vast majority -- of tax cuts go to business.”

Trump’s economic advisers have said that cutting the corporate rate will increase wages, lifting average household income by at least $4,000. Other economists question that finding. But beyond that, the specifics in the new House bill would create winners and losers, especially among those who itemize their tax deductions.

“If you live in a high tax state, are an itemizer, buy a house with a big mortgage, have medical expenses or casualty losses, you will likely be a loser,” said Howard Gleckman, a senior fellow with the nonpartisan Tax Policy Center. “If you take the standard deduction, are married without kids, and have a pass-through business, you will be a winner.”

The proposal unveiled by the House Ways and Means Committee on Thursday is sure to change significantly before it gets a vote by the full House. It will be revised yet again once the Senate, where passage will require delicate compromises, finishes work on its version. Based on what was released on Thursday, here’s a look at who comes out ahead and who gets left behind, according to tax experts.

The corporate tax rate is slashed to 20 percent from 35 percent , a sharp reduction that will benefit many businesses that don’t already reduce their tax bills to under 20 percent as a result of loopholes and deductions.

“Today, the effective tax rate for the S&P 500 companies is only at 29%. We expect it to end up in a 21-22% range after the tax reform.” Deutsche Asset Management said in a report Thursday. Repatriation of foreign earnings is likely to lead to higher equity buybacks.

Cutting the corporate rate was one of Trump’s central tax promises. The White House argues that it ultimately will result in higher wages and, thus would benefit middle-income workers by encouraging companies to keep profits and operations in the U.S.

During his campaign, Trump highlighted carried-interest, labeling some hedge fund managers as “paper pushers” who are “getting away with murder.” As recently as September, Trump economic adviser Gary Cohn said the president was committed to ending the carried interest tax break.

Partnerships and other "pass-through" businesses that file taxes as individuals enjoy a steep rate cut from 39.6 percent to 25 percent — an overall tax cut of $448 billion over a decade, according to the Joint Committee on Taxation.

However it places limits on the kind of income that would qualify. For example, providers of professional services, including doctors, lawyers, accountants and others, wouldn’t automatically qualify for the lower rate.

Trump has sold this as a break for small businesses, but the National Federation of Independent Business said it can’t support the plan because it “leaves too many small businesses behind.”

Individual rates would be consolidated from seven to four. Wage earners who use the standard deduction would see it roughly double to $12,000 per person. If they don’t itemize deductions, that would lead to a substantial decrease in their taxable income.

“From an individual basis, the average wage earner who’s not itemizing now is probably ahead” due to this tax plan, said Warren Joseph, a tax policy expert with BNA Tax.

Andrew Hunter, an economist with Capital Economics, said the combination of the rate structure, the doubling of standard deduction, the higher child tax credit and other provisions would be worth about $1,200 for a family of four making the median income of $59,000 annually. That’s about a two percent increase in disposable income.

For millions of taxpayers, filing will get easier with the doubling of the standard deduction and the repeal of the Alternative Minimum Tax.

Among the biggest losers would be big families with higher incomes who live in states with high income and property taxes. They would lose the state and local deduction (with the exception of a $10,000 cap on deducting property taxes) as well as personal and dependent exemptions worth $4,000 per family member. For many, the doubling of the standard deduction won’t make up their losses.

“Upper middle income households in high tax states will be dinged the most,” Zandi said. “For very high income households, it is probably a wash, though they would benefit from the estate tax” elimination.

There are changes in store for charities and other non-profits. By increasing the standard deduction, advocates for those groups say it could erode the deduction for charitable giving, which remains in the tax code.

"A lot of charities are having a problem with this," Joseph said. "Before, you might’ve written a check for $200 to the Leukemia & Lymphoma Society; now you’re not going to get a deduction for it, so maybe you’re only gonna write it for $150."

And the eventual repeal of the estate tax means people would be less likely to give their fortunes away to charity to avoid paying the 40 percent levy, as many wealthy people currently do in their estate planning. Joseph said that for this reason, charitable groups will have "a problem with the estate tax disappearing."

No break for high medical expenses

The deduction for out-of-pocket medical costs -- including such items as prescriptions, drug-addiction treatment and services for special needs children -- would disappear. Almost 9 million taxpayers deducted about $87 billion in medical expenses for the 2015 tax year, according to the Internal Revenue Service.

That will negatively “impact people with relatively low income and a lot of medical expenses,” Joseph said

"Low-income people might end being worse off because they’re really not getting anything from the bill and they might end up bearing the cost of cutting big safety net programs," Burman said.

The House tax plan would eliminate a $7,500 per vehicle tax credit that has helped stoke early demand for electric vehicles. That likely will hit carmakers offering those vehicles such as Tesla Inc., General Motors Co. and Nissan Motor Co. Ltd.

“That will stop any electric vehicle market in the U.S., apart from sales of the highly expensive Tesla Model S,” said Xavier Mosquet, senior partner at consultant Boston Consulting Group, who authored a study on the growth of battery powered vehicles. “There’s no Tesla 3, no Bolt, no Leaf in a market without incentives.”

Buyout firms and highly leveraged businesses may be hit by a provision capping the deduction for interest at 30 percent of adjusted taxable income, from 100 percent now.

Businesses with gross receipts of $25 million or less would be exempt from the new limit. Also exempted would be public utilities and real estate companies.