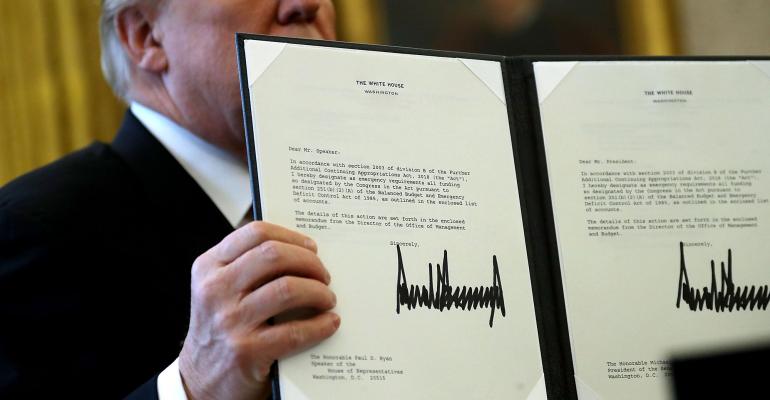 It’s been a mixed bag for taxpayers.

One year has passed since significant tax law changes were enacted in December 2017. The overall impact of the Tax Cut and Jobs Act of 2017 on estate and tax planning for individuals and their families is close to what we expected—it’s been a mixed bag for taxpayers.

High-net-worth taxpayers gained significant estate tax benefits and estate planning opportunities. But from an income tax standpoint, high income individuals who derive income primarily from service industry businesses, investments and/or employment earnings are among the potential losers due to the loss of deductions for state taxes, investment expenses and other itemized deductions. The same goes for trusts.

The income tax burden has been reduced for C corporations, and those businesses are already reaping the benefits. It’s unclear what the overall tax benefits will be for businesses with flow-through tax treatment, as it largely depends on the nature of the business.

One of the most challenging aspects of the TCJA is that virtually all of the provisions related to an individual’s personal tax planning and estate plan—in fact almost all the provisions in the entire law—are temporary. Absent further Congressional action, the provisions terminate at the end of 2025.

Here we take a closer look at the major changes—the winners and losers—under the new tax law.

The $11.18 million amount will continue to be inflation-adjusted annually. This change makes an already narrowly focused estate tax applicable to even fewer taxpayers. With proper planning to ensure full use of both exclusion amounts, a married couple now can shelter up to $22.36 million from federal estate tax. Even before this change, the significant increases in the exclusion amount could produce unintended consequences in estate plans that allocated assets based on the “maximum exclusion available.” With this doubling of the exclusion, it’s even more important to review the estate plan to determine if the allocation of property still works as intended.

Married couples with less than $11 million, and single individuals with less than $5.5 million, can safely assume that they face no federal estate tax. This means their estate plans can be simplified. However, state death taxes still are a concern in a number of states, including New York, Illinois, Massachusetts and Pennsylvania. The marginal state death tax rate in the majority of these states can be as high as 16 percent for taxpayers with assets of $11 million or more. It’s especially important that married couples in these states take steps to use their state exclusions. In Illinois, for example, basic planning steps to minimize the state death tax for a married couple can save almost $500,000.

For estates well in excess of $11.18 million, or $22.36 million for a married couple, lifetime planning to reduce the estate tax is still a priority. Gift techniques such as long-term irrevocable trusts, grantor-retained annuity trusts and sales to grantor trusts play an important role. It’s especially important to focus on making use of the temporarily increased exclusion and generation skipping tax exemption. The strong expectation is that exclusion and GST tax exemption used on lifetime transfers won’t be recaptured if the exclusion reverts to $5 million (indexed) in 2026. As expected, taxpayers in this HNW category are focusing on ways to use the increased exclusion but aren’t rushing. The increase is scheduled to sunset at the end of 2025 and could be reduced earlier, but nothing is imminent, and we’ll have plenty of advance notice. It’s possible to take the time to focus on maximizing the benefit of using the exclusion and preserving flexibility.

Estates between $5.5 million and $11 million are in the most difficult position. Clients with assets in this range may end up facing a significant federal estate tax bill, but not in the next seven years if the current exclusions last that long. They may want to proceed cautiously with lifetime gifts, in particular gifts of appreciated assets. If their estates aren’t subject to estate tax, it would be better to leave the assets in the estates and receive a step-up in basis. Cash gifts are preferable, as is the use of grantor trusts, so that an asset transferred to the trust could be swapped out of it at a later date and included in the estate if it’s appreciated significantly. This enables the taxpayer to get a step-up in basis for the asset. Taxpayers in states with state death tax also must take that tax into account.

Because of the increased exclusion, many taxpayers with existing irrevocable trusts may no longer need the trusts to minimize estate tax. These trusts of course can serve several important non-tax purposes, including management of the trust property, protecting against imprudent spending and protection from creditors or a divorcing spouse. For these reasons, it may not be wise to terminate the trusts. However, it may be desirable to have the trust included in the primary beneficiary’s estate to obtain a step-up in income tax basis for the assets. For both these existing trusts and new irrevocable trusts, we now focus on ways to modify or structure the trusts to permit a basis step-up where that’s desirable.

The increase of the GST exemption to $11.18 million provides a welcome planning opportunity for clients who want to create long-term, multigenerational trusts. In addition to new transfers to use the increased GST tax exemption, clients should be able to use the GST tax exemption on trusts they previously created but didn’t make GST tax-exempt. Based on the effective date language in the statute, there’s a question about the ability to allocate GST tax exemption to pre-2018 transfers. Treasury officials informally have stated they don’t intend to interpret the law to preclude such allocations.

The top income tax bracket decreased from 39.6 percent to 37 percent, while the lower rate brackets expanded. High income taxpayers lost the deduction for state income and property taxes above $10,000 and the miscellaneous itemized deductions. As a result, the overall impact on income taxes can be negative.

Example: Anthony and Marcia file jointly. They have earnings from employment and Marcia’s business income from an investment firm of $1.2 million. They also have $10,000 of investment income taxed at ordinary rates and $220,000 of dividend and capital gains income. Their state income tax is $52,000, and they paid $24,000 in property taxes on their two homes. They make $30,000 of charitable contributions. They paid investment fees and other miscellaneous itemized deductions of $68,000. In 2017, their federal income tax with these numbers would have been $403,953. In 2018, it’s $413,619.

Although trusts will benefit from the modestly lower top rate of 37 percent, in other respects, the changes to the trust tax brackets were detrimental. In 2018, the top bracket for trusts starts at $12,500. The 3.8 percent net investment income tax applies for trusts with adjusted gross income above $12,500. In addition, and most significant, trusts face the same elimination of deductions that individual taxpayers face. While trustee fees still will be deductible, trusts no longer will benefit from any deduction for investment advisory fees, and the deduction for state taxes will be limited to $10,000.

The impact of changes in the charitable area may prove to be a mixed bag. Clearly, the new rules have simplified tax reporting for many Americans by increasing the standard deduction and suspending one of the more pervasive phase-out limitations on a tax benefit. But many people believe the changes will hurt charities by decreasing tax incentives for charitable giving.

The TCJA eliminated the so-called “Pease” limitation, which phased out itemized deductions at a rate of 3 percent for each dollar of income above certain thresholds. This is a benefit for many charitably inclined taxpayers. At the same time, the increase of the standard deduction to $24,000 together with the repeal or new limits on many other deductions means that many taxpayers won’t receive a direct income tax benefit from charitable contributions. A taxpayer over aged 70½ who has an individual retirement account and makes more modest charitable gifts may wish to start using the charitable rollover provision, which allows the taxpayer to exclude up to $100,000 of a required minimum distribution from gross income by directing it to charity. This provides a tax benefit regardless of income level.

Finally, bad news for college sports fans. The TCJA prohibits donors from deducting amounts donated for the right to purchase tickets to college athletic events. Prior law allowed a deduction for 80 percent of such payments.

Winners: Owners of flow-through business entities not in service businesses

Business owners should pay heed to the new pass-through deduction. The Internal Revenue Code Section 199A deduction for up to 20 percent of “qualified business income” for S corporations, partnership and limited liability companies may provide planning opportunities for families that own some of their business interests in trusts. Qualified business income means business income connected with conduct of a U.S. trade or business. There’s no deduction for foreign income or investment income earned in the business. For business owners with income below specified thresholds ($157,500 for single taxpayers and $315,000 for filing jointly), the 20 percent deduction is limited only by the overall cap of 20 percent of the taxpayer’s taxable income (excluding capital gains). For higher earning taxpayers, the deduction is limited or eliminated in two important respects. First, income from a broad category of service business won’t qualify for the deduction. This includes businesses in the fields of health, law, accounting, actuarial science, consulting, performing arts, athletics and financial services. Second, for all other businesses, the 20 percent deduction can’t exceed the greater of: (1) 50 percent of wages that the business paid in the year or (2) 25 percent of wages paid plus 2.5 percent of unadjusted basis of business property. Thus, the deduction is designed to most reward labor and capital intensive flow-through businesses. By transferring business interests to separate taxpaying trusts, an individual can create additional taxpayers with income below the threshold levels and capture more IRC Section 199A deduction. However, the Internal Revenue Service already has proposed regulations that will place some limits on the ability to create multiple trusts to take advantage of this planning opportunity.

Simplification of the “Kiddie Tax”

The Kiddie Tax applies to children under aged 19 or under 24 if a student who receives less than half his support from earned income. Since the original enactment, these rules have required that the unearned income over a threshold be taxed at the parent’s rates. This was a complicated and annoying calculation. The TCJA eliminated the significant tax reporting complications of this system by providing that income subject to the Kiddie Tax will be taxed under the rate table applicable to trusts and estates.

This is no longer permitted. It was often was a valuable option under prior law. If the IRA value fell after the conversion, the owner could unwind the conversion before the filing date (including extensions) of the tax return reporting the conversion and decide whether to do it later.

There are two changes unrelated to the new tax law that are noteworthy and very relevant in estate planning for HNW families.

The IRS has finalized regulations that change the rules for auditing partnership tax returns. The primary change is that tax deficiencies determined in a partnership audit may be collected from the partnership itself, unless the partnership elects to “push out” the deficiency to its parties. This will make it easier for the IRS to conduct partnership tax audits. Most family investment partnerships won’t be able to make this push out election. Families with partnerships and LLCs, whether operating as business or investment entities, should consider amending their governing agreements to address the new rules.

Effective Jan. 1, 2018, the increase is the result of an inflation adjustment. These adjustments occur less frequently because the minimum required increment is $1,000. The last change was in 2013.