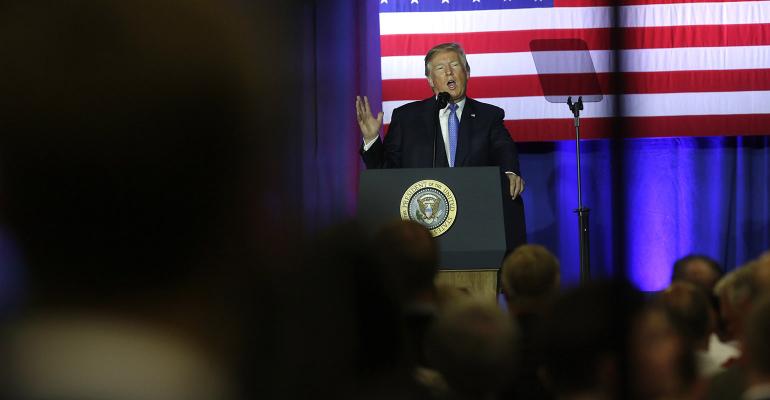 Accelerated depreciation would boost growth. Pass-through treatment for business owners is a sop to the well-off. And tax cuts just widen deficits.

(Bloomberg View) --A broad new set of tax policies have been proposed by the White House and Republican congressional leaders. They involve both tax reform and tax cuts.

Before it gets away from us, I have one small plea to make: Can we please have an honest debate about tax policy? For once, I would like to see a discussion that doesn't resort to magical thinking, faux austerity from deficit chicken hawks, and the usual unproductive partisan dance.

While there is much to chew on in the proposal, below are some of what I think are the most interesting ideas:

No. 1. Full depreciation of capital spending: Don't overlook the impact this could have on the economy. It is an underappreciated reform that would allow companies to write off their purchases as soon as they are made. Trucks, software, buildings and equipment now are depreciated over time. Under this proposal, most or all capital expenditures could be written down in year one. Spend $150,000 on a drilling rig or a truck, and that is set off against your profits by the same dollar amount in the first year.

This encourages companies to make capital purchases. Given that growth has been sluggish and distributed unevenly, this should be economically stimulative. Companies might prefer a lower tax rate to accelerated depreciation, but it is easy to understand why Congress likes this proposal.

No. 2. Business owner pass through: This has appeal, especially for small business owners using a limited liability company structure. Admittedly, this is a bit of a sop to the upper middle class, which frequently selects LLCs or partnerships as the preferred legal corporate structure. Owners of pass-through entities are now taxed at their ordinary income tax rate -- 39.6 percent for those with taxable income of more than $418,400 ($470,000 for married filers). The proposed plan would lower this rate to 25 percent. I know lots of folks licking their lips over this one.

No. 3. Unfunded tax cuts: This is the bullet point that generates the most magical thinking on the right. If you want tax cuts to be revenue-neutral, then you must offset the lower rates with some combination of eliminated deductions, closed loopholes and lower spending.

We have learned from past tax cuts, the beauty of supply-side economics isn’t that it reduces deficits or balances budgets; it's that gullible rubes believe it will. The reality of human behavior requires more than just an incremental change in tax rates to significantly alter economic behavior.

This is why the George W. Bush tax cuts made the deficit bigger while doing little or nothing to stimulate the economy. It is also why the income-tax cuts in Kansas caused the budget to significantly deteriorate.  It's why Ronald Reagan’s tax analysts, such as David Stockman and Bruce Bartlett, have all acknowledged that unfunded tax cuts don’t create growth. They only make the deficit bigger. You can come up with all sorts of counterarguments, but the overwhelming evidence is that people don't change their economic behavior for modest reductions in tax rates.

I don’t have a problem with this. I was never a big deficit hawk; and I wouldn't mind paying 15 percent less in taxes. But let’s at least be honest about tax cuts and understand that its supporters adhere to a belief system founded on the principle of the consequences be damned. The usual suspects who were harping about deficits under Barack Obama suddenly lost their voices once the occupant of the White House changed; reducing deficits suddenly became a nonissue. These faux fiscal hawks are intellectually dishonest, hypocritical and potentially even dangerous.

Anyone who believes the new deficit fighters care about deficits has not been paying attention. These new deficit hawks -- those who voted for an unfunded entitlement program (prescription drugs), who gave away trillions in unfunded tax cuts, who voted for a trillion-dollar war of choice -- are simply not to be believed.

I often begin public discussions of climate change by disclosing my excessively large carbon footprint: My house is too big for just two people, I own too many inefficient cars, a small boat and I travel a lot by air. However, that doesn’t mean I need to lie or engage in agnotology when discussing the many ways people affect the climate.