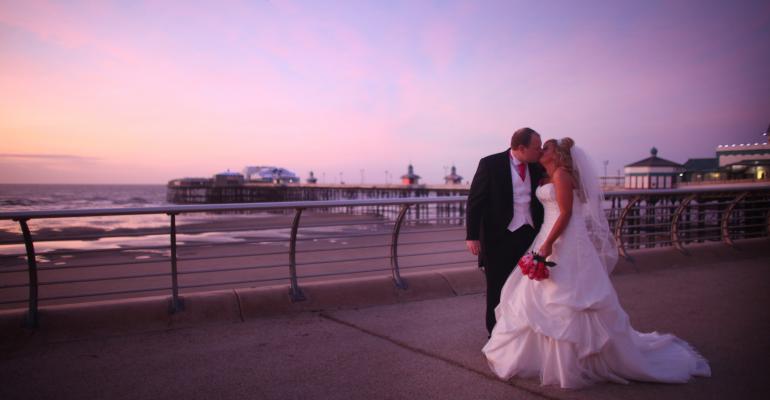 These Are the 25 Most Expensive Places to Get Married

If you want to tie the knot on the cheap, head to the Midwest.

(Bloomberg) -- Thinking of getting married? Move to Arkansas.

That’s where this increasingly expensive proposition is usually cheapest, according to a survey of 13,000 American brides and grooms who got hitched last year.

But being cheapest doesn’t mean inexpensive—Arkansas weddings ring in at an average of $19,522, says the annual poll by wedding marketplace The Knot. Meanwhile, the average cost nationally is now $35,329, the highest since The Knot first began collecting data in 2007. Manhattan is the most expensive place to get married in the U.S., with a massive $78,464 average spend. That hefty pricetag is just for the wedding itself—the honeymoon isn’t included. Reception, music, flowers, decor, videographer, attire, cake, invitations, transportation, favors, rehearsal dinner, and officiant all add up. The most expensive part in 2016 was renting the venue, which averaged $16,107 compared with $14,788 in 2015. The ring, band, and photographer weren’t far behind.

Though wedding costs are increasing, guest count isn’t going up. That means more money is being spent per attendee: $245 last year compared with $194 in 2009. The additional $51 is being used to personalize the experience and entertainment, The Knot found. For those invited to weddings this year, remember that figure when buying a gift (The old standby rule is “pay for your plate.”)

But toasters and dishware don’t really pay for the big day, parents do. While gender roles have evolved in the workplace, they haven’t at the altar. The bride’s parents pay, on average, for 44 percent of the wedding, compared with 13 percent shelled out by the groom’s parents. And only 10 percent of couples had to pay for it themselves.

So, at least there’s that bit of good news for the happy couple.