Memory loss in this context is more than simply forgetting a name or an appointment; instead, it includes forgetting recently learned information, important dates or events or repeatedly asking for the same information. Often, it’s a spouse or other close friend who recognizes the memory loss because the loss wouldn’t necessarily be apparent to a casual acquaintance (like an advisor).

Another symptom of a decline in cognition is displaying challenges in planning or problem solving. Examples include challenges in balancing a checkbook or coordinating a get together of friends. It isn’t uncommon for an individual with dementia to get lost while driving in familiar locations. A client with dementia may find making decisions about investments difficult when making those decisions in the past had been easy.

A closely related symptom is misplacing objects. Not to be confused with simply forgetting one’s keys, misplacement is often characterized by placing items in an inappropriate location, such as finding one’s keys in the freezer instead of on the counter or in a purse.

Yet another unusual symptom that may not be apparent to a casual observer is vision impairment and difficulty contemplating visual images or spatial relationships. Vision often changes with age; however, the added challenge with a spatial relationship is common with dementia. Many outside observers may simply believe the individual is becoming clumsy. The individual with dementia may trip over curbs or area rugs or may perceive dark parts of carpet and a transition in pattern to be holes.

A client in early stages of dementia may no longer choose to participate in activities that he once enjoyed. This is often a result of the client finding it difficult to follow conversations or engage in activities requiring planning or critical thinking, such as playing cards with friends.

5. Confusion With Time or Place
Daisy-Daisy/iStock/Getty Images Plus

One sign of dementia that advisors may more easily notice is confusion with time or place, such as believing appointments are on different days or confusing an appointment with a financial advisor with an appointment at an attorney’s office. Family members may not notice this small mix up, but advisors and staff will be aware of missed appointments or a client showing up for appointments on the wrong day.

New problems with words in speaking or writing are also a common sign of dementia. A professional may notice a client having difficulty following a conversation or finding the right word for an object or event. Instead of using an adjective or term, the individual may instead describe the item to which he’s referring.

7. Decline in Judgment
Highwaystarz-Photography/iStock/Getty Images Plus

Decreased or poor judgment is one of the most difficult symptoms of dementia to detect but is often one of the most unfortunate and disastrous. Professional advisors, particularly those who’ve worked with clients for many years, may be the first to notice a decline in judgment on their client’s part. Decreased judgment often leads individuals to take action such as gifting sums of money when they otherwise wouldn’t do so or wiring money overseas to pay taxes on purported lottery winnings.

8. Changes in Mood
delihayat/iStock/Getty Images Plus

An individual with dementia may become easily upset, afraid, depressed or fearful, even when in a familiar setting. Common symptoms occurring in early stages of dementia are irritation and anxiety. Don’t confuse personality changes resulting from dementia with occasional irritation or a bad mood. To be signs of dementia, these changes would be manifested as regular occurrences for six months or more.

Many of the aforementioned symptoms can be considered to be changes or decline in executive function. Executive function is the group of skills needed to control and coordinate all cognitive ability and behavior. It includes both organizational skills and regulatory skills, both of which are required to make sound, well-reasoned, decisions.

In addition to the common signs of early dementia, there are some less well-known symptoms or indicators. A study from Massachusetts General Hospital in Boston found a link between failing sense of smell, or at least the inability to identify certain smells, and dementia. While the exact link isn’t clear, there’s a link between sleep disorders and dementia. For quite some time, it was assumed that dementia caused a sleep disorder; however, some now believe that sleep disorders are a risk factor for dementia. Finally, frequent falling is also a lesser known sign of dementia. 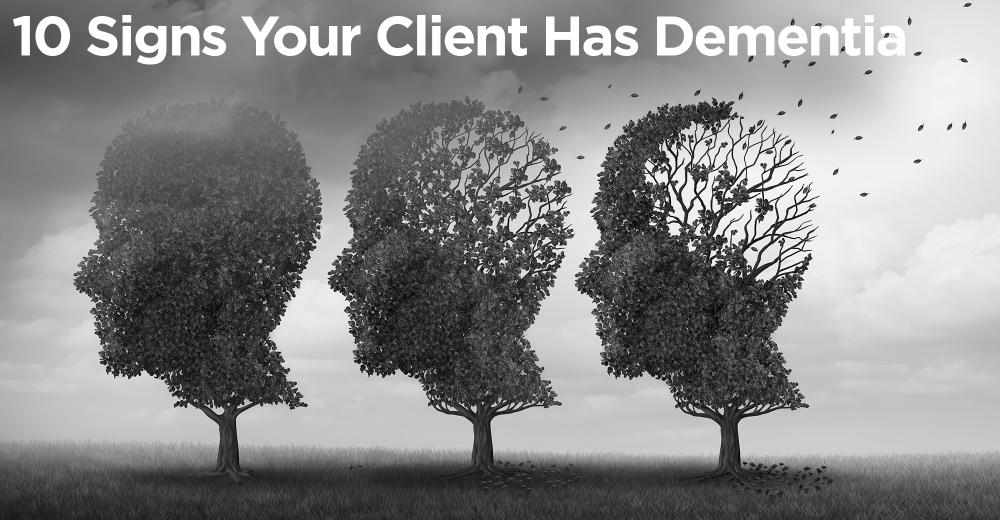